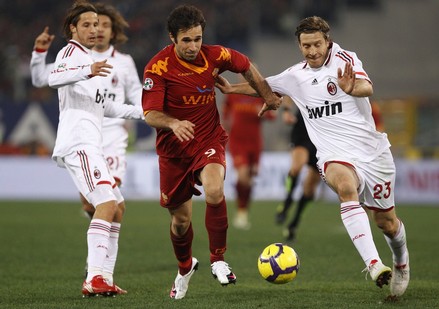 This year’s Serie A, promises to be an interesting and entertaining season , as clubs have now regained their momentum after years of difficulty, after Calciopoli which rocked Italian football for years. AC Milan, ended Inter’s dominance of the Italian league by winning their 18th League Championship, ahead of Inter Milan and have recently won the Coppa Italia, which puts them as firm favorites for this year’s Serie A. Teams like Juventus and Roma, have been busy in the transfer window ahead of the new season, and have bought some excellent players. This promises to be a fascinating Serie A.

After their Championship-winning season, AC Milan, have reinforced their squad with two excellent defensive additions in Taye Taiwo and Phillipe Mexes, who were both bought from Olympique Marseille and AS Roma, respectively, on a free transfer. Taye Taiwo, reinforces the left back role which has long been a problem for AC Milan as they have suffered without a quality left back, for a number of seasons ever since Calciopoli, so Taiwo is a great signing for the club. Phillipe Mexes, is another quality addition to Milan’s squad as he provides an excellent option at center back, alongside both the excellent Thiago Silva and the legendary Alessandro Nesta, as well as the reliable Mario Yepes.

Milan have done well in keeping their star player, Zlatan Ibrahimovic, who scored in the Supercup win over Inter Milan. Ibrahimovic, had a major role in helping Milan win the title, with his goals and assists, giving the extra edge Milan needed to win the title. Not only did AC Milan do well to keep Ibra, but also Kevin-Prince Boateng, who’s dynamic and physical approach, fruitful in AC Milan’s successful season.

AC Milan have done well this summer and in winning the Coppa Italia ahead of Inter, they must be considered as strong favorite to lift the title next season.

First, let’s start with Inter Milan, who recently lost the Supercup to rivals, AC Milan. The club have been going through all summer, with the Wesley Sneijder transfer saga and whether or not, he’ll leave for Manchester United. Inter Milan, reinforced their squad by signing talented Argentinian playmaker, Ricardo Alvarez, from Velez Sarsfield. Alvarez, has shown promise and his ability, by scoring 3 goals in 5 matches in pre-season and it seems like he’s an excellent buy for the Nerazzuri. Inter, haven’t really splashed out on players, unlike in previous seasons, and have spent more time dealing with rumored departures, especially regarding star player Wesley Sneijder.

I believe that they need to focus on re-inforcing their defence, as most of their defenders are 30 or older, and could do well with young, quality defenders for the future. But their main focus, definitely should be on keeping and holding on to key players like Wesley Sneijder and Samuel Eto’o, who has also been linked with a move away and was arguably Inter’s best and most influential player last season.
Keeping them both, will be key and important for Inter’s progress this season, as well as the players settling into new coach, Gian Piero Gasparini, new tactics and formation. If Inter can bring in a few more reinforcements, especially in defence, and adapt to Gasperini’s tactics as quickly as possible, then Inter will be strong challengers this season.

Juventus, as usual, have spent quite heavily this summer, especially on making loan deals official, e.g. Fabio Quagliarella, Alessandro Matri, Simone Pepe, Marco Motta, etc., and are still trying to tie up a deal for Alberto Aquilani. Juventus, though, have done well in bringing in excellent players in the form of Chilean international midfielder, Arturo Vidal, Italian international midfielder, Andrea Pirlo, Mirko Vucinic and Swiss international full back, Stefan Lichtsteiner, all bought from both Bayer Leverkusen, AC Milan, AS Roma and Lazio. They’re two excellent additions to Juve’s squad and I’m sure they’ll be very successful with Juventus.

Vidal is one of the most consistent, versatile and talented midfielders or holding midfielders around. Andrea Pirlo, is a player who suffered with fitness and injury problems last season, but still has a lot to offer and if he stays fit, will be an inspired signing. Mirko Vucinic is a talented player, who can also play on the wing, he’s skillful and also good on the air and has a strong character. Question marks remain over his consistency, but I still believe that he’s a good signing for Juventus. While Lichtstenier is a hardworking full-back, who’s reliable and consistent as well and gives his all for the team.Another good addition is Reto Ziegler, who is a full-back arriving from relegated Sampdoria and like Lichtsteiner, is hard-working, reliable, and consistent and gives his all for the team. Despite these excellent additions especially as it will benefit Juve’s defensive side of the game, a bit more needs to be done to make the team strong challengers for the title. They still need an attack minded playmaker, Alberto Aquilani is their main target in that position, but with Juve unwilling to pay up for his services, they need to look for other options.

There are encouraging reports that Juventus are on the verge of signing Hamburg’s left wigner, Eljero Elia, who would be a great addition to Juventus’s squad as they’ll now have two explosive wingers to rely on (Elia and Milos Krasic). Juventus are also starting the new season with a new, young coach in Antonio Conte and with the excellent signings the club has brought in so far, things are looking positive for next season.

Roma are a club under new ownership and with a new look this season. They have a new young coach in Barcelona legend, Luis Enrique and have made some shrewd, young buys this season in Erik Lamela and Bojan Krkic, who both arrive from River Plate and Barcelona respectively. They both have the talent and ability to be great signings for the club.

Their best signing, however, has to be Maarten Stekelenburg, who’s a proven, world-class keeper and a definite upgrade over Cristiano Doni and Julio Sergio (who both have left to Liverpool and Lecce, respectively). Despite this excellent signing, I believe that Roma must buy re-inforcements for their defence, especially after the loss of Phillipe Mexes to Roma and the poor form of both Juan and Nicolas Burdisso. They’ve signed a new full back in Jose Angel, from Espanyol, who is

A player that is available and who I consider one of the best and most under-rated defenders in the league, who would be a very good signing for the club is Catania’s Matias Silvestre. Roma need to also focus on re-inforcing the right full-back position, which is being held by the ageing Marco Cassetti, who was woeful last season.

The loss of star player, Mirko Vucinic, might be a blow to their title aspirations, but if Lamela and Bojan settle quickly, then the loss of Vucinic will not affect the team.

Napoli were the surprise of last season, going all the way and ending up in third place behind champions AC Milan and Inter. They have an impressive three-way partnership in Edison Cavani, who was one of the sensations of last season scoring 26 goals in 35 Serie A appearances, Ezequiel Lavezzi who was one of the biggest assist-makers last season with 14 and of course, Marek Hamsik, who’s one of the best young midfielders in all of Europe. They also have two of the most-hardworking and underrated players in Serie A, in full back/winger Christian Maggio and central midfielder, Walter Gargano.

Napoli have improved this summer with the acquisition of Gokhan Inler from Udinese, who’s their biggest acquisition so far and will definitely improve the side with his tenacity, excellent passing, tackling and as well as his good right foot. We also must not forget, their powerful Colombian full-back, Juan Zuniga, whom I highly rate.

Napoli have also brought in Miguel Britos from Bologna and Marcos Santana from Fiorentina, to add depth to an already excellent squad. In my opinion, though, the defence needs to be reinforced. Their captain, Paulo Cannavaro, isn’t the best of defenders and has looked shaky at times with Napoli. Hugo Campagnaro is a good defender, but not a defender that can help win a team trophies, and the same applies to Salvatore Aronica.

If they improve their defence and maybe even bringing in a quality goalkeeper, I expect them to make a very serious challenge for the title.

Lazio started last season by storm and topped the table for several weeks, before they began to stutter and lose crucial points and ended in fifth last season, after a strong challenge for a Champions League place with Udinese. The club has lost two key players in Uruguayan goalkeeper, Fernando Muslera, to Galatasaray and full-back, Stefan Lichtsteiner, to Juventus. Despite that, Lazio have signed Federico Marchetti, as a replacement for Muslera from Cagliari, Aboulay Konko, as a replacement for Lichtsteiner, from Genoa, Lorik Cana, a tough and reliable holding midfielder from Galatasaray and two strikers, Djibril Cisse and Miroslav Klose, from Panathinaikos and Bayern Munich respectively, who if they can settle in to their new surroundings, can be very successful signings and can provide the club with plenty of goals this season.

Lazio, in my opinion, have done all right this summer, they might have lost two key players but they brought some reinforcements and good additions to improve the squad. I believe they can try to improve their central defence and buy someone with a bit more quality. They have acquired Marius Stankevicius from Sampdoria, but he’s more of a squad player and not a player that can help a team seriously challenge for the title.

I have high hopes for their talented defender, Modibo Diakite, to continue to improve as he huge potential to become a top player for the club. Lazio can challenge for the title, especially if their new signings settle in quickly and if they can bring in a quality defender and keep star players like Mauro Zarate, Cristian Ledesma, Hernanes, etc.

One thought on “Serie A Preview: Favourites and Contenders”