Well, at long last Tottenham finally broke the top four mold last season. They overcame Manchester City’s new found riches and Liverpool’s top four ambitions to win the coveted fourth place in the Premier League and earn themselves a golden ticket into the holy grail that is Champions League football. They were always there or thereabouts over the last few years, but a fantastic 2009/10 season delivered it in sublime fashion. They had come close before – a bad spaghetti bologneise, in fact, on the final day of the season in 2007 denied them the opportunity. There was no such luck last May however, and a 1-0 victory over City in their penultimate game of the season confirmed a top four finish.

Tottenham have one of the strongest squads in the Premier League, a good outcome of Redknapp’s wheeling and dealing over the last couple of seasons since returning to White Hart Lane from Portsmouth. At centre back, for example, they have four international players. Ledley King and Jonathon Woodgate – had it not been for injuries to both it would have been a partnership to behold. Along with Michael Dawson, another English defender who was phenomenal last season, and Sebastien Bassong, a superb centre back who cost no less than £10million. All fit and hungry, no side could ask for better options in that position.

But it’s also existing players who have thrived under Redknapp. At the end of the season fans and pundits alike were singing the praises of Gareth Bale, once an unfortunate jinx to the side, but now a certain starter at left midfield where he has been nothing short of phenomenal. Heurelho Gomes was the butt of everyone’s goalkeeping jokes in his first season at the Lane – now he’s a consistent and reliable performer, while Tom Huddlestone is a regular in the midfield and his fine season was rewarded with a place in Fabio Capello’s provisional England squad ahead of the World Cup.

Tottenham’s fantastic strength in depth was a major factor in their top four finish. When teams around them were missing players (Liverpool and Fernando Torres for example), Spurs had countless options from the bench to choose from when needed. Redknapp might have given himself headaches while deciphering who out of Niko Kranjcar, David Bentley and Luka Modric should he start – while Rafa Benitez’s biggest question came in how David Ngog will fare up front while Torres was on the treatment table. Even take a look at players not at the club; Robbie Keane, Kevin Prince-Boateng, Jamie O’ Hara and Giovani Dos Santos all spent time away from Spurs last season outlining the extent of their squad.

Very little has changed in the squad this summer  – which is unusual when you pair Harry Redknapp and Tottenham Hotspur together, both are notorious for their incessant buying and selling.

One man that has joined the club this summer is Brazilian youngster Sandro, from Internacional. A big uncompromising defensive midfielder, and he will add to Wilson Palacios and Tom Huddlestone who can also play the position to great effect. Sandro’s move will probably spell the end for Jermaine Jenas at the club, who has been linked with a move away for some time. Sandro will join up with the squad in mid-August after the Copa Libertadores, but will feature little in the side over the course of the season as he gels into the new surroundings in his new country.

Regarding players who have left the club, none will any effect on the senior squad, but expect some in’s and out’s before August 31st, as Jermaine Jenas, Robbie Keane and perhaps David Bentley could find themselves leaving the club. Spurs have been linked with a lot of players – some include Joe Cole, Edinson Cavani, Simon Kjaer and Craig Bellamy – so with Redknapp’s track record, expect a couple of new signings before the transfer window bangs shut. 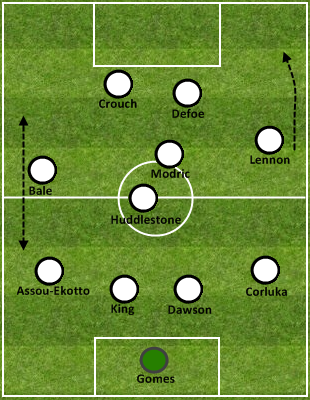 Tactics: Tottenham’s tactics tend to rely heavily on 4-4-2, however the personnel of the side may alter when playing home or away. With talent like Aaron Lennon and Gareth Bale on each side, much of Spurs attacks thrive on the wings with their pace and directness. When playing away, Bale may revert to left back to provide a little more security while Wilson Palacios comes into the midfield as extra protection for the defence, putting Modric on the left. However with his big squad, Harry has many options to alter the dynamics of the side – for example playing Niko Kranjcar on the right in expense for pace, playing a deep-lying forward in Eidur Gudjohnsen or replacing Crouch with Pavlyuchenko.

Key Player: You could take your pick from the back line (Dawson and King), the midfield (Modric, Huddlestone and Lennon) and up front (Defoe) – but Tottenham’s pride and joy comes in the form of Luka Modric, the Croatian playmaker they’ve rated at around £25million. Modric’s season last year was blighted with a leg break early into the campaign, but he returned later on and dazzled us with some good performances, but has yet to reach his maximum potential in the white shirt. Now playing in the Champions League, expect a big season from the creative playmaker.

Fixtures: Tottenham begin their season against old friends Manchester City at White Hart Lane, in what could provide an early edge in the race for the top four. It’s then onto Stoke at the Britannia Stadium before playing Wigan at home, West Brom at the Hawthorns and Wolves at the Lane. Spurs should be aiming for at least twelve points from their opening five games.

Where will they finish? Many will be optimistic that Spurs can regain a top four finish this season, but with City continuing to strengthen with some big money signings and Liverpool finally achieving some stability under Roy Hodgson, and hoping to keep their big names, it’ll be a big task to emulate last season. With a very strong squad, they’ll come close again but just miss out on a top four spot. 5th