A somewhat tumultuous 2012-13 saw Manchester City end the season with only the Community Shield to show for it. Their defence of the Premier League title they won in 2011-12 proved to be nothing more than a damp squib, whilst their European exploits proved nothing short of an embarrassment, dumped out of the Champions League at the group stage without even a place in the Europa League as comfort. A run to the FA Cup final, featuring a semi-final win over Chelsea, provided some relief, until they were shocked in the final by a late Ben Watson goal and lost to Wigan.

All in all, a number of City players didn’t have their most consistent seasons and weren’t at their best, whilst then-manager Roberto Mancini was all too often found wanting with his side somewhat one-paced and one-dimensional; a late season win at Old Trafford, full of skill and determination, hinted at what could have been.

Off-field factors also played their part in City’s failings: Mancini and seemingly the majority of his squad were increasingly at loggerheads as the season progressed, whilst the club’s transfer dealings last summer hardly helped, Mancini seemingly denied his main transfer targets and handed the unconvincing quartet of Maicon, Scott Sinclair, Javi Garcia and Jack Rodwell as recompense.

This summer has seen a renewed sense of optimism sweep around the Etihad Stadium, some £90million having been spent to improve not merely the squad but the first XI, as they look to reclaim their Premier League crown. Under the watchful eye of new manager Manuel Pellegrini, the Blues have appeared far happier, more relaxed and are seemingly enjoying their football more during pre-season than they were six months ago, whilst the club appears a more harmonious place from top to bottom. 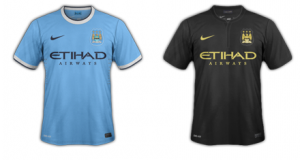 Wily Chilean coach Manuel Pellegrini is the new man at the helm, having joined from Malaga in the summer. Whilst trophies in Europe have thus far eluded him, his work has been nothing short of outstanding: He led provinical Villarreal to the Champions League semi-final in 2006, aswell as a second place finish in La Liga in 2008, took Real Madrid to a then-club record points total in 2009-10 and dragged penniless Malaga to last season’s Champions League quarter-final. Known for producing technically adept teams who play aesthetically pleasing football, he’ll be looking to win whilst offering more attractive football than that which Roberto Mancini delivered last season. Additionally, expect City to be far more flexible tactically, thanks to their new manager and new signings.

Over £90million has been spent on four players to add greater quality and variety to City’s first team squad: Dynamic Brazilian Fernandinho arrives after a trophy-laden spell in Ukrainian football with Shakhtar Donetsk and will partner Yaya Toure in central midfield; Spanish international duo Jesus Navas and Alvaro Negredo have both been recruited from Sevilla – Navas offers pace and width, both of which were all too missing last season, whilst Negredo offers the attack a powerful focal point; Stevan Jovetic, the highly-rated Montenegrin forward has joined from Fiorentina, his technical quality and intelligence marking him firmly as one to watch.

A number of highly-paid fringe players such as Kolo Toure, Maicon and Wayne Bridge have departed, along with Carlos Tevez, a talismanic yet ultimately disruptive figure. A number of players who flattered to deceive last season – Dzeko, Silva, Nasri and Richards to name but four – will be expected to return to their best form.

For the most part last season City went with something approaching a 4-2-2-2 formation, a variant on a 4-4-2 with wide midfielders coming in-field and freeing up space on the overlap for advancing full-backs. Whilst similar will be expected in the new campaign, don’t expect City to be so narrow/determined to play through the middle when they reach the final third; in that respect the arrival of direct right-winger Jesus Navas is vital.

Joe Hart remains first-choice in goal, whilst three of the back four are certain picks in the shape of Zabaleta, Kompany and Nastasic. At left-back Gael Clichy and Aleksander Kolarov will likely rotate depending on the opposition.

Much of City’s success this season will depend on how midfielders Yaya Toure and Fernandinho co-exist. Both are dynamic, powerful players with no shortage of technical ability and the ability to drive their side forwards, but will they compliment one another or are they too similar to co-exist, ala Gerrard and Lampard? Spanish schemer David Silva is likely to start from the left with license to wander across the field, in a similar fashion to his compatriot Isco, who Pellegrini nurtured so carefully and with great success during his two years at Malaga. Jesus Navas arrival offers a speedy direct attacking outlet who will offer City width in the final third and a wonderful crossing ability.

Up front, City now have a striking quartet which will garner envious glances from across Europe. Edin Dzeko has found confidence and form during pre-season, and the quicksilver Sergio Aguero remains his likely partner as the season kicks off. Stevan Jovetic is a versatile performer capable of playing in a number of roles both centrally or out wide, whilst Negredo is a powerful No.9 whose hold-up play could prove invaluable over the course of the season.

Belgian international centre-half Vincent Kompany is the leader in the City dressing room his stature at the club was cemented during the run-in to their title success in 2011-12.

Whilst not at his imperious best last season – injury troubles played their part – Kompany was still a commanding presence and more than played his part as City conceded just 34 goals in their 38 league games: A league best.

Aerially dominant, quick across the ground, technically strong and an intelligent reader of the game, Kompany is the Premier League’s outstanding centre-back. If he’s at his best throughout 2013-14, then he may well be lifting silverware once again next May.

Edin Dzeko has been told by the new manager that he’s first choice up front to start the season and he’s been in excellent form throughout pre-season. Sergio Aguero struggled with injuries last season, but still managed to net 12 goals in 22 Premier League starts, whilst Matija Nastasic had an outstanding campaign last year and should continue in a similar vein this season.

Manuel Pellegrini’s Premier League bow comes at home to Newcastle United in the first Monday night football of the season. A trip to newly-promoted Cardiff City comes next, before fellow Premier League newcomers visit the Etihad Stadium the following week, in the shape of Steve Bruce’s Hull City.

After the relative disappointment of (only) finishing second last season, with Manuel Pellegrini in charge of a stronger and re-motivated squad expect City to be there or thereabouts when the season reaches its conclusion. They’ll be closer than last year’s 11 point gap certainly.