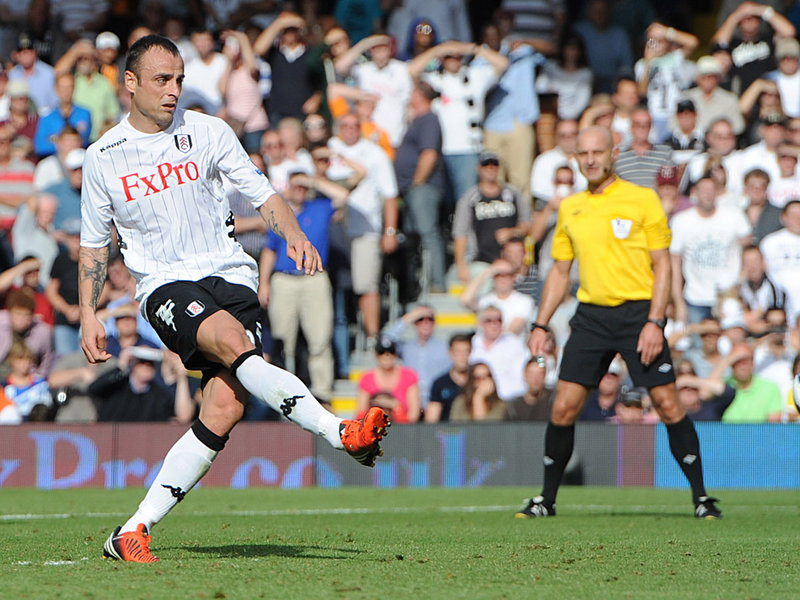 Fulham are far from a yo-yo club but in terms of changing fortunes they have had a pretty manic past few seasons. Three years ago in the 2009/10 they reached the Europa League final in an astonishing cup run that saw them knock out teams such as Juventus. Recently they haven’t been able to recreate that sparkle and last summer they lost talisman Clint Dempsey to Tottenham. He was joined in the exodus to White Hart Lane by the arguably even more influential Moussa Dembélé. The two were often the stand-out performers for Fulham and losing them was a big blow.

Martin Jol always has a trick up his sleeve though and he brought in Manchester United’s Dimitar Berbatov for a very cheap looking £5 million, a deal that most of the Premier League was envious of. Berbatov’s supreme talent shone at Craven Cottage last season and he enjoyed a very successful debut season. He has been ably supported in attack by Costa Rican Bryan Ruiz who, although inconsistent at times, has the talent to create pure magic.

Last season was a disappointing one for Fulham as they finished 12th and relative Premier League new boys Swansea, West Ham and Norwich all finished above them. For a while Fulham were arguably the strongest of the “mini Premier League”, the cluster of clubs just outside the top six or seven. Newcastle posed a threat but they seem to be faltering a bit and now West Brom and the aforementioned trio have picked up the gauntlet. Fulham will look to correct that this season.

Well the most important change has been the change of ownership at the club. Long-term owner Mohammed Al-Fayed has finally sold the club and as he has converted the club’s loans into equity they are now virtually debt free. This is a huge boost for Fulham as it will provide them with far more scope in the transfer market. The new man in charge is Shahid Khan who is the owner of NFL side Jacksonville Jaguars. Khan’s first intentions have looked promising and hopefully he can become one of the more successful American owners in the Premier League.

In terms of personnel changes Fulham looked to move fast and wrap up their business early. They released a number of first team players and picked up Fernando Amorebieta and Derek Boateng on free transfers from Athletic Bilbao and Dnipro respectively. Amorebieta is an accomplished centre-half with good ball skills and he should be a big boost to the Cottagers’ defence. I’m looking forward to seeing the Venezuelan play alongside captain Brede Hangeland. Boateng is a tough tackling midfielder who will compliment some of Fulham’s more technical midfielders. Although he has now turned 30 I believe he still has a lot to offer.

The two financial outlays have been making Sasha Riether’s loan from Cologne permanent and signing Maarten Stekenlenburg from Roma. Riether was one of Fulham’s best players last season and the £1.3 million fee paid is something of a bargain in my eyes. Stekenlenburg has been around for a long time now although he is still just 30 and in goalkeeping terms that is quite young. The man he replaces, Mark Schwarzer was 40 and clearly Jol felt the time was right to bring in a younger keeper. I’m sure Jol would have loved to keep Schwarzer at the club but obviously the Australian international wanted to challenge himself at his new club, Chelsea.

Last season Martin Jol often employed a 4-4-1-1 formation with Bryan Ruiz starting off Berbatov and I’d expect the same front two to continue this season. Stekenlenburg will take over from Schwarzer in goal and I’d expect the same back four as last season with Amorebieta playing with Hangeland at centre-back. Fulham clearly see Matthew Briggs as an eventual replacement for John Arne Riise but I reckon the Norwegian will continue this season.

I’m a big fan of Alex Kacaniklic and I’d like to see the Swede play more often on the left flank and I would presume that Ashkan Dejagah will play on the opposite flank. Kerim Frei is a very talented young winger and he is another promising player at Fulham. New boy Derek Boateng will be competition with Steve Sidwell amongst others for a starting spot. There is potential with Fulham to play an expansive 4-3-3 this season with Ruiz and Kacaniklic flanking Berbatov and an additional central midfield. Having said that I’m not entirely sure Jol would ever take this option.

Fulham have a couple of standout players in their squad but none more so than Dimitar Berbatov. The Bulgarian only cost £5 million from Manchester United and he scored 15 goals in the league last season. He has always had a tremendous touch and he hasn’t lost that over the years. His cool and composed persona in the penalty box also hasn’t changed. When he fires Fulham play well and they look a whole lot more dangerous.

Fulham’s other creative influence is Bryan Ruiz and the Costa Rican’s influence over games often goes a long way to determining the result. His left foot can be a deadly weapon at time and after two seasons adjusting to life in England he has to start producing consistent performances.

Club captain Brede Hangeland has been nothing short of a rock since he joined five and a half years ago. In the past he has been linked away to the likes of Arsenal and Liverpool but he has stayed loyal to Fulham each time. His towering height makes him favourite to win most aerial duels but despite his height he still surprisingly good with the ball at his feet.

Fulham have been handed a tricky opening five fixtures and they open the season away at Sunderland and that is possibly going to be a different prospect to last season. Paolo Di Canio has had the transfer window to improve his squad as he sees fit and he has added some top players. Arsenal are the first visitors to Craven Cottage and despite Fulham’s strength at home that will still be a hard game.

After that they are back up to the North-East to face Newcastle before they host West Brom at home. After that they have to go to Stamford Bridge for a derby against Chelsea. The games between these two have produced some crackers recently and a Jose Mourinho inspired Chelsea will be a big danger.

Fulham are one of those clubs that could realistically finish anywhere between 8th/9th or down in a relegation battle. If their key men stay fit and perform regularly I see no reason they couldn’t qualify for a European place. They will probably end up closer to 10th or 11th in a similar vein to last season.