Atlético Madrid winning La Liga last weekend has been great endorsement for the Spanish game. “Los Colchoneros” well deserved league title has provided a welcome respite desperately needed in Spain, breaking the long standing duopoly that Barça and Madrid have monotonously commanded at the top of the Spanish league table.

However, for anyone looking for the real fairy-tale story of Spanish football this season, it’s still currently being played-out in the Basque town of Eibar.

Situated in a valley off the main AP-8 motorway that connects major Basque cities, Bilbao and San Sebastián, the town of just 27.500 inhabitants (the smallest population for any catchment area with a professional football team in Spain’s top two divisions) has played host to SD Eibar since their formation in 1940. 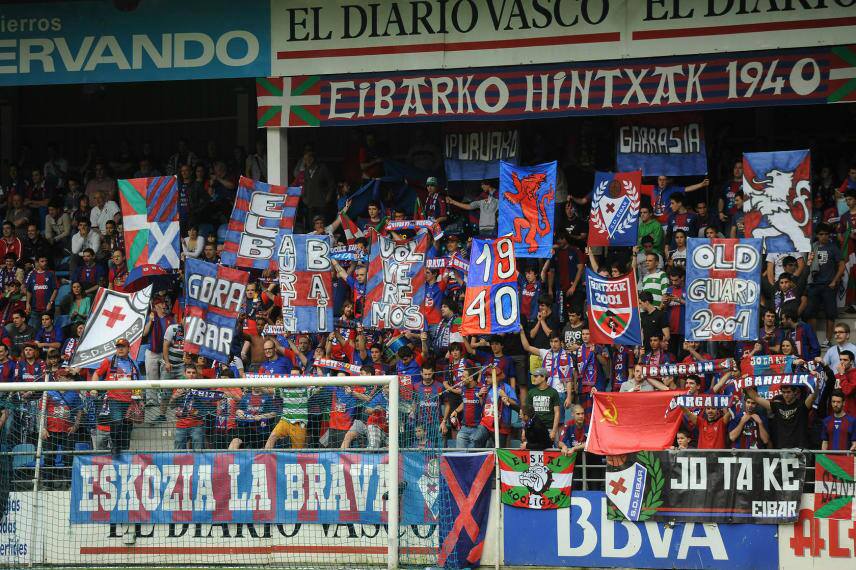 During their history the club has won no major titles or cups; their only dubious honour is being that of the team with the longest continuous run in Spain’s second tier, running 18 years from season 1988-99 through to 2005-06. They also developed a reputation as Spanish Cup “giant-killers” with their last scalp being local rivals Athletic Bilbao in 2012.

The club’s only other claim to fame is that of having World Cup winners Xabi Alonso and David Silva in their list of ex-Eibar players when they played for “Los Armeros” at their compact 5,250 capacity Ipurúa stadium at the beginning of the century.

The club returned to the Spanish second division this season but with the lowest budget in the league and were tipped as clear favourites to make a swift return to the depths of 2B again.

This incredibly hasn’t happened. With three games remaining in the league campaign they sit in second place, in an automatic promotion position to Spain’s top flight behind a Deportivo la Coruña side with a budget seven times that of Eibar’s.

What’s more, Eibar are one of those few teams in Spain who are financially sound. They have no debts, pay their players on time and have a solid economic model that even head of the Spanish league governing body (LFP) Javier Tebas has commented on positively.

Eibar hold a four point advantage on nearest rivals Las Palmas and have two home games remaining (against relegation threatened Alavés and mid-table Lugo) and an away trip to Numancia. Everything seems to be set for this fantastic “Cinderella” footballing story to have a happy ending and illustrate that, just occasionally footballing success can indeed be accomplished in an age when the economics of the game dictate that, achievement on the pitch is directly proportionate to investment and financial muscle off the pitch.

Sadly this where the fairytale ends. Eibar need to come up with €1.7 million by August 6th otherwise they face an administrative demotion back to 2B.

Eibar don’t have this kind of capital and face being punished for being financially sound when their rivals, whilst having bigger budgets the majority of these clubs also have bigger debts.

Faced with this situation and with the possibility of a historic promotion being taken away from them the club has responded with an engaging campaign: “Defiende Al Eibar” / Defend Eibar, designed to raise capital via a share option. Shares can be bought via the club at €50 per share, with certificates to be issued to shareholders in September 2014.

There is also talk of a commemorative plaque to feature the names of all new shareholders and new “Defenders of Eibar” at Ipurúa.

This week Eibar’s club president Alex Aranzabal, flanked by Xabi Alonso and Aiser Illaramendi amongst others, made a plea to the football world in Madrid to support the campaign. He also flatly rejected the proposal that the club could be sold to outside investment by capping shares. “We´d rather take the punishment and get demoted rather than share the soul of what SD Eibar is as a football club” he told journalists at a packed press conference.

Why do I care? Why am I taking the time to write this article?

I saw my team (Rayo Vallecano) play at Eibar back in the play-off final in 2006. Rayo lost and Eibar were promoted. The Eibar fans were magnanimous in victory and took time to commiserate with the travelling fans who made the trek north.

What did make an impact on me was how visibly clear the importance and role the football team played in this small town.
Every balcony was adorned with club colours, every shop, bar and cafe had posters wishing the team well. The football team and its fortunes visibly mattered to the people of Eibar.

Seeing a small but well run club like Eibar overachieve, make history and get promoted and then face the possibility of having that promotion unfairly removed should matter to all football fans!

Please do what you can.

SD Eibar shares can be bought via the club website.

2 thoughts on “SD Eibar, on the verge of promotion and demotion”