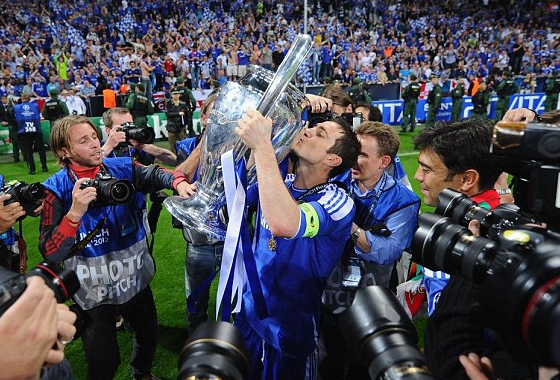 Two midfielders. Two doors. Through one, Paul Scholes slips out quietly. Meanwhile, Frank Lampard is pounding his fist on the other, desperate to be let inside.

Sir Alex Ferguson wasn’t the only Manchester United stalwart to announce his retirement last week, as Scholes also revealed he would be re-retiring at the end-of-the-season.

The timing was typical of a man who so happily avoids the limelight many of his peers crave.

There was never likely to be a farewell speech, although Ferguson made sure to single out the midfielder in his.

If his retirement has been somewhat overshadowed, then his career and achievements throughout it certainly should not be.

It would be easy to reel off all the titles he has won, with only Ryan Giggs a more decorated player from Fergie’s era, but the easiest way to get a sense of how big a player he was is to look at how those he played against revered him.

Xavi said of him:

In the last 15 to 20 years the best central midfielder that I have seen — the most complete — is Scholes.

Pep Guardiola labeled him “the best midfielder of his generation”; Edgar Davids stated: “I’m not the best; Scholes is”; Zinedine Zidane said he was his toughest opponent.

The biggest shame is how much is talents were wasted on the international stage.

Had he been Italian or Spanish, for example, a side would have been built around him. England played him on the left wing…

That brings us onto another headline-grabbing midfielder this weekend, and a man Scholes was moved to accommodate in the England team: Frank Lampard.

The 34-year-old scored twice on Chelsea’s win over Aston Villa, going level with – and then overtaking – Bobby Tambling’s record to go clear as Chelsea’s all-time leading goalscorer, with 203 goals.

For a striker, that’s an excellent return. For a midfielder, it’s quite astonishing. For ten years he has been the model of consistency, a double-figure season as much a certainty in life as death and taxes.

Even now, as he adapts to playing a slightly lesser-role in his advancing years, he has scored 17 goals: more than in either of the previous two seasons.

Just as remarkable as his scoring record is the fact that Chelsea have been so happy to let his contract run down.

If his form this season isn’t enough to convince the board, then perhaps they should take a look at Scholes.

While it’s understandable Chelsea want to look to the future, with the likes of Oscar, Eden Hazard and Juan Mata, the experience and knowledge of the club that someone like Lampard brings – without the off-field drama of, say, a certain captain – can be as invaluable off-the-pitch as his goals are on it.

Jose Mourinho’s likely arrival means a new contract will probably be just a formality, especially as the player has stated he wants to stay. And, indeed, after submitting this post, he has now been offered a new contract. Typical!

Paul Scholes has had the opportunity to depart his club not only as a legend, but on his own terms. Frank Lampard deserves the same.