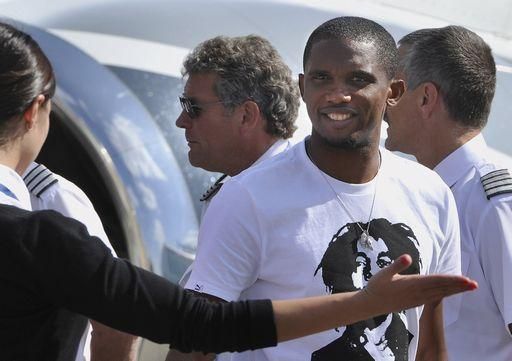 Despite Samuel Eto’o’s incredible achievements over the years, including winning three UEFA Champions Leagues, four league titles, an Olympic gold medal, two African Nations Cups and four African Player of the Year awards, he has often been overlooked for even more illustrious names – despite scoring a brilliant 251 goals in 470 games during his thirteen-year career.

Now, though, he has firmly left his mark on world football by becoming the world’s highest earning footballer, by a distance, but the likelihood is, sadly, that unlike when David Beckham touched down in Los Angeles in 2007, Eto’o will receive an even more cynical and hostile reception from both Russian and worldwide football fans.

At Real Madrid, Florentino Pérez and the Galácticos policy deemed Eto’o an ‘unmarketable talent’, just like with future gems such as Claude Makélelé and Esteban Cambiasso, and he was sold to RCD Mallorca in 2000. Having become Mallorca’s all-time domestic top scorer in just five seasons at the club, scoring 54 goals in 133 games, Eto’o was snapped up by Barcelona for €21 million in 2004. However, despite scoring crucial goals in his time at Barça, including Barcelona’s opening goals in the 2006 and 2009 Champions League finals, the seemingly more glamorous Deco, Ludovic Giuly, Ronaldinho, Thierry Henry and Lionel Messi took the plaudits for Barcelona’s success under Frank Rijkaard and Josep Guardiola.

The fact that Eto’o was the only player of the above mentioned to play a meaningful role, after Messi broke into Barça’s squad in 2006, in Barcelona’s whole resurgence from 2004-2009 makes this even harder to believe. The astonishing Zlatan Ibrahimovic transfer to Barcelona from Internazionale in the summer of 2009, where Eto’o and €46 million were exchanged for the Swede, saw Eto’o join Jose Mourinho’s hunt for the Champions League and was perhaps the best example of Eto’o’s new attitude: not kicking up a fuss upon leaving the Camp Nou and realising that it was time for a new challenge.

While not criticising a club upon leaving would be something expected of a professional footballer, throughout his career, Eto’o has been one of the most volatile characters in world football: at Mallorca, he violently threatened journalist Bartolome Terrassa and former agent Daniel Argibeaut; at Barcelona’s, he chanted “Madrid, cabrón, saluda al campeón” (Madrid, b*******, salute the champions) at Barça’s 2005 La Liga winning parade and controversially refused to come on in a match against Racing Santander in 2007; and with Cameroon, he headbutted reporter Philippe Bony in 2008.

However, at Inter, the new and mature 28 year old Eto’o was epitmoised in his willingness to move into the right-wing, having, on paper at least, always been the main figurehead at Barcelona. It allowed the prolific Diego Milito to thrive in Mourinho’s 4-3-3 formation and even though Eto’o netted ‘just’ 16 goals and seven assists in 43 games for Inter in 2009/2010, his newfound tactical nous and positioning played a huge role in Inter winning their first ever treble.

So, while Eto’o’s move to Anzhi Makhachkala, who were incidentally founded when Eto’o was just 10 years of age in 1991, has been met by overwhelming cynicism, due to his reported €385,000 weekly wage, Eto’o will begin the biggest challenge of his career – having proven himself at Europe’s top clubs. Anzhi, currently fourth in the Russian Premier League, having finished eleventh (out of sixteen teams) last season, have eight games to play to catch one of Dinamo Moscow (41 points), CSKA Moscow (46points) and Zenit St. Petersburg (46 points) to qualify for next season’s UEFA Champions League.

While Russia may seem like the perfect hybrid of a competitive paradise for a 30 year old striker, as opposed to the less competitive yet equally wealthy UAE or U.S.A, Eto’o will definitely meet a demon that has followed him throughout his career: racism. Racial prejudice is so prominent in Russia that ex-Zenit manager Dick Advocaat once remarked that he “could not sign a black player without the fans’ permission, which was unlikely to ever happen.” Advocaat’s response was provoked after Zenit’s 2008 UEFA Cup tie against Marseille, where Ronald Zubar, Charles Kaboré and André Ayew were all subject to racial abuse and on the same night, a Ghanaian student, Justice Adjei was stabbed 36 times by white supremacists in Petersburg city centre.

However, these were far from Petersburg-isolated incidents as former Lokomotiv Moscow defender Andre Bikey carried a gun with him in fear for his safety and Peter Odemwingie was subject to monkey chants from Lokomotiv’s fans, as well as a banner with a banana drawn on it reading ‘thank you West Brom’ when he left for WBA in August 2010. Eto’o’s teammate, Brazil legend Roberto Carlos, has also suffered horrific racial abuse since he moved to Russia in February.

The Brazilian has endured frequent monkey chants and in June, a banana was thrown at him away to Kryla Sovetov. Similar hostility will greet and trouble Eto’o who, in 2005 and 2006, nearly walked off the pitch in tears due to monkey chants away to Real Zaragoza and stopped bringing family members to away matches to prevent them being exposed to horrific abuse – which occurred in Italy too, when the referee nearly stopped a match against Cagliari in October 2010 after just three minutes due to racial abuse directed at Eto’o.

While it might be easy to brand Samuel Eto’o a mercenary, perhaps his move to Russia goes deeper. The Cameroonian, bravely, may see this as an opportunity to purge Russia of its incredibly vocal minority and give anti-racism a face known worldwide. Or maybe, Eto’o wants to be the main man and poster boy at Anzhi – an opportunity denied to him at Real Madrid, Barcelona and Internazionale.