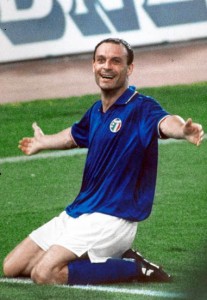 Say the name Salvatore “Toto” Schillaci around a table full of Irish people and you are sure to get a litany of anecdotes dating backto the start of the 90s, possibly a mention of Brendan O’Carroll’s character in “The Van”, his “F-$& SCHILLACI” t-shirt, and a melancholic air of “what if” that attached itself to the summer of 1990.

Truth be told, most people don’t know much about the man who broke Irish hearts and sent Jack Charlton’s men crashing out of Italia ’90 – Ireland’s maiden adventure into a World Cup finals tournament.

Salvatore Schillaci was born in 1964 in an area of Palermo, Italy that was controlled by the mafia. The area known as the “Centre for Poor Expansion” had no parks or football pitches for the young Schillaci to practice what he would do later on football’s largest stage. As cliché as it might sound, the poverty that Schillaci grew up in made his desire to make it to the top of World Football insatiable.

Schillaci made a name for himself with amateur side Amat Palermo before transferring to Messina in 1982. Salvatore Schillaci became a goal machine, fashioning goals from seemingly impossible chances. A goal-poacher with a lethal right foot.  One season in particular the young Italian netted a cool 75 times and scored 11 goals in one game.

Schillaci’s childhood was perhaps as harsh as his welcome into the Italian squad. He drove into his club Juventus’ training ground, where the Italians were stationed as pre-World Cup training commenced, and was met with rioting fans who were protesting that their club had just signed Roberto Baggio from rivals Fiorentina. The move, at the time, was considered the greatest defection of a club legend and fan favourite that had ever occurred within the sport and 51 people were injured in riots stemming from the transfer.

Italy, who are known for their unwavering dedication to defensive football and organisation at the back had Azeglio Vicini at the helm – a man steeped in the Italian way and had come through the Italian federation as a coach and former player. The catenaccio style that the Azzurri had invented needed a scrappy goal scorer to complement the likes of Roberto Baggio, Roberto Mancini and Gianluca Vialli in attack. Had Vicini opted for another defender or midfielder, it is common knowledge that Schillaci would have been the striker sacrificed. Unlike many teams who prefer to win games by clear margins, a 1-0 victory for the Italians with an early goal and ‘parking the bus ‘for the remainder of the game was nothing to be ashamed of. In fact, they prided themselves on these kind of performances and as it transpired, Schillaci would be the man they relied on to nab a goal before sitting back to defend the lead.

With 76 minutes gone in the opening group game against Austria, Schillaci made his way onto the field and scored a header to seal the victory for the host nation and send Italian fans into raptures. The most unlikely of heroes had made history and he would continue in this rich goal scoring vein throughout the tournament, despite being left on the bench for the next game against the USA.

Vicini finally gave into the public’s demand for the man from Palermo to start and he did not disappoint. He bagged his second goal of the tournament after just nine minutes of the final group game against Czechoslovakia. It was a game that the Italians would go on to win 2-0, leaving them with a perfect nine points heading into the last 16 match-up against Uruguay. Again, the little Sicilian bagged the first goal of the game after 65 minutes. He was slowly but surely becoming the player of the World Cup in the most unlikely of circumstances. Going from an after-thought to the main man of the host nation’s summer, Schillaci was on cloud nine.

Ireland, who had eeked their way through qualifying and had beaten Romania on penalties in the last 16 now stood in Schillaci and the Italian’s way. The only goal of the game, which came from Schillaci, has been the cause of many replays, much talk and unforgettable trauma for Irish people old enough to remember. What happened to Schillaci though?

For Irish fans, he came and went, like a ghost in the night, to torment and leave before he could see the damage he had inflicted. Ireland went home and Italy marched on.

Argentina would be the Italians next opponents and the South Americans would end up win on penalties after a 1-1 draw. Schillaci also scored in this game and went on to win the third place play-off against England. Schillaci netted a penalty to win the golden boot award and put himself into the category of Italian legend. He also beat off competition for the Golden Ball award in the form of Diego Maradonna and Lothar Matthaus. A feat that can not be underestimated.

Schillaci wound up battling injury in his return to club football and never reached the heights that made him a household name during that summer of 1990. The goals dried up and Schillaci was soon forgotten about after a transfer to Inter Milan in 1992. Although, he did become the first Italian to play in the Japanese J-League, after signing a lucrative contract in 1994. He would go on to score 56 goals in 78 games for Jubilo Iwata.

As for his legacy? Well, that depends in what country you ask that question. In Italy, Salvatore Schillaci will forever be associated with an adventurous summer that culminated in the semi-final of a World Cup. In Ireland, he will forever be remembered as the man who ended a dream campaign for Jack Charlton and Ireland’s heroes of Italia 90.

Schillaci, who had an Australian Group One thoroughbred horse and hundreds of pets named after him following his brief spell at the top, went into politics in his hometown, Palermo, and opened a soccer academy and while you won’t get too many household pets with the name “Toto” attached to them in Ireland, very few people will ever forget the name.

2 thoughts on “Salvatore Schillaci – The man we love to hate”