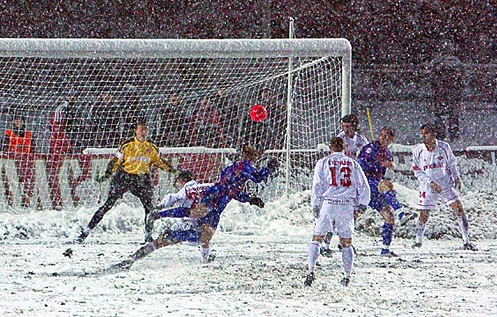 Since the historic move to the new season and the extra half a year tacked on to bring all into line, clubs have been complaining that the move from a Summer to Winter season has financially crippled them.  Upon admitting that they are at least six months behind in paying wages to players, former Premier side Sibir Novosibirsk (now in the FNL) blamed the extra six months to bring the calendar in line this year and a lack of care by the previous RFS (Russian FA) regime for the regions.

They’re not alone in financial crisis.  Fellow former Premier side Tom Tomsk (for whom fallen idol Gary O’Connor is plying his trade) are in end game status, while Metallurg-Kuzbass Novokusnetsk are in an even more precarious situation.  The players in Novosibirsk have given the club a deadline of October 25th to sort things out or there will be an all-out strike.

Tom’s players only got paid when they full-on threatened to boycott the Russian Cup match with CSKA Moscow, after which most were paid the backlog in wages.  Today (16/10/2012) General Director Yuri Stepanov quit stating that he cannot face a further battle to produce money where there is none.  The local government, who’d bailed out the club over the summer, have refused to do so again and with snow falling in the University city, so do hopes of survival.

Two more sides in the “Graveyard” are close to ruin (Khimki and Belgorod) though they have at least benefactors waiting in the wings.  It is not a surprise that the first three clubs mentioned are all stationed out in Siberia, where the snow has been falling for a week and the strain on keeping pitches playable and stands safe for spectators, or at least those who brave -15 temperatures, is draining limited resources. Of course leaving players and staff without pay for six months is a travesty, though the previous regimes connivance with shadowy agents and moneymen to prevent a proper Players Union from taking shape has stifled dissent.  Players are beginning to speak out and refuse to accept the status quo.

Tomsk, top of the table, are confident of turning things around, while Novosibirsk is one of the richest cities in Russia.  It is located in Western Siberia and a spot where foreign retailers get results only below that of Moscow and St. Petersburg.  That the football club should be in financial trouble seems out of step, though as many colleagues and friends continually remind me – “This is Russia”.  Former USSR, Russia and Milwall striker Sergei Yuran yesterday (15/10/2012) come out against players for complaining about unpaid wages, which is interesting as his own wages have been paid in full without difficulty.  Yuran claims that modern players are too concerned with monetary gain and in a shot at the club administration, he claimed that his football club had “no professionals” running it.  There has been no official club reaction to his outburst as of yet.

Novokuznetsk have only Khimki below them in the table and ironically grew (400 years ago) out of Tomsk as a settlement.  The club delighted in joining the FNL and while they didn’t overextend on players, the cumulative travel costs and expenses related to player bonuses has the club under a dark cloud.  That dark cloud is always there with the massive deposits of coal beneath the region, though now a certain depression is filling the hearts of football followers in the region.  And yet there is money there to live the dream, though it’s not into football clubs money is being put.

Siberia is ice hockey country and second to this is rugby (in certain regions).  With the current player difficulties in the NHL professionals are flocking to Russia to nab short term contracts with KHL (Kontinental Hockey League) clubs who are matching what is on offer in North America.  Local clubs play to packed out and vibrant arenas, especially so in Siberia.  Novosibirsk’s “Sibir” Hockey club and Novokuznetsk’s Metallurg will get full houses (c. 8,000) for home games and can afford salaries far above what the football clubs can pay so that kids grow up wanting to make it in ice hockey rather than football.  The annual catastrophes surrounding football, the dripping taps of bad news and the lack of forethought by football clubs, has left the game dying on it’s knees in Siberia.

Whilst it’s very simple to look upon football in the FNL and Siberia as a cause for concern, countrywide the game is struggling to get supporters through turnstiles and viewers on television.  Russia picked up a solid win over Portugal with Igor Akinfeev rightly taking plaudits for his efforts, though the next generation of young footballers coming through have worried Fabio Cappello sufficiently so that he has requested the RFS put a proper action plan in place to renew facilities and coach education across the country.  In Russia the number increases yearly of citizens with “Master of Sports” after their name.  These are supposed to be people who have taken at least 4-5 years of study in sports education so that they can go off to become sports coaches or administrators of the highest level.  However it is all a sham and a soul crushing one at that.  In Moscow (for example) it is possible to buy a “legitimate” degree in the metro, advertisements abound of quick diplomas and certificates so that you can get the job of your dreams.

This may well explain banking blunders and why roads are planned to be built across impassable swamps, or even why government officials seem to be unable to speak in anything other than monosyllables.  Though sport is where the most blatant and clear cases of such cheating and lack of transparency come to light.  To gain a Master of Sports you need to pay your fees, hand in bi-annual papers and annually sit an exam, for which you have been supplied with the answers – in advance of course.  You get dispensation for non-attendance at classes as you are a) wealthy and have paid off the right person to mark you as present, b) are a professional sportsperson and have to train or c) you simply turn up at least twice a year and pay for your results.  There is now a generation of sports coaches who have little clue as to how sports can actually be coached or athletes developed, or how clubs can be run, outside of their own instinct and experience.  The old generation of coaches or administrators have refused to take on board many of the improvements in their disciplines so that the performance of athletes and clubs are declining year on year.  If you want to see the next Russian tennis star, don’t look local, look at where their parents have taken to for proper coaching and development, even if it means missing out on the patronage of the Kremlin.

With lack of quality coaching for the players and appalling administration at too many clubs, the game is not taking advantage of the great window of opportunity given to it by the general rise in income and interest in football.  Instead clubs continue to look upon supporters as cattle who will moo when told and need little more than a few stiff ones before coming out to the game.  RFS President Tolstykh has vowed to change this from top down, now it’s up to the clubs to work form bottom up.  It won’t be just the winter freeze that they’ll feel, but the icy hand of regional governments closing the casket.