It’s not often said that the sights and sounds of Tallaght are comparable to those of India.

Sure, The Square shopping centre can be billed as an architectural masterpiece to match that of the Taj Mahal but other than that the two don’t have very much in common.

In any case, Pat Fenlon and his Shamrock Rovers squad will be happy with their home comforts after a pre-season trip to the world’s seventh-largest country. It was an experience all the players enjoyed, as Fenlon told Back Page football earlier in the week. 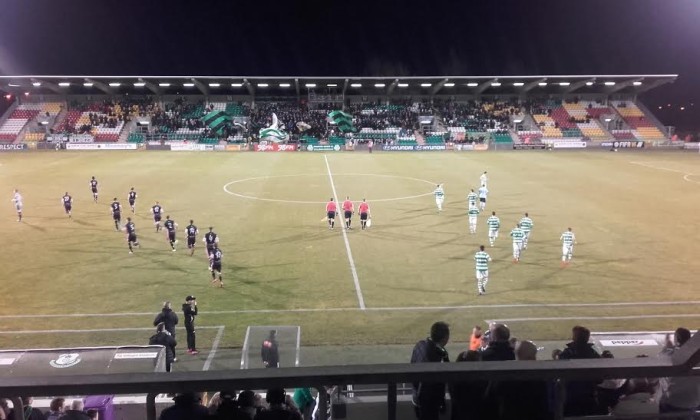 However, on Friday night it proved to be a case of ‘there’s no place like home’ as League of Ireland football rolled back into the south Dublin suburb and Rovers made it two wins from two at the start of the 2016 Premier Division.

A goal from Danny North and a Gary McCabe penalty secured a 2-0 victory over Wexford Youths, an identical scoreline by which Fenlon’s men won away at Sligo Rovers last week.

The newly-promoted Youths traveled to Tallaght Stadium with many observers predicting a straightforward victory for the home side. That wasn’t the case in the early exchanges as the away side looked more than capable of standing up to the little Rovers had to throw at them.

In the opening minute, North was brought down on the edge of the box but Brandon Miele’s resulting free-kick was headed behind for a corner.

Following that, apart from a couple of half-chances for either side, the first half hour passed without much incident.

In the 31st minute Killian Brennan played a ball over the top which was a touch too far for the run of Miele and Wexford goalkeeper Graham Doyle was on hand to clear up the danger.

The lively Brennan delivered a ball to North on 38 minutes but the former Sligo Rovers man headed just onto the roof of the net. This brought an audible gasp from the crowd but the assistant referee had raised his flag for offside so it wouldn’t have counted had it gone in.

Wexford’s Paul Murphy, impressive otherwise, was too slow to release the ball to Aidan Friel just before half-time and the teams went in at the break with the score deadlocked at 0-0.

A largely flat atmosphere around Tallaght Stadium during the first half was reflective of the lack of entertainment on the pitch. Perhaps some winter cobwebs remained for the fans as well as the players?

The crowd found their voice however, as the second half started brightly. Wexford’s small band of travelling support were mostly drowned out by the singing and chanting of the home fans.

The away supporters almost had a reason to celebrate on 47 minutes as Gary Delaney tested Hoops’ goalkeeper Barry Murphy from close range.

A snapshot from Rovers’ Michael Drennan was unsuccessful on 50 minutes as the crowd sensed a goal. Their senses proved accurate ten minutes later as another Miele free-kick was knocked onto the underside of the bar by Doyle before North fired home from close range.

It was no more than Rovers deserved but Wexford weren’t going to give up easily. Paul Murphy hit a long-range effort on 75 minutes but his namesake in the Rovers goal was largely untroubled.

Youths manager Shane Keegan rolled the dice with a triple substitution on 79 minutes before Rovers’ Killian Brennan limped off a minute later to be replaced by Patrick Cregg. Brennan is now doubtful for the visit to Finn Harps on Monday.

84 minutes had passed when Drennan and Miele exchanged a delectable one-two before the latter overhit a pass to substitute Gary Shaw who had previously replaced goalscorer North.

It looked like the game was going to peter out to a 1-0 victory for the home side until referee Ben Connolly pointed to the penalty spot for a foul on Rovers captain McCabe by the visitors’ Lee Grace.

McCabe dusted himself off to put the finishing touches on a second successive 2-0 victory for the Hoops.

Shamrock Rovers can reflect on an opening home win from third position in the league behind Galway United and champions Dundalk on goal difference.

Four goals and two clean sheets can be seen as a solid return for a side hoping to retain the title they last won in 2011. As goalscorer Danny North explained afterwards:

Rovers manager Pat Fenlon was complimentary of his opposition as he stated:

We didn’t expect any different to be honest, they were a little bit unlucky last week and were unlucky tonight as well. We expected that, their shape was good and they frustrated us a bit in the first half.

We said to the players at half-time be patient, it’ll open up a little bit and it did in the second half.

So there you have it. The jetsetters of the League of Ireland back at Tallaght after their pre-season adventures. It may not be India but it’s home.