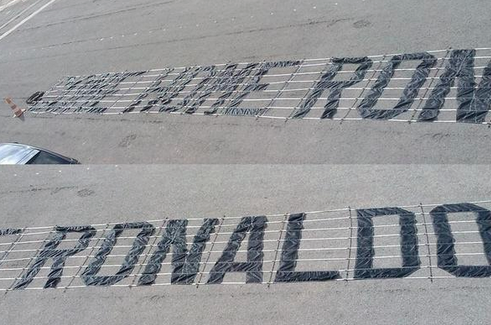 This Saturday, if reports are to believed, at some point during Real Madrid’s league fixture against Villarreal a light aircraft will fly over the Estadio El Madrigal towing in its wake a banner displaying the phrase ‘Come Home Ronaldo’.

The apparent aim of this extravagant action is seemingly to force the former Manchester United forward to become misty-eyed about his ‘spiritual home’ and start in motion a series of events that will result in the bronzed goal machine back wearing the famous red jersey.

This isn’t the first time that the air above a football stadium has been used a staging ground for a football related protest, however the forthcoming display will perhaps rank as the strangest so far. The founder of the group that has reportedly paid out £3,000 for the endeavour has stood by the group’s actions, in the face of a healthy dose of ridicule:

We have active supporters on every continent of the world and we are all united by our love for Cristiano both as a football player and as a person. We won’t stop until we bring Ronaldo home.

While most Manchester United fans have distanced themselves from the actions of a few misguided individuals, there is something to be said for the increasing chatter and excitement over CR7’s potential return to Manchester United, a story that has been bubbling up increasingly since the World Cup concluded.

But is even considering the return of the Portuguese forward a good idea? To put it bluntly – no. In fact, the ongoing conversation is masking the real issues that Manchester United are currently suffering from.

Manchester United’s decline – which culminated in last season’s limp 7th place finish – has been the result of a series of bad decisions at management level, coloured by the nefarious financial mismanagement at board level ever since the Glazier family bought the club.

Whilst David Moyes certainly sped up the rate of decline during his disastrous spell, this decline was conceived during Sir Alex Ferguson’s reign. A series of poor transfer decisions – signing players despite the absence of thorough scouting and more significantly not replenishing positions that, quite naturally, declined in performance over time.

Those series of mistakes all lead us to this point – A Manchester United not just toppled of its perch, but having that perch dismantled. Yet the only way to stop the rot is to break the cycle of panic buying and knee-jerk reactions.

Re-signing Ronaldo would represent another example of poor decision-making and would ultimately do more harm than good in the long run. Even considering the notion belies a failure to grasp even the basic notion of how to rebuild something that has fallen so far into disrepair.

Much analysis has focused on the lack of ‘fear factor’ evident when teams, particularly those seen as small fry, play Manchester United – teams are not only willing to attack the 12/13 league champions, but are succeeding with a regularity that would have been unheard of during the Manchester United’s most successful periods.

The case in point was illustrated last weekend at the King Power Stadium, where the home side – newly promoted Leicester – were 3-1 behind to the visitors, yet were willing and able to not only work their way back into the fixture, but to then go on and win it – scoring five goals in the process.

And the crux of Manchester United’s decline has been hung on that inescapable fact – they are conceding too many goals. In Ronaldo’s last season playing for Manchester United his team conceded 24 league goals, the season after 28, and then 27, 33 and finally 43 in the past two seasons respectively. If the form of this season continues at the same rate Manchester United will be in line to comfortably concede more than 43 goals this season, in fact the number will more than likely be close to 60.

Obvious as it is to point out that Manchester United’s problems lie within the defence and, to some extent, the defensive aspects of central midfield, the problems have been patently there for a while – pre-existing this season, or David Moyes’ ill-fated tenure. These problems were masked less by Manchester United’s own volition, and more by the mistakes and poor performances of title rivals.

A real, tangible ‘fear factor’ is built from the ground up, enforced by the deference of opponents that consider you unbeatable – a set of adjectives that clearly don’t exist when those currently facing Manchester United consider the fixture.

Aside from defensive considerations is the pertinent point that it is hard to see how Ronaldo would be accommodated into the current squad. Obviously a player of his calibre would demand a starting place, especially considering the financial outlay required in any such transfer. But then who do you leave out from the starting 11 – Juan Mata? Robin Van Persie? Radamel Falcao? Club captain Wayne Rooney? Or new signing Angel Di Maria?

It might be an easy, even alluring notion for both Manchester United and it’s fans to fantasise about – but from a practical, tactical and financial point of view the transfer of CR7 to Old Trafford should be way down an already lengthy list of priorities.