A footballing phenomenon hangs up his boots this week as Brazilian legend Ronaldo calls time on a sensational career. In the third of a 5 part series to be played out over the course of this week, Kevyn Doran takes a trip down memory lane and looks at the special moments that defined a superstar. How do I do this moment justice? How do I put into words the impact that this moment had on me? To this day, it still remains the only time anything related to football has ever reduced me to tears. This day in March 2009 is not important to me simply because I’ve devoted much of life to following a player who has not just entertained, but has genuinely made me smile while watching him. It’s not important on any grand scale of significance beyond the matter of footballing rivalry. No, the importance of this moment is more primitive – more human – than anything a mere 3 points could account for. This didn’t just tug at the heart strings, it vehemently wrenched them from side to side, allowing to spill free an overflow of empathy, affinity, warmth and compassion that can only manifest itself in the form of tears. This moment was the purest form of ecstasy – a rush of human emotion far more transcendent than anything man could produce. However, it was a pleasure one could only be indebted to having experienced the cataclysmic depths of anguish and despair.

To understand the euphoria, we must first go back to 12th April 2000 and the first leg of the Coppa Italia final between Inter and Lazio. Ronaldo’s season had thus far been one of frustration. Personal clashes with Inter manager Marcello Lippi were frequent, and he had suffered a serious injury in November 1999 in a league tie versus Lecce, straining the patella tendon in his right knee. This was not a complete shock to Ronaldo – he had suffered from Osgood-Schattler disease as an adolescent, and he attempted to have this rectified whilst at PSV Eindhoven in 1995. The operation focused on that same patella tendon, and the aim was to relieve the tendon of the strain caused by the quadriceps muscle – a strain that was vigorously heavier in someone as athletic and powerful as Ronaldo. The operation was a success, but the tendon would never be 100% again – as evident in that game versus Lecce 4 years later. It was an injury that ruled Ronaldo out of action for 5 months, with his comeback penciled in against Lazio in the cup final. 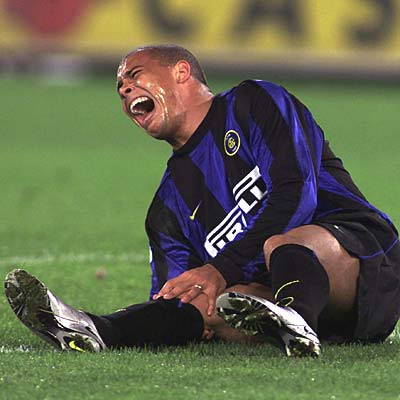 He started the game on the bench, but would be introduced at half time by Lippi in an attempt to open up what was proving to be an edgy affair between two rivals. Forwards were not seeing much of the ball, so they were resorting to dropping deep to see possession. It was on 64 minutes, and one of these forays towards the midfield battleground, that the career of a superstar would change forever. Facing Lazio’s imperious Portuguese centre-back Fernando Couto, Ronaldo attempted to misdirect his opponent, feinting right before taking the ball left. However, when he planted his right leg as the catapult for the impending change of direction, there was a loud snap. Ronaldo fell to ground, clutching his knee as Couto immediately signaled for help. The injury was so severe, that Couto had heard the crack that would sever the same patella tendon Ronaldo had strained 5 months earlier. Medics rushed to attend as he lay on the ground, screaming in agony. “Mother! Father!” he yelled, his face awash with torture. “Why me!”

It would be 20 months before Ronaldo would set foot on the pitch again, and while he would taste domestic and international success with new club Real Madrid and Brazil respectively, his approach to the game had irreversibly changed. No longer was he the expeditious speed-demon who would pick the ball up 30 yards from goal and take on the entire opposition defence. No, Ronaldo had to completely remodel his game as his knee could no longer take the strain of the athleticism he had previously displayed. Now, he displayed an approach based on power, decisiveness and efficiency. No longer would he take the ball from midfield, but rather he would ensure he was there to receive the ball from the player who did. It was a process that took the most rigorous training and was grueling in it’s implementation, but Ronaldo succesfully rebounded from a serious career-threatening injury.

It was an experience one would not wish on their worst enemy, and certainly an experience one should have to endure twice. Sadly, Ronaldo would have to relive the misery eight years later in the twilight of his career. At 31 years of age, such an injury would mean almost certain retirement. Now plying his trade at the rosoneri of Milan, the circumstances would almost mirror those of years earlier. Having only been on the pitch for 3 minutse, Ronaldo jumped in an attempt to meet a high ball into the box. A loud snap would once again alert the attention of the surrounding players, and they immediately called for help as Ronaldo once more lay in the ground in despair. He cried out for help, all too aware of one crucial, devastating aspect that differed from his previous experience – this was his previously uninjured left knee. He had ruptured a kneecap ligament, an injury that more often than not claimed the careers of players of his age.

“I heard a horrible sound, like a bang, it was a strange sound” – Marco Amelia

With his contract expiring just months later, Ronaldo found himself in no man’s land. Seriously injured and unemployed, very few would persevere. But then again, very few have the will to succeed and love for the game quite like our protagonist. Having returned to his homeland with Corinthians, Ronaldo began 13 months of intense physiotherapy. Once again, he had to rebuild his career from the debris of a knee-shattering injury. On the 4th March 2009, he put the pain and suffering of the previous year behind him to come off the bench in Corinthians’ Copa do Brasil encounter with Itumbria. Although a significant and heart-warming moment, this was not the redemption that Ronaldo nor his fans valued, for he had never before in his career put much stock in being a bystander, and he was not about to start. Ronaldo dealt in goals – 420 over the course of his career to be precise – and his resurgence would not be validated until he once again wheeled away from goal, ball nestled in the bottom corner, with that trademark grin on his face.

The goal would come in typically theatrical fashion just 4 days later against fierce rivals Palmeiras. Trailing 1-0, Ronaldo would make his introduction in the second half just like he had done days earlier. However, this introduction did not have the same red-carpet celebrity as the previous, for this was not a done-and-dusted cup tie. The fans were restless – as much as they appreciated seeing the legendary Ronaldo in their colours, they wanted a goal from their superstar. The goal itself didn’t look like it was coming – the stadium erupted in premature jubilation as their hero crashed a long range shot off of the crossbar with minutes remaining – and Palmeiras looked like leaving with all 3 points. In the third minute of stoppage time, Corinthians won a corner. Youtube videos of the moment highlight the restlessness of the fans as their counterparts bounce on the opposite side of the stadium – losing to a rival is unacceptable.

Douglas’ looping corner evaded everyone, and Ronaldo was unmarked on the back post to nod the ball home. One could count the number of headed goals from a corner kick during his career on one hand – remarkable considering the sheer volume of goals to be considered. But this goal was special. The stadium exploded with joy – one would be forgiven for thinking Corinthians were the home team. Ronaldo sailed away from the pitch, vaulting the nearby advertisement hoarding, and raced straight for the away fans. A 10 foot high fence adorned with banners seperated players from fans, but no man made structure could ever contain this moment. Ronaldo scaled the fence, joined by his team mates, and shook the barrier with unrestrained jubilation. Fans poured forward – they also climbed the fence – desperate to share in this moment and get just a handful of their hero. The fence gave way as the players disembarked – police and reporters stormed the vicinity. This was no longer the celebration of a goal, this was the celebration of a career, the adulation of an icon. Tears streamed down Ronaldo’s face – his team mates embracing him in support and appreciation. Camera’s flashed in his face and the more daring reporters tried to draw a vocal response by holding microphones in his path. No time for talking, just take in the moment.

As Ronaldo made his way back to the pitch, he turned and looked at the fans. This is what the combined 48 months of painful physiotherapy was for. The celebrations, the jubilation, the unbridled ecstasy of thousands – all born from the excruciating pain and torture of one man. It was no longer a game of football – this was empathy between men. If this didn’t provoke a basic emotional response, then you weren’t human. Tears, dance, disbelief – it didn’t matter how you expressed it, because this was why we watch football. We often forget that this game is so rarely about three points. Beneath it all, goals are irrelevant and league positions provide little more than accessory to the basic, raw emotions that this beautiful game bring to the surface – and despite the 1500-odd words you have just read from me, I cannot even begin to tell you how much this moment meant. So just imagine what it meant to Ronaldo himself.

Ecstasy? Well yes, I suppose you have to start somewhere.