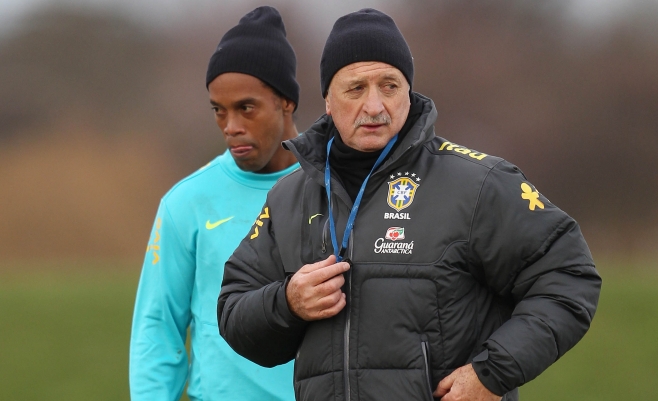 Rarely has an international combination been so mutually beneficial.

The 2002 World Cup made Luiz Felipe Scolari and Ronaldinho undoubted household names throughout the world, but they could not have achieved this without eachother.

For example, Ronaldinho, with that free-kick and his previous assist, was inspired in the 2-1 quarter-final victory over England despite his sending-off; but, equally, Scolari boldly recalled him for the final against Germany.

Without Ronaldinho and all joviality he embodied – amid the throng of the worryingly limited expectations of the Brazilian public and media, still upset over Romário’s omission – Scolari probably would not have had his footballing epitaph written after that seamless World Cup campaign.

Of course, over a decade later, Ronaldinho’s still-impressive achievements – on paper at least, having won the Bola de Oura after leading Atlético Mineiro to 2nd in Série A – carries more caveats than in 2002.

Then, he was the raw, leggy showboater who had never consistently impressed for PSG and did not appear ready to be, or even share, in the same limelight as Ronaldo and Rivaldo; now, his presence is unsettling and disruptive, ironically more for tactics than for his infamous escapades off the field.

Naturally, given his affinity with Ronaldinho – having come close to bringing him to Chelsea in 2008/2009 and with vice-president Sandro Rosell, influenced by Ronaldinho, headhunting Scolari to replace Frank Rijkaard at Barcelona in 2004 – Scolari was always going to call him up for Scolari’s first Brazil match in nearly eleven years.

However, despite Scolari’s infamous stubborn nature, lessons should have been learnt from Mano Menezes’ recent flirtation with El Gaucho.

In giving into media pressure, Menezes brought back Ronaldinho into the international fold, but despite Ronaldinho being used  to good effect in a deeper, static, quarter-back-like role against Mexico on 11 October, 2011, four months later, Ronaldinho desperately struggled with his passing and set-piece delivery against Bosnia and Herzegovina on 28 February, 2012.

For all the talk of the limits of the international game in comparison to top level European club football, even Ronaldinho and his fairly limited tactical requirements were being exposed against, theoretically, weaker opposition under Menezes.

Ironically, in fact, it was Ronaldinho’s decadence at Flamengo that eventually accentuated the emergence of the immensely-talented Oscar in the number ten position under Menezes – but, tellingly, Scolari banished Oscar, and Neymar, to the flanks against England on 6 February.

It left what should have been a fast-paced, spring-countering Brazil team – centered on the quick-wit of the likes of Ramires, Oscar and Neymar- fragmented, muddled and slowed down by a ponderous Ronaldinho.

Still, it should not have come as a surprise.

After all, much of the pre-match talk had been about the return of the circus of Ronaldinho and while it must be noted that he has only played one competitive game so far this year, worrying signs remained. 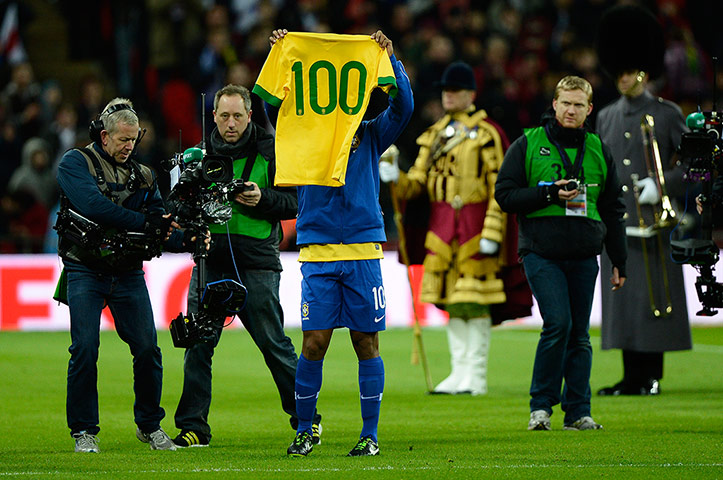 Presented with his ‘100’ (95 offically) caps shirt in front of a still-filling  Wembley, Ronaldinho’s infectious, Disney-like smile remained but the twinkle in his eye – that has not been evident since the tail-end of 2006 – has long departed.

Of course, though, a triumphant return on European soil was not meant to be and this was long-evident before Ronaldinho had the chance to put Brazil 1-0 up from the spot on 17’.

After all, Ronaldinho attempted numerous lofted through balls and shimmies and, willed on by the Wembley crowd, there was not a football fan that night that did not want to see Ronaldinho truly re-emerge ahead of the 2014 World Cup.

However, even the simple seemed beyond Ronaldinho that night, with the attacker, uncharacteristically, sending a simple two-yard pass out of play at one point.

Maybe Ronaldinho was feeling the pressure, but his decision to take the penalty ahead of Neymar suggested otherwise.

While Ronaldinho has always been armed with an off-putting, stuttered run-up, his ability to strike the ball into the top corner – despite this illusion of a low-hitting run-up – made him a brilliant penalty taker.

Unsurprisingly, though, Ronaldinho has cited Joe Hart’s ‘tactics’ – be it unfurling his tongue or waving – for deceiving him and his low-aimed hit, but even Ronaldinho’s brave determination to pounce on the rebound smacked of desperation.

That night, El Gaucho seemed to lack the control, presence and tempo to be a force in international football again and Scolari’s attempt to shoehorn him into a midfield trident with Ramires and Paulinho ultimately failed.

An anonymous performance was reflected in Scolari not even affording Ronaldinho the chance to make amends in the second-half, with the attacker not emerging from the dressing-room after being substituted for the more impressive, dynamic Lucas Moura.

Of course, though, Scolari has talked of Ronaldinho making the 2014 World Cup squad “comfortably” if he “continues working normally.”

However, banking on that with Ronaldinho is always a risk – with his past five seasons defined by bouts of four-month bursts of form, followed by a worrying unravelling interlude.

Desire, clearly, is still an issue and, perhaps, Scolari is not sending the right message as to really rile any sort of semblance of commitment and magic from Ronaldinho again, he will have to alter his tactics and approach.

After all, it is worth noting that when Ronaldinho was ‘needlessly’ hauled off on 88’ by Flamengo’s Vanderlei Luxemburgo against Botafogo on 19 June 2011 – for the sole purpose of giving Ronaldinho the brutal booing wake-up call that had evaded him in Europe – it led to a remarkable transformation.

In the international arena, Scolari can only really achieve this effect through his naming of squads but with an already lax camp – due to Brazil not playing any competitive matches since the 2011 Copa América – Scolari really needs to tread carefully regarding building team chemistry, philosophy and confidence.

Ultimately, regardless, any sort of Ronaldinho brilliance is going to be a short-term fix but, ironically, that is just what Scolari is for Brazil, too.

It is yet another mutual point that the pair can identify with and it is telling that out of the 2002 World Cup squad, Ronaldinho is the only player Scolari can, realistically, still justify calling on.

Perhaps, once Ronaldinho gains match fitness, continues to enjoy the command of the Atlético Mineiro dressing-room and nears his goal of having a global renaissance at the 2014 World Cup, one of the great international footballing partnerships of the 21st century will continue.