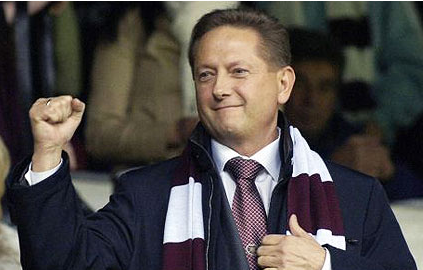 “What’s happening with the club today is not a new thing. For almost seven years we have been fighting to shield the club from crooks, criminals and thieves. Many of the top players at the club have felt the bitter results of the swindles that have been carried out with them on their own skin. Skacel and Webster have returned to the club after realising where these ‘football patriots’ have led them.

“Over a short space of time four players at our club have been on the wrong end of the law. We note that three of them are represented by the same agent – Gary Mackay – who has been so vicious in his attacks against Mr Romanov.

“Taking into account the facts that have been omitted by the media it can be presumed that each of these cases is not a coincidence, but the result of targeted actions of a Mafia that wants to manipulate the club and the results.

“Every year Hearts fights to be in the top three, but even last season in the last 12 games of the season it was almost like someone replaced the team with a different one.

Whose fault is that? Players? Manager’s? Or it is Mafia.

“Stealing players, bad games, problems with the law – all of that on top of record SFA fines. Problems are just shifted to another level.

“Mafia are dragging kids into the crime, in order to blackmail and profit on them. It is not possible to separate these people from paedophiles, and you don’t need to do that. Each year we are forced to fight against these maniacs harder and harder. We are standing in their way not letting them manipulate the game of football in the way they want. As such they undermine us in every possible way they can.

“The task of the club is to tear these kids out of hands of criminals.”

The above is an official statement taken from the Heart of Midlothian official website on Friday. It’s a work of art that rivals the faked moon landings and 9/11 in the conspiracy theory stakes. Although the statement was issued by the board of directors without doubt Hearts Lithuanian owner Vladimir Romanov’s fountain pen is still smoking after this fine piece of work.

If you are unfamiliar with Hearts and their Lithuanian owner Vladimir Romanov, you are missing out on some top quality rants and general bonkerism.

Since his arrival at Hearts in 2005 he has set about tackling the ‘injustices’ perpetrated by the Scottish football against the Gorgie side.  He has previously accused the Old Firm of bribing match officials and accused UEFA and SFA officials of corruption. In 2006 he claimed Hearts would win the Champions League within 10 years and rumour has it he even tried to select himself in the first eleven a few years back!

The guy is a bit of a legend. His rants are so legendary that may people in the country who don’t even follow football in the slightest know his name. Christ, even my mother knows who he is and she couldn’t tell the difference between Joe Jordan and the real Jaws.

This latest rant from Romanov was issued from the Hearts press office yesterday as the club strives to deal with a number of off-field problems.

First up, Hearts were hit in the coffers by the SFA with a record fine of £100,000 for continued poor on field discipline, the seventh straight season that Hearts have been stung in the coffers. Hearts discipline over the last few seasons has been below the expected standard with the clubs progress hindered by a catalogue of suspensions many for red cards. Ironically this record fine comes at a time when Hearts actually cleaned up their act last season.

It is a monster fine by any standard and insiders at the club stated that Mad Vlad, as he is affectionately known throughout the country, hit the roof big time on learning of the amount. To put the fine in context, Rangers were only fined £35500 earlier this season for sectarian / racist chanting and singing. Romanov clearly feels Hearts have been given a raw deal and the club has decided to appeal against the fine.

To make matters worse last week young defender Craig Thomson was placed on the sex offenders register after being found guilty of lewd, libidinous and indecent behaviour towards two girls, aged 12 and 14, over the internet.

Amidst a campaign from club fans, parents groups and newspaper columnists to sack Thomson the club have decided to stick by the youngster stating that after an internal inquiry there were “sufficient mitigating circumstances” with regard to Thomson’s actions and although the club viewed them as very serious, they do not believe terminating Thomson’s contract to be the most progressive way forward.

Cue the launch of hellfire in the Scottish media.

And finally on Wednesday to cap it all off, midfielder Ian Black appeared in court accused of possessing cocaine at an Edinburgh nightclub.

These three recent incidents are just the long line in what Romanov clearly feels is a vendetta against the club from the dark forces of the West Coast; The Old Firm, The SFA and the Glasgow press. One this unholy trinity is the ‘Mafia’ of Romanov refers to so often.

Romanov firmly believes that this Mafia will do everything in their power to ensure that the Old Firm are kept at the top of the pile and are willing to stoop to such levels as to demonise Hearts and their players via the media, financially assault the club in the pocket and ridicule Romanov himself.

It’s not a particularly far fetched idea that those in power want to stay in that position for as long as possible at all costs. Whether that ethos has manifested itself in the form of organised Mafia ensuring the Old Firm remain at the top is somewhat unlikely.  What is perhaps likely is that individuals at the SFA and the Old Firm clearly cannot abide Romanov’s rants against them and are not shedding any tears for the Lithuanian.

Hearts actually managed to split this west coast Mafia a few years back when they finished second in the SPL behind Celtic. In fact they might have smashed it wide open if it were not for Mad Vlad himself. His interference in first team selection policy sparked a loss of trust between himself and then manager George Burley resulting in the latter walking after only nine league games with Hearts sitting top of the league unbeaten.

There is a school of thought to suggest that Hearts could actually have won the league that season if it were not for the Lithuanian micromanaging tasks he knows nothing about.

Romanov’s interference in team selection and signing policy has constantly been a thorn in the side of the club. He may have pumped money into the club, but it has rarely been spent wisely. More often than not its been spent on, and lets be polite here, players with below average ability such as Christian Nade and Juho Makela. There are countless others. The list is long but distinguished as Anthony Edwards once said.

Recently though he has taken more of a backseat since Jim Jeffries took over the manager’s office. There is little doubt that Jeffries only took the job on the condition that Romanov did not interfere with first team matters.

Jeffries, a firm fans favourite who is in his second spell as manager at the club, has done a fine job at Hearts recently and the club look well placed to challenge the Mafia, i mean Old Firm, once again next season after a series of good summer signings.

However that could well be the cue for Romanov to stick hi oar in, just as he did with George Burley. To save him the trouble I would give him this simple piece of advice.

Leave the matter of team affairs to Jeffries and let him try and work his magic. If you truly want to challenge and destroy this ‘Mafia’, keep your mouth shut, keep your head down and get your cheque book out instead of posting mad rants on the clubs website. Otherwise it only focuses the attention of the Mafia firmly on you on your club.

One thought on “Romanov and the Mafia – The Latest Installment”