From The Turf, a football website on the go since 2013, comes a new quarterly magazine that you can pick up for free on request.

Having become so accustomed to finding my football stories online, it was quite refreshing to sit down with a physical copy of some good writing, and the newspaper look and feel of the Turf Quarterly will appeal to the remaining traditionalists out there. 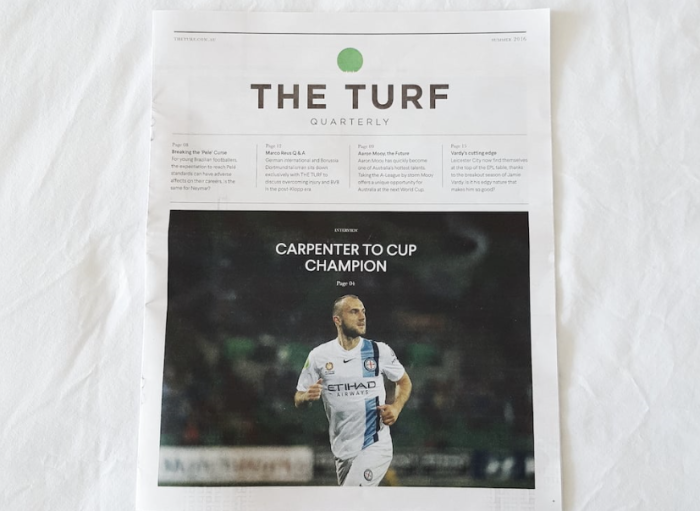 European football fans will probably head straight to page 12 for the Q&A piece with Borussia Dortmund and Germany star Marco Reus who discusses his injury woes, missing out on the World Cup Final, and Borussia Dortmund’s Bundesliga resurgence.

I’m not the kind of guy to mope around and let it [injury] drag me down. Of course, you always ask yourself ‘why me again?’ But then the [recovery] mechanisms kick in and you to get back to full fitness as soon as possible so you can help the team.

Given that The Turf is an Australia based publication, it’s no surprise to see the A-League feature prominently, and there is a great interview with Melbourne City full back Ivan Franjic who has had an interesting career as part of Brisbane Roar’s all conquering side prior to experiencing a spell in Russia.

Franjic was a member of the Socceroos’ Asian Cup winning side of 2015, and in the feature the 28-year-old discusses his rise to prominence from playing semi-professional football and working as a carpenter just five years ago.

I think sometimes Australian [players] don’t believe in their abilities and that they’re good enough, but by believing in myself I was able to make it to the next level.

Franjic’s team mate at Melbourne City, Aaron Mooy, is one of the best players in the A-League and has been subject to plenty of speculation around his future so Turf Quarterly discusses the hype and what might happen next for the 25-year-old.

Returning to international matters, there’s a look at the pressure that comes with being labelled ‘The Next Pele’ and how Barcelona star Neymar Jr. is handling the limelight compared to former starlet Robinho.

A feature on in-form Leicester City striker Jamie Vardy will satisfy those interested in the English Premier League and nicely rounds off a promising first offering.

Issue one is out now and all that the publishers ask in return for sending out a copy is that you cover the postage costs for delivery of what is a very easy on the eye 16-page spread.

To order your free copy of Turf Quarterly, simply head to The Turf website and follow the instructions.