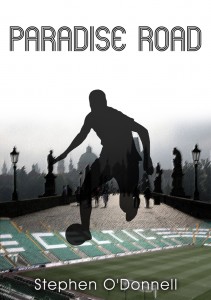 Stephen O’Donnell’s debut novel, as the title implies, takes us on a journey; that of Kevin McGarry as he tries to make sense of life after failing to make it as a footballer, whilst giving the reader a window into a section of the Scoto-Irish Catholic community in the west of Scotland and dealing with other contemporary societal and footballing issues.

The work, though not solely preoccupied with football, offers an insight into the world of hardcore football fandom as Kevin follows his beloved Celtic around Scotland and beyond.

O’Donnell doesn’t romanticise this world but portrays it in all its vulgar glory with a fondness and keen, dry sense of humour.

The story unfolds by way of a series of vignettes and the reader is guided through these, for the most part, by the engaging first-person narrative of the aforementioned protagonist in a blend of the vernacular and Standard English that, rather than appearing inconsistent, seems appropriate given the character’s university-educated working-class background.

The novel treats many of the topical themes in modern football, such as the media, TV broadcasters and ticket pricing.

Kevin despairs at the way football has changed and become something corporate, expensive and altogether more sinister than it was in his younger days (and before) and thus alienates many of the people who truly made the game what it is. This is something that many football fans of all clubs can relate to, as is the quote from David Conn featured as an epigraph.

Kevin’s disillusionment with modern football is mirrored by his disillusionment with other aspects of modern life and society. Discontent with his lot as a joiner in Scotland, and considering with varying opinions the fates of his pals, Kevin broadens his horizons and begins to look abroad…

Any work which even touches upon football in the west of Scotland inevitably will have to confront the issue of sectarianism, and O’Donnell doesn’t shirk from this, tackling the problem head on with on-the-ground perspectives.

These things considered, this novel may be recommended to those with an interest in modern Scottish fiction, the socio-political and sectarian issues facing Scottish society and the concerns of modern football.

The title and cover of the book may put off non-Celtic fans but it is certainly not a novel exclusively for those of a green-and-white-hooped persuasion; however, those that are will be familiar with many of the references and thus make easy candidates for a recommendation.

All in all, an enjoyable, humorous and thought-provoking read.