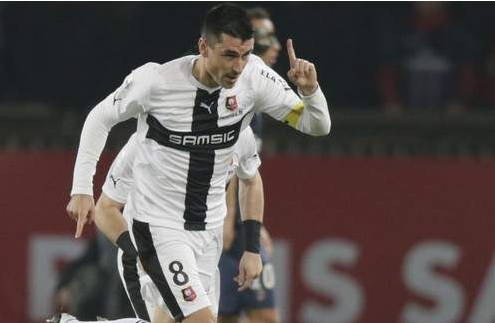 Only a few weeks ago the vultures had begun to congregate around the Stade de la Route de Lorient, their intended target the managerial reign of Rennes coach Frederic Antonetti. Missing the European places on the final day of last season had been a tough blow to take from the Breton side, rumours that Antonetti would replace Didier Deschamps at Marseille filled the summer, so when they started the season with only one win in six games the fingers began to point at a coach who’s abilities had been vastly questioned in the past.

Over a turbulent summer les Rouges et Noir had lost a number of good players. Alex Tettey, Razak Boukari and Tongo Doumbia made the move to England, Jires Kembo-Ekoko and Kader Mangane also left for pastures new, and the Yann M’Vila transfer saga ran for the length of the transfer window, running so long that the window slammed shut with M’Vila still a Rennes’ player. Unable to find a suitor for M’Vila left a lack of funds for Antonetti to improve his side, Sadio Diallo returned from Bastia on loan and Jean Makoun was brought in on loan from Aston Villa to help bring some experience to this young side.

Makoun was brought in towards the end of the window with his new side struggling to find any of the form that had made the such a dangerous free-flowing side last season, but once Makoun found his match sharpness something began to click with this young side, something that has lead them to win eight of the last nine games in all competition, this run culminating in a win on Saturday night that will surely go down in Rennes history.

Facing a Paris-Saint Germain side that was looking to bounce back from their home defeat to Saint-Etienne two weeks ago, even without the suspended Zlatan Ibrahimovic, it was always going to be a tough task for Antonetti’s men, but after going a goal up twice Rennes would be reduced to nine-men when goalkeeper Benoit Costil was adjudged to have brought down forward Jeremy Menez on the edge of the box, replays showed the ‘keeper had taken the ball first, but possibly the momentum that had carried him through the French international enough for Freddy Fautrel to go to his top pocket.

Turkish international and former PSG striker Mevlut Erding would be the player sacrificed, and 27-year old Senegalese goalkeeper Cheick N’Diaye would come on for what would be only his third ever appearance for the club in seven years, and it would be a performance to remember. Reduce to nine men for 38 minutes, it would be a backs to the wall performance from the away side, defending like lions for the remainder of the game they would face 18 PSG corners, 23 shots on their goal, three of which would hit the woodwork. Opta stats would show that Rennes only touched the ball three times within PSG’s penalty area, as opposed to the 57 touches the home side would have in Rennes area.

No one was as proud of his players as coach Antonetti, and after the game he gushed with pride:

The players have been heroic and fantastic in what were extreme conditions. It is a win for everyone at the club. We have often been criticised for a lack of character but we fronted up against an excellent team.

Antonetti was also thoughtful as to what this amazing victory meant for the rest of the season:

If possible this win must act as a starting point for our season. It means nothing to win here if we then go and mess up elsewhere.

Apart from the heroics of goalkeeper N’Diaye and defenders John Boye and Jean-Armel Kana-Biyik there was another spark to the Rennes performance and a player that is building a reputation of scoring tremendous goals. Rennes’s only summer signing Romain Alessandrini moved from Ligue 2 side Clermont and has taken to the top-flight like a duck to water. Rennes pounced after the Marseille born midfielder scored 11 goals last season, and with four goals in eight starts, and every strike an absolute stunner he is quickly becoming one of the signings of the season in France.

Speaking of stunners, the camera’s seemed to be pointing as much to the stands as they were to the field, the reason being that actress Salma Hayek was in attendance, not for the super-rich Parisians but to cheer on the team in red and black. Hayek is married to Francois-Henri Pinault, the owner of Rennes and was at her husband’s side urging their side to hang on to the lead. Afterwards they both made sure to thank the travelling fans for their support, with Hayek throwing a replica jersey into the crowd.

You can bet that with a fantastic performance and a wonderful result that Hayek and the Rennes players were partying from Dusk till Dawn.