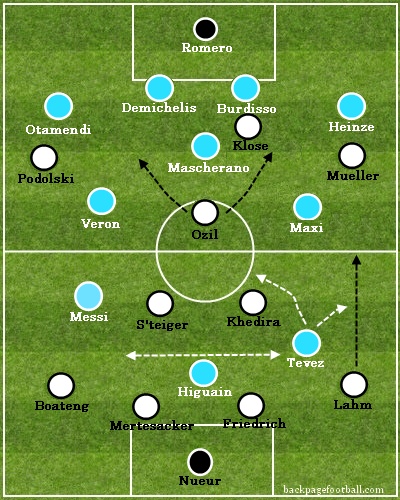 Of all the quarter-final showdowns, this is the one that has attracted most interest from football fans. Diego Maradona’s Argentina, fueled by unity and togetherness, against Joachim Loew’s Germany, built on structure and efficiency.

Like Brazil today, this will be the strongest opponent Argentina have come across so far in the competition. After comfortably pushing Mexico aside in the last sixteen, the Argies face a formidable opponent who played England off the park last Sunday. It has been clear from Argentina’s performances that the side relies heavily on the unity in the camp, held together by the colourful character of their manager. This will put Maradona’s tactical and organisation ability as a coach up to the task. A man who only ever won twice in twenty-odd club games as a manager, must pull off the correct tactical decisions against Germany – a nation known for it’s stalwart effectiveness and structure on the field.

One thing is for sure, Maradona won’t venture far from the system that has worked well so far – the 4-3-3 diamond. He could stick with the same side that beat Mexico, but he may ask questions of the midfield  three. Mascherano, the captain, is a certainty – the other two places could be any of Juan Veron, Angel Di Maria, Jonas Gutierrez, Maxi Rodriguez or even Mario Bolatti. I believe he will replace Angel Di Maria – who hasn’t fulfilled his true ability in this World Cup – with Veron. Maxi might play on the left hand side of the diamond, and use his versatility to cover Gabriel Heinze in marshalling both Thomas Mueller and Philip Lahm down Germany’s right hand side.

The final midfield place should go to Veron, primarily a central midfielder but his passing ability and assurance on the ball adds so much to this Argentina side. His central awareness will also help cover Mesut Ozil, and if needs be – Lukas Podolski out on the left. The centre half pairing is another talking point, but he will most likely stay with Burdisso and Demichelis. If he decides to change that, Walter Samuel will start.

Germany will play the same line-up that beat England, if Podolski is fit. Their main attacking outlet is of course Ozil, but their direct running from each wing is also very potent. The movement of Miroslav Klose up front gives space to these three players, who can all score goals and create chances. It’ll be mouth watering to see Javier Mascherano, one of the world’s best defensive midfielder, go toe-to-toe with the summer’s shining light – Mesut Ozil. Lahm will provide an attacking threat from right back.

That’s not the only clash of the titans in the game – let’s not forget Lionel Messi. Who will have the monumental task of keeping an eye on the world’s best player? That’ll be handed to Bastian Schweinsteiger, who’s switch to a centre midfield role while at Bayern Munich this season has been nothing short of genius. Schweinsteiger has been Germany’s most important player, a little overlooked due to the form of Ozil. He, and Sami Khedira, controlled the midfield in each game thus far, but Khedira will have more freedom to make forward runs. Schweinsteiger will square with Messi.

In conclusion, it’s fair to say that this will be one of the games of the tournament, which it already is on paper. Argentina have been playing lovely football, creating plenty of chances and proving the doubters wrong – but will harmony and concord be enough for them to overcome Germany? Diego Maradona isn’t a good tactical manager, but he has instilled a fantastic feeling of unison in the side. Germany have been everything Germany personifies; efficiency, superb tactical nous and structure, with the added mixture of quality, skill, youth and pace. Hold on tight, it’ll be good! Spain couldn’t have a more favourable path into the last four of the World Cup. After overcoming Portugal in a tight game, they face Paraguay who beat Japan on penalties. Paraguay are a decent side, but it must be said they topped a pretty weak group; a poor Italy side, Slovakia and New Zealand. This matched them with Japan, and they played out one of the dullest games of the tournament.

Spain have played a similar system throughout the tournament after their loss against Switzerland, operating David Villa from the left side of the field to devastating effect. A system that could be regarded as a lopsided 4-2-3-1, with Torres spearheading the attack and Andres Iniesta, rather than Jesus Navas, playing on the right of the three. This gives freedom to Xavi, and assurance in the two holding midfielders Xavi Alonso and Sergio Busquets, a surprising regular in the team.

Paraguay play varying styles. Now that they’re in the knockout stage, you may see some consistency and Gerardo Martino may stick to a side similar to the one against Japan, with three central midfielders and Lucas Barrios spearheading the attack, leaving Roque Santa Cruz operating mostly on the right and Edgar Benitez or Oscar Cardoza playing in from the left. The Paraguayans won’t have much expectation going into the game, they played to overcome Japan – happy to settle on penalties – and their World Cup mission is complete having reached the final eight.

Spain will surely play a side similar to the one against Portugal. Del Bosque will be reluctant to pull Fernando Torres for Fernando Llorente, who put in a good performance up front on his own after coming on against Portugal. Apart from that, the Spanish side should name itself.

Paraguay will have to deal with the phenomenal David Villa, playing in from the left. Carlos Bonet is an experienced defender, but will be no match for the class of Villa. If Santa Cruz operates from the right hand side, Bonet may need Enrique Vera to stay back and help him out. Paulo da Silva and Antolin Alcaraz again will also face the tough task of marshalling the power and pace of Torres. Nestor Ortigoza, an out-and-out defensive midfielder, will need to keep an eye on the passing and creativeness of Xavi in the hole.

Out of all the quarter-final clashes, this is the one that takes least consideration. Spain may have got off to a bad start, but the pre-tournament favourites will have too much in quality – both offensively and defensively – than Paraguay can handle.