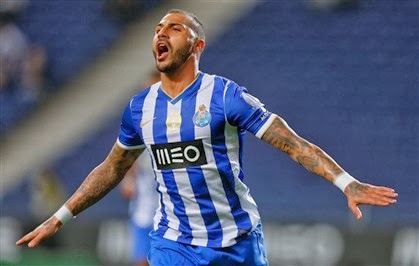 In a week where his compatriot, Cristiano Ronaldo, lifted the second Ballon d’Or of his career, Ricardo Quaresma also reached a milestone.

Admittedly, it was not as glamorous: netting the opening goal of Porto’s League Cup match against lowly Penafiel in a deserted Estádio do Dragao.

In his second spell at the club, it was Quaresma’s first goal for Porto since 2008 and, for critics, it was a fitting contrast.

After all, with just 16 months between them and with such similar styles as wingers, Quaresma and Ronaldo have constantly been compared.

For Ronaldo and Lionel Messi on the world stage, in Portugal, read Quaresma and Ronaldo.

Both are from poor backgrounds; both came through the same academy at Sporting Lisbon; both are similarly flash; and both made moves to Europe’s major leagues as teenagers.

Ronaldo, though, pushed on – in every aspect after his big move; Quaresma never hit the same heights.

On one hand, it is endearing: to this day, Quaresma’s playground trademarks – the use of the outside of his boot, the rabona cross and his stocky frame – all remain.

However, while Ronaldo’s game evolved and matured from self-indulgent wing play to frightening consistency at Manchester United, Quaresma’s stalled at Barcelona.

Despite being the first signing of Joan Laporta’s landmark presidency, and embarking on a similar way of life just an hour-and-a-half away from Lisbon, Quaresma struggled.

Scoring only one goal in 28 games, Quaresma fell out with his manager, Frank Rijkaard, and was thoroughly outshone by another young signing, Ronaldinho.

It set the tone for Quaresma’s career in the major leagues: making just 24 starts at Barcelona, Chelsea and Internazionale in three and a half seasons.

Having spent the past three years at Besiktas and Al Ahli, Quaresma’s return to Porto serves as one final opportunity to cement his legacy.

After all, looking at the peak of Quaresma’s career – his four seasons at the Dragão from 2005 to 2008 – the Portuguese had established himself as one of world’s most exciting footballers.

In short, everything good about Porto went through Quaresma; his volatility was embraced and, often, harnessed by Jesualdo Ferreira.

With Portugal, too, Quaresma was capped 23 times in this period and had firmly established himself as one of Luiz Felipe Scolari’s favourite players.

After all, José Mourinho fought hard to secure Quaresma’s signature – amid Massimo Moratti baulking at the winger’s €18.6m price-tag

Mourinho, it seemed, would be the perfect man to improve Quaresma’s work-rate and harness his individuality for the consistent benefit of the team.

Joe Cole was the perfect precedent: a 24-year-old, whose all-round game and consistency were lifted to a career high by Mourinho in 2005.

But, equally, the likes of Adrian Mutu – and Pedro Leon and Mario Balotelli in the future – would prove exceptions to the rule.

Quaresma was to join the latter group: ‘awarded’ the Bidone d’oro, as the worst footballer in Serie A in 2008.

Mourinho sought improved tactical discipline; instead, Quaresma’s obsession with the outside of his boot irritated his manager.

There was no place for egos in the Mourinho system – as Samuel Eto’o would showcase, ironically in Quaresma’s position, in 2009-2010 – and Quaresma fell out of love with the game.

Self-exiled to Turkey and Dubai for the past three years, a return to Porto, and “happiness”, is one final roll of the dice.

It really is a new start: remarkably, there are just three survivors – Helton, Lucho González and Fernando – from Quaresma’s final season at Porto just five seasons ago.

There have been three different managers since Jesualdo Ferreira’s departure, in 2010, too.

However, crucially, Pinto da Costa, the club’s affable president, has remained; Quaresma has taken his old number seven shirt; and the winger’s bond with the fans remains as strong as ever, with 10,000 attending his first open training session.

It sets up an intriguing few months for Quaresma – with the outside chance of a World Cup – but as far as six-year gaps go, there are few successful precedents.

Perhaps, that was the allure for Quaresma: ever the maverick, here is an opportunity to return to prominence his way.

One thought on “Quaresma’s final roll of the dice”