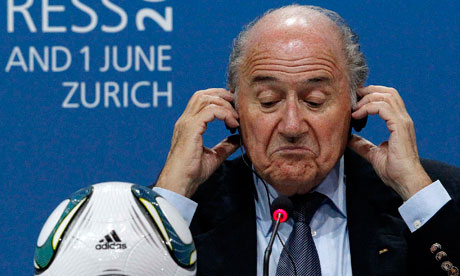 Yale University historian Paul Kennedy popularised the idea of ‘Imperial overstretch’ in his 1987 book ‘The Rise and Fall of Great Powers.’ It is the theory that an Empire can extend itself beyond its own ability to maintain military and economic commitments, in turn, causing it to collapse.

It is an interesting hypothesis when considering the position of football’s governing body FIFA. Sepp Blatter’s empire currently incorporates 209 national football associations across the world and is without doubt the most powerful stakeholder in the sport. Blatter has now wielded his power over the game for nearly 15 years arguably in the guise as football’s very own autocratic dictator.

Admittedly, the former FIFA technical dictator was democratically elected to his position, but the validity by which each of his terms of presidency have been achieved have been shrouded in controversy. The 77 year-old has been dogged by continuous accusations of corruption and direct bribery in return for votes. Indeed, even in his unopposed election of 2007 only 66 of 207 FIFA members nominated the Swiss born candidate. Further allegations of financial corruption centred around illegal payments being made to FIFA officials by it’s now bankrupt marketing partner International Sports and Leisure. Blatter escaped the investigation unscathed but FIFA’s reputation certainly did not, a fact not lost on the governing body’s president himself.

Yet, he has been allowed to continue to ride rough-shod over the world of football with hubristic arrogance, despite a catalogue of worryingly insensitive public gaffes. Whether it’s suggesting female players wear tighter shorts and low cut tops, or arguing that Luis Suarez’s racist abuse of Patrice Evra could be corrected merely with a handshake, Blatter has lost all sense of real legitimacy in the eyes of most football fans, but yet has remarkably maintained his extravagantly paid position throughout. However, it is FIFA’s decision to award the 2022 World Cup to Qatar that has proved the most contentious issue of his Presidency. Once again rumours of financial bribes were rife, with two of Blatter’s executive committee members Amos Adamu and Reynald Temarri being suspended for taking bribes, all but confirming (albeit unofficially) the depressing notion that the World Cup bidding process has become little more than a battle of the back-hander’s.

Furthermore there is the matter of awarding the tournament to a nation where homosexuality is illegal; “I would say they [gay fans] should refrain from any sexual activities,” Blatter jovially quipped. And if that wasn’t enough (which it definitely should have been), there is also France Football’s Philippe Auclair’s recent findings, that “the situation of migrant workers in Qatar, who represent well over 90% of its workforce, was akin to modern-day slavery,” and that “More workers will die building World Cup infrastructure than players will take to the football pitch unless steps are taken to reform working conditions in Qatar.”

But despite this staggering ignorance by FIFA towards the host nation’s ignorance of labour laws and basic human rights, it is the body’s attempt to move the competition to a winter schedule to accommodate the middle-eastern climate which could represent the governing bodies very own imperial overstretch. It is this decision which has most potential to represent the sport’s biggest power with its very own form of blowback. Firstly, it is a decision which could have major legal ramifications if rival 2022 bidders Australia, USA, Korea and Japan come to the realisation that they spent millions on a bidding process built on staggeringly false pretences.

Most significantly for FIFA’s future however could be the fact that it is this decision which puts it on a collision course with its most powerful colonies. Moving the competition to winter poses a logistical nightmare for the major European leagues. English Premier League chairman Richard Scudamore has described the switch as “nigh on impossible” and he has not been alone in his vocal criticism of the switch to winter. It is surely not completely unforeseeable that switch will occur but that the European and maybe even South American leagues affected will not be accommodating? A potential boycott if you will. It is this potentiality which could turn the biggest issue in world football today, into its biggest crisis. Perhaps nowhere else in the world is the power of club football displayed more prominently than in England which harbours the most watched sports league in the world and a national team at arguably its lowest ever ebb in public opinion.

In a battle between FIFA and it’s most powerful member’s there is certainly no guarantee the governing body will maintain the current status quo. If Blatter cannot secure his ideal outcome, where does that leave a governing body, unable to adequately and legitimately deliver its show-case event? Indeed, does the necessity to switch the World Cup in the Emirate to winter, provide Club’s with an opportunity to assert their power over the much criticised organisation? FIFA may have indeed finally overstretched, because although not economically strained it has undoubtedly shown itself to be morally bankrupt, weakening its legitimacy in the eyes of the football watching world, as it is confronted with its largest crisis to date, and one which is entirely of its own making.