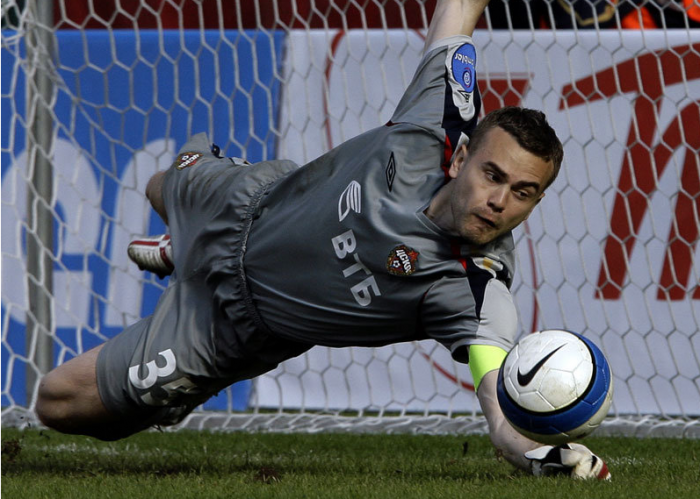 Derbies are always tense affairs. In the heat of the moment the possibilities are practically endless as the emotionally frenzied nature of the crowds feeds into the veins of the players of the pitch.

Rivalries provide football with a sense of continued purpose, like no other. We can thank such affairs for some of the most lasting memories through the various generations who have supported for the game. Graeme Souness’ planting of the Galatasaray flag in the centre circle of Fenerbahce’s Şükrü Saracoğlu pitch or the image of 194,603 people cramming the stands of the Maracana to witness Flamengo take on Fluminense in 1963 are moments of lasting heritage. Such events will stand the test of time despite the transformations that football will inevitably continue to undertake.

Spartak Moscow’s fixture against their bitter city rivals CSKA continues to be the highlight of the Russian domestic calendar and as there recent clash shows, this is with great reason.

As a football match, it literally had everything you could either want or expect. The unrivaled passion that swept through the cavernous Luzhniki Stadium was tangible as the circular stands housed the largest crowd of the season – with fans unfurling huge banners baring images of hooded hooligans, clowns and a hand holding a grenade simply saying ‘burn’. The increasingly cliche pre game ritual which sees each end of the stadium holding aloft a mosaic is an effect that only a Moscow derby can truly pull off – as the stadium became awash with colour and vibrancy amid the overwhelming intensity.

The match itself was an unbridled mix of enticing football and pure aggression as the unnervingly relentless din of the crowd festered among the players. The game threatened to turn into a free for all after merely 25 minutes of play after a collision between Spartak’s centre forward Welliton and CSKA’s goalkeeper Igor Akinfeev. The Brazilian challenged for a high loose ball – that in reality he had little chance of making cleanly – and in turn pummeled into the oncoming Russian number one. It was a clash that set the blood boiling of those on the pitch and in the stands as Akinfeev lay on the floor clutching his knee Spartak’s Ari and Rafael Carioca sought to defend their team mate’s actions amid a torrent of pointing fingers and gesticulation.

Akinfeev was unable to remain on the field due to the severity of the injury – which was later diagnosed as being damaged cruciate knee ligaments, an area he had previously had surgery on in 2007. The extent of the problem for Akinfeev will see him ruled out up until the New Year in a hugely disappointing turn of events for both CSKA and the Russian national team – as Dick Advocaat looked on worriedly from the stands.

It is a shame that such an issue should cloud what was a fascinating tussle of attacking football that saw each team score two goals a piece – with Spartak’s second being a 25 yard peach from summer signing Emmanuel Emenike. However in the wake of the full time whistle the focus has ultimately remained firmly rooted upon the events that took place between Welliton and Akinfeev.

CSKA’s general manager Roman Babaev has since gone on the record denouncing the actions of Welliton by stating that: ‘it’s not the first time Welliton attacks the opposing team’s goalkeeper in an underhand way. Welliton attacked Igor (Akinfeev) deliberately forcing him into an awkward landing, that caused the injury.’ That statement itself may not seem particularly threatening however further comments made by the CSKA official express a certain degree of uncontrollable anger towards the Spartak forward as he goes on to claim that Welliton ‘should be much more careful at the streets of Moscow from now on’. Such comments only serve to heighten what is already an raging debate and it seems ludicrous that CSKA should in any way insight acts of vengeance from their – often volatile and violent – ultra fanbase.

Valery Karpin, Spartak’s beleaguered coach, reacted strongly to the comments from Babaev by denouncing them as ‘absolutely unacceptable’ – while also promising to ensure that the powers at be take suitable action against CSKA’s general manager. The situation looks set to continue to rage for some time yet as the Premier League’s ethics committee is set to act upon several incidents that occurred during and after the match and punishments will likely be handed out in earnest – however they are unlikely to strike fear into the hearts of any of the perpetrators.

The final 2-2 scoreline as well as the match itself have ultimately found themselves overshadowed by an incident that perhaps would have been such a talking point in any other fixture in the league. However as the remnants of pig’s heads are collected from the streets outside the Luzhniki – due to Spartak’s nickname as ‘the meat’ – the Premier League and Russian Football Union are left to pick up the pieces of a relationship that continues to deteriorate.