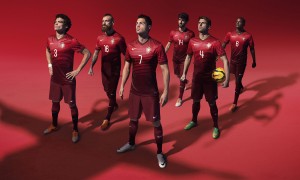 The announcement that we are less than 100 days away from the start of the World Cup usually marks the beginning of endless heated discussions and arguments about team selection- who deserves to be on the plane and who is left in the departure lounge, doomed to wait another four years for the chance to realise their World Cup dream.

One of the most difficult choices for Portugal coach Paulo Bento (and every coach since Ligue 1 legend Pauleta hung up his international boots) has always been the place of a striker to spearhead the Seleção attack, a position which has always been aided by rich midfield reserves brimming with talent and creativity begging for a proven finisher to clinically tuck chances away. The Iberians have struggled to find or produce a consistent striker of international pedigree, a goalscorer to depend on- a dilemma highlighted when taking a look at the main options available for the forthcoming tournament.

Premier League fans will probably best remember Helder Postiga for an unfortunate ‘flop’ tag brought on by a lacklustre stint at Tottenham Hotspur. English football aside, the penalty-box specialist has managed to carve a respectable career on the continent- a two year spell at Spanish side Real Zaragoza proved to be his most successful period, culminating in a total of 23 goals and a move to Valencia as a replacement (fittingly) for a Tottenham bound Roberto Soldado. The transfer across Spain looks to have jeopardised Postiga’s place in Brazil, however, and after managing only four goals all season, a January loan move to Lazio may give him a last gasp chance to fight his way back into the 23 man squad.

It’s safe to say the 6ft 3in Hugo Almeida is not the most popular of players among the Portugal fans. On paper the powerful forward seems like perfect partner for Ronaldo, a tall yet powerful striker whose strength lies in the air- disappointingly Almeida has failed to step up at international level and bar a superb assist for Ronaldo against Sweden in the crucial World Cup playoff, you would struggle to recall any meaningful or memorable contributions he has made for the national side in 52 caps. His appearance (or rather disappearance) against Spain in the Euro 2012 semi-final acted as a showcase for  his consistent inconsistencies- going missing in the big games and even failing to win simple headers or get an effort on target.

To his credit he has hit something of a purple patch for Turkish club Besiktas this year and has bagged 14 goals so far (the highest number of domestic goals out of any of the forwards mentioned here). His absence from the recent pre-World Cup friendly thrashing of Cameroon raised eyebrows for what had been one of Paulo Bento’s most picked players,  the subsequent inclusion of Benfica wonderkid Ivan Cavaleiro speaking bounds about Bento’s plans for the future and the role he sees both Almeida and Postiga playing (or possibly not playing) for the side.

Another name noteworthy in its absence against Cameroon belongs to a player who had been touted as one of the most promising prospects in recent years; Benfica’s Nelson Oliveira. After making a solid start to his Benfica career and being rewarded with a place in the Euro 2012 squad, Portugal’s search for a dependable forward looked certain to be coming to an end. What happened next could have come straight out of a young footballer’s nightmare- unable to dislodge either the popular Lima or record-breaking Oscar Cardozo from the Benfica starting XI; he ended up with even less game time during a disappointing 2012-13 season long loan at Deportivo La Coruña. In a last ditch attempt to prove his worth (and stay in World Cup contention) Oliveira headed out to French side Rennes on another year long move, this time early signs pointed to a perfect fit as he hit 7 goals in his first 11 games (after never before managing to hit more than 10 league goals in a whole season).

Unfortunately another sad twist was yet to come as Oliveira endured one of the most personally rollercoaster of games against Marseille. After embarrassingly missing an open goal attempting to extravagantly back heel a pull-back from teammate Jonathan Pitropia, when a simple tap-in would have sufficed and almost certainly put Oliveira’s name on the goal-sheet, he went on to redeem himself with a thumping rocket from just outside the box which left Marseille goalkeeper Steve Mandanda helpless.

A buoyant Oliveira was then brought down to earth with a bump, given a golden opportunity to win the game he stepped up and had a poor penalty saved. The game understandably left the young strikers confidence at rock bottom and he has yet been unable to add to his tally- Rennes January move for PSV’s highly rated Swedish goal machine Ola Toivonen has relegated Oliveira to the bench and with only a handful of substitute appearances since the turn of the year, it looks as if the final nail has already been hammered into his Rennes coffin.

The little known duo of Ivan Cavaleiro and Edinho represent the other two options offered by Bento and the striking preferences which were favoured against Cameroon. Cavaleiro is the 20 year old hot property who started the season at the Benfica B side (who play in the second tier in Portugal) and scored freely enough to end up as the sides top scorer, rewarded with a new year promotion to the senior side- warding off interest from Manchester United and an unnamed Italian club in the process.

Although yet to score for the Benfica first team he did enough to convince Bento he was worthy of a start in such an important element of preparation for the World Cup, a move which perhaps perfectly encapsulates just how desperately eager Portugal are the widen the net on the search for that top drawer striker- any promising prospect is thrown in, for better or for worse. It would surely take the most cold hearted of person to deny Cavaleiro his Portugal debut, but when you realise that the English equivalent would be a young Championship or League 1 striker impressing enough to earn a January move to the Premier League team and then after a handful of fruitless games go on to earn an international call-up you realise just how much pressure Portuguese strikers are under.

The last option for the Portuguese is the surprising name on the goal sheet in the recent friendly- Edinho, a little known but well travelled forward who reacted to limited opportunities at Braga with another one of those transfers only World Cup years can provide; risking it all on a January loan move to Turkish side Kayseri Erciyespor. His reward for the move has been a fantastic return of 5 goals in 4 games, hence the unexpected call up and a fairytale goal courtesy of a Ronaldo rebound for his third goal in six caps; four years after his last game (his second goal was so long ago, Brazilian born Portuguese legend Deco provided the assist).

Speak to any Portuguese followers about this topic and one emotion is always conveyed- how can you have a player like Cristiano Ronaldo alongside a Helder Postiga, Edinho or Hugo Almeida. Granted Nelson Oliveira and Ivan Cavaleiro are exciting prospects for the future, but at this moment in time Portugal just don’t have a forward on the same level that other nations can rely upon. What Portugal do have (finally) is a coach at the helm who seems have built a system that fully showcases a terrifying Cristiano Ronaldo at his peak; able to happily and rousingly carry the attacking and goal scoring responsibility. Come June we’ll see if that’s good enough.