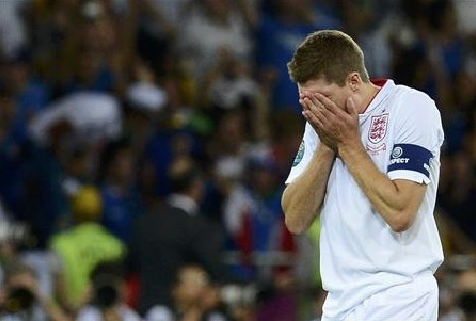 I’m not sure when my attitude to the England team went from nervous enthusiasm, to casual indifference, to total cynicism. I remember jumping round a Leeds pub during the 2004 Euros, when Sol Campbell’s perfectly good goal was ruled out, and cramming enthusiastically into The Branch in Shipley for the World Cup quarter final two years later.

But by 2007, all this had changed. I felt nothing as England fell to Croatia in a Euro 2008 qualifier at Wembley, on a night when Steve McLaren’s umbrella was a gift to gleeful headline writers. The England squad that day included Lampard, Gerrard, Cole and Defoe. These were some of the over-hyped players who had been in our faces throughout the Premier League season, giving full commitment to their clubs before slumbering through England games.

There are other reasons for my reluctance to back Our Boys; chief among them the serial poaching of players after major tournaments. Seeing your club’s former charges littering the national team is soul-destroying. You begin to question the England players’ priorities, particularly those from ‘big’ clubs, when poor, non-committal performances and early exits (South Africa was the classic example) are followed by transfer requests from their teammates. “The results were terrible boss, but I tapped up that left-back you told me about”.

Players have always moved after World Cups and European Championships – half West Ham’s squad left post – Japan/Korea 02 during Chairman Terence Brown’s shameful fire sale. But am I the only one to feel that the trend has increased in the last ten years? With the Premier League’s lucre, and with major championships viewed as bring and buy sales by agents, the departure of your best players is almost expected.

Truth be told, the England squad is now little more than a Premier League recruitment camp. Had Grant Holt been picked for the Euros he would have no doubt received the customary ‘come and play for us’ in a quiet corner of the training ground. Ironically, his England rejection may have kept him at Norwich a bit longer, though once he realises – if he hasn’t already – that players from ‘small’ clubs rarely get picked for England, the transfer request won’t be long in coming. How many times have you heard commentators say of an England starlet. ‘He plays for (insert your middle-ranking club here) but for how much longer?’ About as long as it takes one of his international colleagues to tap him up; totally unofficially of course.

A couple of the players also come between me and wholehearted support for  England. Though a quarter final was a worthy achievement for an undervalued manager and players tagged no hopers back home, I found it difficult to support a squad containing John Terry and Ashley Cole. Terry, lest we forget, had a racism allegation pending during the Euros. Though he is innocent til proven guilty, this is something that would have seen him suspended from any other job until the hearing, and to have the dignified Hodgson call him a ‘Warrior’ was baffling. Rio Ferdinand was then excluded from the squad, and Roy Hodgson’s citing of football reasons for his omission, (rather than Anton Ferdinand’s involvement in the Terry affair), convinced nobody. Meanwhile Cole’s sundry misdemenours since joining Chelsea – of which the shooting incident is just one – stick in the throat.

As England were battling it out with Ukraine for a quarter final place. I turned down the sound and used the Smith’s ‘Louder Than Bombs’ to soundtrack the action. A strange choice perhaps, but still preferable to the ‘famine or feast’ analysis and ludicrous build-up for Rooney pre kick-off. Did I want England to win the Euros? Honestly, I wasn’t worried either way. The world won’t stop turning. And with no West Ham players in the squad (and I know we deserve what we get after Tevez etc, etc.) there’ll be no unwelcome approaches from wealthy suitors. Well, not til James Tompkins get selected.