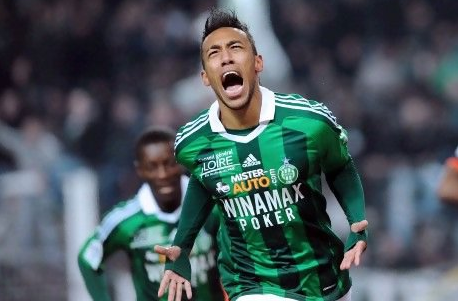 Paris Saint-Germain v Marseille may be the biggest game in France, but with around 480 miles separating the two cities it isn’t exactly a local derby. One of the most passionate derbies in French football is the Derby du Rhône. The meeting between Saint-Etienne and Lyon has been around since 1951 and the close proximity of both sides has built it into one of France’s fiercest derbies. This weekend the teams meet at the Stade Geoffrey-Guichard with Lyon starting the weekend top of Ligue 1 and the host’s a mere five points behind in third place, if either side wants to go on to lift Le Championnat this season this game could be crucial.

Lyon continued their good form after the win over Marseille with a narrow 1-0 win over Champions Montpellier. Hat-trick hero Bafetimbi Gomis scored the only goal of the game after some wonderful play from Clement Grenier and Gomis fired the shot past Montpellier’s third-choice goalkeeper Jonathan Ligali.  With Saint-Etienne having already played Lyon knew the win would take them five points clear going into the derby, a match in which they have dominated for the last two decades. Les Verts started the weekend on Friday night with a goalless draw away at AC Ajaccio, in the end it will seem like two points dropped but it could have been much worse.

Many teams have struggled to come away from the Stade Francois Coty with all three points this season, just ask PSG. In fact all season there have only been six goals in all Ajaccio’s seven home games. So with top striker Pierre-Emerick Aubameyang rested and Ajaccio midfielder Frederic Sammaritano missing an absolute sitter in the dying minutes coach Christoph Galtier was somewhat relieved to leave the island of Corsica with a point:

The last 30 minutes were tricky and we had to be content with defending. But it is a good point to have won. We have had a good week with a win against Valenciennes, beating PSG in the Coupe de la Ligue and this draw. Now we have ten days to prepare for the derby.

In those 10 days Galtier has to come up with a plan and a strategy that will guide his side to their first victory at home to their rivals for the first time in 18 years. It seems outrageous that you have to go way back to 1994 to find Les Verts’ last win over Lyon at the Stade Geoffrey-Guichard. Former France coach Jacques Santini was in charge that day as defender Pascal Despeyroux started the scoring in the second half and the 3-0 win was secured when striker Etienne Mendy struck twice in the last 10 minutes. Imagine if you had told the celebrating Stephanois that they wouldn’t celebrate like this for the next 18 years, doubtful anyone would have believed you.

In the 13 meetings since the 1994 victory Lyon have won seven, with the other six ending in a draw, most games were won by the odd goal, but recently Lyon’s dominance has shown through, the 4-1 win in 2011 has been Lyon’s biggest margin of victory in the past 18 years. Amazingly only one player from the Saint-Etienne side that played that day will likely line-up against Les Gones on Sunday night. Moustapha Bayal Sall has been a revelation in recent weeks, a huge surprise since he went 18 months without pulling on the les Verts jersey, which included two games on loan at Nancy. It is fair to say that when he was picked to start against Zlatan Ibrahimovic’s PSG that not many expected him to put in one of his best ever performances. Now he will be tasked with stopping the former Saint-Etienne and now on fire Lyon striker Bafetimbi Gomis from finding the back of the net.

Although reduced in capacity you can guarantee that the 26,000 fans that fill “Le Chaudron” on Sunday will be full of voice and more importantly, hope. This is without doubt the best form their team have shown in recent years and with striker Aubameyang likely to return to the front-line, there is a great chance that the team in green can finally banish their awful home record against the current league leaders. Three points either way will not hamper either sides title ambitions but a victory would do wonders to winning side’s confidence.

A win isn’t going to take Lyon all the way to the title in May, but it will continue the magnificent run that Remi Garde and his side are on, with each game they look stronger and stronger. And for Christoph Galtier’s side it is a chance to banish a demon and put the past behind them. Just like Montpellier last season, no one is expecting them to win the league, but a place in the top three would signal a tremendous season, and return Saint-Etienne to the pinnacle of French football where they belong.

If the awful home run was to continue on Sunday night for les Verts then it could cast a spell on the rest of their season.