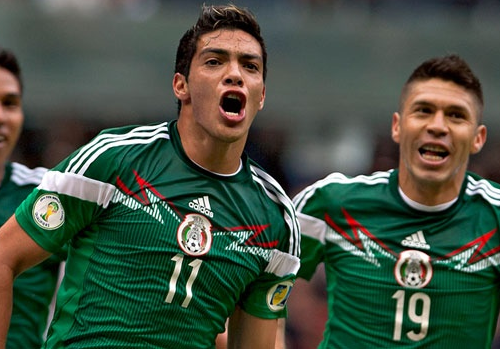 A good showing for Mexico at this World Cup would be to make the second round. Strange thing to say, given that Mexico are the current Olympic Gold Medalists and that they have qualified for the last sixteen in each of the last five World Cups, but it’s a realistic assessment of a team that has lurched from crisis to crisis in the past two years.

That they were handed a spot in a group, maybe not of death but certainly of some horrors, alongside hosts Brazil, Croatia and Cameroon, makes the job at hand that much harder. Their manager, Miguel Herrera, has talked up the side’s chances as potential World Cup champions, and has even gone as far as booking flights home from Brazil for the day after the final, but they would do well finish second and set up a potential clash with either Spain, Chile or Holland, no disrespect intended for Australia.

But a major source of doubt for the side has also led to being one of their strengths. The national side had four different managers in 2013 alone, with the current boss taking over in October. That has given the side a strange unknown quality, unknown because it is being said that the side themselves don’t really know how they’ll play. Herrera has his preferred formation of 3-5-2, or 5-3-2 depending on if your glass is half-full or half-empty, with wing backs providing the strikers with support. The trouble comes from the team having not played it enough for them to be fully sure of their roles in it. One thing is for certain though, Mexico has a history of entertaining football and this side look to be no different from the rest.

To fully understand how low morale is in Mexico entering this World Cup you must go back to 2011. There they beat their arch-rivals, the US, 4-2 to capture the Gold Cup with a young side that showed the potential to turn themselves in to the best outside bet in Brazil in 2014. Mexico has only ever progressed to the last eight of the tournament twice, in 1970 and 1986, both World Cups held in Mexico itself. This 2011 side offered hope of not just equalling that feat but of also going much further. Young, playing fantastic football and with a manager the nation loved and respected in Jose Manual “Chepo” de la Torre, the side made the whole country dream.

Third place in the u-20 World Cup in 2011, winners of the u-17 World Cup the same year and the Gold Medal at the London Olympics in 2012 only served to turn those dreams into a hopeful reality. All those dreams came apart in the final stage of the CONCACAF qualification however. The team was supposed to be assured a place at the World Cup in 2014, some saying they could be the greatest side the region had ever seen, but they fell to pieces, only winning two of their ten matches. Results, including losses to Costa Rica, Honduras and the US, sent the nation’s football fans in to a panic, further dropped points at home to Jamaica and on the road meant that Mexico were left with the humiliation of having to rely on the USA to beat Panama in the last round of games just to get a playoff spot. In that time Chepo was fired, his successor lasted only one match and a third boss was only given two. The hope of the nation turned in to a national disaster, but there is still some hope in this group of players.

When the squad was announced it had a large national league element, making it something of an unknown for European football fans. The biggest name is obviously Javier Hernandez of Manchester United, but players like Rafael Marquez, ex-Barcelona, Hector Herrera and Diego Reyes, both of Porto, and Gio Dos Santos, ex-Spurs and now playing at Villarreal, should also be well recognised. Most will look towards Hernandez to provide the goals but Oribe Peralta banged in ten goals during the side’s tepid qualification campaign and should be seen as their leading scoring threat. Hernandez has maybe suffered too much in his lack of game time at Old Trafford this year and could have done with a loan move in January.

In a group as tight as Group A promises to be though the side won’t be able to just rely on outscoring their opponents. Cameroon are a decent side with Samuel Eto’o leading the lines and Croatia are a proven World Cup threat. It’s what makes Group A so intriguing. Most will expect Brazil to advance but the battle for the second spot could go to any of the three remaining countries. The host nation will also need to be wary, an opening day draw or loss to Croatia would leave them worried ahead of their match against Mexico, who beat them in the Olympic Final in 2012.

To have any chance against Brazil though Mexico will have to rely on a predicted center spine of Marquez, Jose Juan Vazquez, and either Jesus Corona or Guillermo Ochoa in goals, most likely it will be Corona. It is expected the side will play a 3-5-2 formation with Paul Aguilar and, possibly, Miguel Layun, operating as wing backs so their center will need to be marshalled well by the aging Marquez. Look to the side to sweep forward in numbers when on the ball, they break fast and often commit six or seven players to any one attack. This also leaves them open at the back when the attack breaks down so above all else you should expect goals from their games. A final day meeting with Croatia is likely to be the decider as to who advances and who goes home, but first Mexico will need to ensure they take points off Cameroon in the opener.

It will be close but given the hope that this side once inspired throughout their countrymen than it’s the least the players should be thinking of.