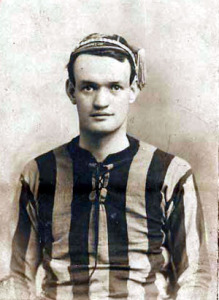 Leinster to London, via Manchester and Mexico. It has the ring of a quirky odyssey, a story of locales as contrasting as the weather. For Patrick O’Connell, however, these were the pitstops on his journey from pre-partition Ireland to a penurious death in the UK capital.

The nature of his birth and demise is hardly unusual to Irish ears, of course. London’s roiling vastness has long claimed more than its fair share of forgotten celtic souls, but the details of O’Connell’s biography — those volumes between grimly familiar bookends — are enough to mark him out as someone whose tale is worth telling, over and over.

O’Connell was a famous figure of Irish football during the early third of the 20th century, yet his memory has faded in the decades since he passed away in 1959. Born in Dublin, O’Connell’s childhood was grounded in the gritty surroundings of Drumcondra, an area on the city’s northside famed for its love of soccer – the garrison game.

A natural footballer and solid defender, he graduated from amateur level to the professional ranks with northern giants Belfast Celtic. He moved to Britain thereafter, earning contracts at stately destinations like Sheffield Wednesday and Manchester United, where he was the first ever Irish player to appear in, and captain, the first team. Spells at Hull City and Dumbarton rounded out his résumé along with the six caps — and the 1914 Home Championship — he won for Ireland. Retiring in 1922, O’Connell’s time on the pitch had been a varied and respectably unspectacular one, but it was his post-playing years that threw up his most remarkable achievements.

With little experience of life outside the British Isles, O’Connell’s decision to embark on a prolonged continental expedition that same year was hardly insignificant. In many ways his sense of adventure was telling. The opportunity to steep himself in the game he loved, through the filter of a fresh culture, proved irresistible and thus, at the age of 35, he accepted the manager’s position at Racing Santander, succeeding former English international Fred Pentland in the process. That change of scenery proved invigorating. Embracing the challenge, the pioneering young coach adapted quickly and led Santander into a new era as an original member of La Liga.

The remainder of O’Connell’s managerial career was spent on Spanish soil and it was as at arguably the greatest footballing institution in Iberia that he ensured his position in the rich tapestry of a superpower. Following stints with Real Oviedo and Real Betis — where he secured Los Béticos‘ first, and only, La Liga title in 1935 — he landed the role of manager at FC Barcelona, that gleaming bastion of Catalan style, culture and stubborn political independence.  This was a seminal five-year tenure, for O’Connell went on to steer the club from a course of near oblivion.

There was success, as there always will be in such a place, but matters of deeper resonance than a final score soon came into focus. Ominously in 1936, a year after he took up his post, the Spanish Civil War erupted. Its horrifying destruction swept over the land and for Franco’s nationalists there was little room in their Spain for the country’s healthy brew of distinct regional identities. The Basques and Galicians were deemed culturally subversive. So too were the Catalans and no edifice was more representative of that that group than the mighty Barça.

In August 1936, less than a month after the hostilities began, club president Josep Sunyol, a prominent journalist and left-wing activist, was murdered by fascists. If there had been doubts before, there were none after; the regime’s attitude towards Catalonia was clear.

Against this raging backdrop, O’Connell was expected to oversee the team despite the spectre of war and the loss of personnel who had joined up to fight Franco. Starved of meaningful competition due to the suspension of La Liga, the team barely scratched a hobbled living in local leagues, its existence has never been under a more deadly threat.

When O’Connell agreed to take his team on an all-expenses-paid summer tour of the United States and Mexico in 1937, the decision offered more than one shred of salvation. His Catalan players were marked men, his employers teetered on the edge of bankruptcy. He struck out into the unknown once again, traversing another continent, aware of few certainties.

Apart from one. The £15,000 bounty on offer signified the continuation of a tradition which lived and breathed, shouted and sang, unrestricted by the confines of the football field. Més que un club goes the Barça motto. Whatever corporate necessities have subverted the modern understanding of this mantra, it once held undeniably potent connotations. For O’Connell, a proud Irishman of staunchly working-class stock, his choice was no choice at all.

The tour was a profitable undertaking, providing a platform to highlight the atrocities, the injustices, of Franco’s Spain. When he returned to Europe, O’Connell did so minus twelve players whose decision to remain in exile was surely fuelled by the fear of fascist reprisals in their homeland. Upon reaching Paris, O’Connell acted quickly to salve Barça’s wounds, depositing the sizeable takings in a Swiss bank account to avoid any confiscation by the nationalists.

Given his actions, there is no little reverence for his feats in Spain. He would be christened there for a second time. Don Patricio etched his name into the folklore of Barcelona as saviour and leader, a man who came from a verdant land across the sea where football and a fierce spirit of freedom each thrived in the presence of the other.

In many respects, the centrality of O’Connell to the survival of a footballing blue-blood lends the manner of his death an especially heartbreaking air. He left this life alone and destitute in the lodgings of a pauper, long before the game’s booming epoch. This was a truly sad departure.

The Patrick O’Connell Memorial Fund was launched at the tail-end of August and the gilding of its namesake’s legacy is at the forefront of the movement. Its goals, for now, are fairly straightforward.

O’Connell’s humble, unmarked grave rests in Kensal Green, London. The Fund, which counts amongst its major supporters O’Connell’s grandson Michael and former Northern Ireland striker Gerry Armstrong, intends to install a new headstone paying proper tribute to the man in question. It hopes also to erect a monument at the site of Belfast Celtic’s old stadium. A shopping centre replaced the iconic Celtic Park many years ago, though it now houses a museum dedicated to that lost team.

Various fundraising events are planned, a notable example occurring in February at Hillsborough, O’Connell’s old stomping ground and one of English football’s true cathedrals. Notable endorsements, from Franz Beckenbauer and Johann Cruyff, to Luis Figo and Oliver Kahn, are rolling in, a recognition, perhaps, of the subject’s stature in Europe.

A commemorative statue sits in a Seville park, celebrating that distant triumph of 1935. It features O’Connell, who managed both of the city’s grand names, Betis — where he was twice in charge — and Sevilla. Aside from such dedications, however, tangible recognitions of O’Connell’s contributions to the sport he loved are almost non-existent outside of Spain.

He was nothing if not enigmatic and it is probable that his extended sojourn, far beyond once parochial borders made little impression, in either Britain or Ireland.

He was, it must be noted, no angel. His embroilment in the notorious match-fixing scandal of 1915 stuck to him long after he was cleared of any provable wrongdoing. Furthermore, his domestic affairs, while hardly germane to his sporting ones, was marked by dysfunction and suspected infidelity. Indeed, his solitary end might not have been so had he not abandoned a family to poverty in his final year as a player.

Whatever O’Connell’s personal failings, his narrative is undoubtedly human; it is endlessly compelling. No fault can be found in seeking to recognise the deeds of a man who chose his own route, for better or worse. Without his input, the world should seem a less interesting place. A region would lack a defining totem, its people much poorer for the absence.