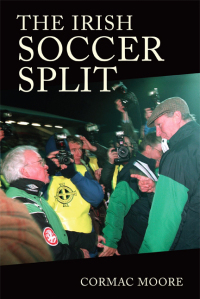 Sporting website The42.ie have published a selection of interesting insights, garnered from a discussion between Paul Fennessy and Cormac Moore about the latter’s new book The Irish Soccer Split, in a piece entitled, “Why don’t we have an all-Ireland soccer team and will we ever see one?”.

The Irish Football Association (IFA), founded in Belfast in 1880, was, of course, the original football association in Ireland and was, at that time, officially representative of the entire island. It remained the sole national governing body for a period of over forty years.

Moore’s book, however, primarily documents the 1921 establishment of the Football Association of Ireland (FAI) in Dublin and examines the respective paths, sometimes crossing, of the two football associations on the island afterwards.

The will to form the FAI arose out of disgruntlement within the IFA’s nationalist-inclined provincial Leinster associate, based in Dublin, over how it felt football was being run across the entire island by the unionist-dominated mother association in Belfast; those in Leinster perceived an Ulster-bias to be evident.

The build-up to and developments of this tense period of time in both Irish national and sporting history were also covered in episode one of RTÉ’s 2012 documentary Green Is the Colour (from 37:07 onward in the video).

For his book title, Moore has chosen the word “split” to describe the FAI’s establishment – certainly, it makes for a snappier, more concise title and the process by which two associations came to exist on the island has indeed long been popularly understood or described in such terms – although I contend that this may not be the most appropriate term to describe the development of a second island association, as it might be suggestive of there having been a deliberate partitionist spirit within the new organisation. To assume there was such a spirit would be to misunderstand the events of the day.

The FAI was originally set up in 1921 (indeed, before the island was politically partitioned), not technically to split from the IFA, but to actually replace the IFA as the national all-island association. It was reported in August of that year that the organisation was the “Football Association of All-Ireland [and] as its name indicates, will have jurisdiction over all Ireland, and it is expected that clubs will affiliate from all provinces”.

Indeed, the Falls District League of mainly-nationalist west Belfast (which included clubs like West Ham and Alton United, who won the 1923 FAI Cup) affiliated with the new Dublin-based association along with other northern clubs from the predominantly-nationalist settlements of Derry and Downpatrick.

In effect, formal and official recognition was dependent upon a compromising on ideals; the association would not have been admitted to FIFA had it insisted on maintaining a 32-county, all-island jurisdiction.

As is evident from the comments section beneath Paul Fennessy’s piece, it is common for Ireland-supporting commentators and observers to wholeheartedly blame Northern Ireland fans (and the IFA) for the continuing and present-day partitioned state of football in Ireland; those who align themselves with the Belfast association are routinely accused of letting their “bigotry”, “sectarianism” and alleged propensity for violence hold back progression on unity.

One commenter posted the following patronising, if not outrightly prejudiced, “insight” into why there is one island team for international rugby but not for football:

The reason is very simple, rugby fans in the North are better educated than football fans and less disposed to sectarian views as a result, most of the Loyalist football fans in Northern Ireland are the same thugs you see at Orange marches, fat, pot-bellied, tattooed, skin-heads, who, unlike The Dude in The Big Lebowski, would never abide by a united team.

It is surprising to see that, as of the time of writing this piece, a comment so ill-informed, insulting and lacking in any degree of self-awareness whatsoever has been in receipt of 219 thumbs-up (compared to 37 thumbs-down). There are numerous other comments criticising perceived intolerance or expressing similar demonising and scape-goating sentiment; likewise, each one appears to be popularly approved by readers of the website.

Whilst this sort of misrepresentative and responsibility-shirking finger-pointing might have the superficial appearance of relieving those of us who would hope for or expect others to get behind the idea of a single, united team of having to bother thinking about what gestures or actions we ourselves could actually make or take in order to enhance the likelihood of unity, ultimately it will not get us very far and, in inevitably generating animosity within those we hope to convince, will only set us back in our quest. It is rather lazy and convenient to simply assume others to be wholeheartedly wrong, responsible or at fault and ourselves to be infallibly right.

Let us take our heads out of the sand and put our feet in the shoes of Northern Ireland supporters for a moment. Not all Northern Ireland fans who object to a single all-island team can be simplistically characterised as “violent bigots”.

There exist reasonable Northern Ireland supporters too, believe it or not, and most will simply say that they wish to maintain their team as a symbol of their distinct (Northern) Irish identity or as a means of emphasising it. They are entitled to emphasise their identity, which tends to be a regional, sub-national or supplementary British one, just as we Ireland supporters are entitled to emphasise our independent or island-wide national one.

If Ireland supporters really aspire to seeing the creation of a single all-island state and/or team, we ought to refrain from pontificating, making expectant judgments or complaining about those who do not adhere to our national ideals. Commonality cannot be enforced involuntarily; to attempt to do so would be distinctly illiberal. People are more than entitled to disagree and dissent without fear of potential moral or legal coercion. There is absolutely no obligation upon Northern Ireland supporters to conform to our desires.

Instead, it is we, if we want people to agree with us, who must assume the challenging burden of convincing dissenters of the merits of our position. We nonchalantly expect only them to make steps towards compromise, as if that is the way it simply should be, but do we or would we impose upon ourselves the same expectations in reverse? Would we be willing to compromise in order to ensure Northern Ireland supporters would feel welcome as equal participants under the flag of a single, all-island team? If we would, just how far would we really be willing to compromise?

If we Ireland supporters were asked to (re-)join some single hypothetical UK team, would we ever tolerate being dismissed as “violent bigots” for objecting? Of course not. We would say, just like Northern Ireland supporters do when asked about their interest in a united Irish team, that we simply wished to preserve our own independent identity.

Indeed, Northern Ireland supporters might even be open to the idea of a single, united team within a hypothetical future scenario whereby the southern state on the island would re-enter the UK.

Or perhaps they would warm to the idea if we were willing to relinquish our symbols and identity by subsuming ourselves into their team and operating out of Belfast, but how many Ireland supporters who lambaste Northern Ireland supporters for refusing to accept unity on our terms would be prepared to even begin to consider accepting it on their terms?

It takes two parties to fail to reach a compromise. As such, we must properly understand and appreciate the situation and objections with which we are faced if we want to find a solution to what we – and only we – view as an outstanding issue. If compromises of the nature of those outlined above would not be palatable to our senses, perhaps we need to re-evaluate our assumptions and spare Northern Ireland supporters our sanctimony lest we be guilty of gross hypocrisy.

It is worth noting that we who support the FAI’s team have a de facto all-island team at present anyway; northern-born Irish nationals are fully entitled to opt to play for Ireland if they wish. In light of this reality, Northern Ireland supporters perceive talk of a single all-island team to be blindly ignorant at best and maliciously provocative at worst; essentially, for them, it amounts to talk of the abolition of their team and represents a desire to trample upon a cherished symbol of their identity.

It is also uncertain as to whether or not two jurisdictions would be permitted by FIFA to combine to form a single team under current rules (or without some form of special exemption), even if there was will there.

I would endorse a single, united team in principle for the reason that I support the honourable and historical ideal of civically and independently uniting the whole island of Ireland and its people of all identities, backgrounds and faiths – be they Irish, Northern Irish, British, Gaelic, Ulster-Scots, Anglic, Catholic, Protestant or other – but I suspect that reaching an agreement on ending political partition will be de facto and de jure a prerequisite.

Those of us who espouse such an ideal and who hope for others to acquiesce really ought to get our creative thinking-caps on instead of automatically expecting compliance and demonising naysayers when our presently-unreasonable and unrealistic expectations are not entertained or taken seriously.

If we want unity, it is our responsibility to persuade unwilling others of its merits. On the other hand, if we do not want it or are content without it because we would rather not compromise on our own identity and its symbols, that is fine, but I think it rather disingenuous to then try and apportion blame for any impasse upon “sectarian” or “uncompromising” Northern Ireland supporters who, by and large, only wish to maintain their team for the very same reasons as we do ours. Does that make us bigots too?

The above piece is published here on Daniel’s blog. Its theme was also discussed in a previous article Daniel had written, entitled ‘North Men, South Men; Comrades All!’, where he analysed a panel discussion at the 50th plenary session of the British-Irish Parliamentary Assembly last February.