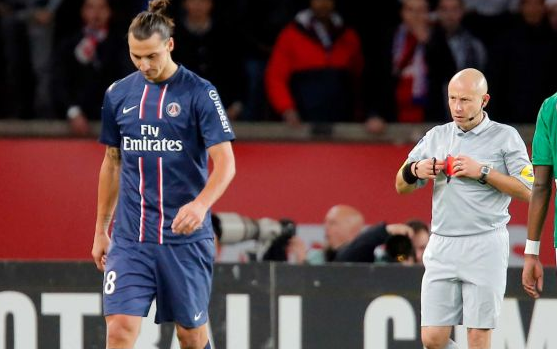 Ever since Carlo Ancelotti took charge at Paris Saint-Germain there may have been constant question over his team’s style and ability, but in all the criticism the Parisians hadn’t tasted defeat at home in over a year. This weekend Saint-Etienne arrived in the capital to change all that.

Star striker Pierre-Emerick Aubameyang picked up a blow mid-week and would start the game from the bench, he would be joined by the impressive Renaud Cohade on the sideline as Christophe Galtier started with a game-plan, to frustrate PSG and hit on the break.

For 50 minutes the plan worked perfectly. Moustapha Sayal Ball was playing the game of his life in defence against the iconic Zlatan Ibrahimovic and les Verts were playing the better passing football. Not fully fit, Aubameyang would make his appearance, and the impact was instant. Breaking down the left wing, he clipped a cross in looking for Brandao, the ball would find the legs of Mamadou Sakho and loop past Salvatore Sirigu in the PSG net.

With the Parc des Princes stunned, it would get a lot quieter in the coming minutes. Chasing a ball played over the top Ibrahimovic would try and play the ball over Stephane Ruffier’s head, but only ended up giving the French ‘keeper a karate kick to the chest. Referee Laurent Duhamel had no choice but to show the Swede a straight red, an automatic one game ban, but expect the LFP to extend that to at least three.

Misery turned to despair with the next attack, substitute Alejandro Alonso broke free through the centre and had the easy task of squaring to Aubameyang free in the box, the Gabonese international took a touch and prodded the ball past Sirigu. Amazing Saint-Etienne had only ever won twice at the Parc des Princes in 42 years, despite a late goal from Guillaume Hoarau this would be their third. The best team took all three points, the home side with some thinking to do. They will possibly have to play three games without their top scorer, let’s see them shake off this tag of being a “One-man team”.

All eyes will now turn to Carlo Ancelotti, what can he do with this squad that has cost in excess of €250 million to put together? Will he dare move away from his preferred midfield three? Can he trust a forward line of Kevin Gameiro and Guillaume Hoarau? In the next month we are certainly going to find out.

Outside of the big Swedish striker the midfield had actually been one of PSG’s huge strong points so far this season. No one expected Marco Verratti to play this well so quickly. The 19-year old had never played a game at the top level, moving from Pescara in Serie B to the French capital should have been a huge step, but he has took to the French game like a duck to water. Spraying balls all over the pitch and barring long hair and a lumberjack beard he certainly looks like the next heir to the Andrea Pirlo crown.

With Verratti playing in the deep lying playmaker role a lot of credit has to go to the players either side of him, Clement Chantome and the very impressive Blaise Matuidi. Matuidi has the very rare tag of being a player bought by PSG from within Ligue 1 and after a disappointing first season, he is finally showing the promise he gave us all a glimpse of at Saint-Etienne.

Continuing to break up their opponents play with a mixture of power, intelligence and enthusiasm he has now added an attacking flair to his play. Bursting forward with the same sense of freedom that Clarence Seedorf used to do game after game for Ancelotti’s Milan. All Matuidi needs to do now is add some goals and assists and he could became one of Europe’s premier midfielders. The future is definitely bright in the Paris midfield.

The problem and PSG are going to discover this very quickly, is upfront. Kevin Gameiro needs a partner, and Guillaume Hoarau is no Ibrahimovic. Given the right support the two could work together quite well, but it does mean dropping either Jeremy Menez or Javier Pastore from the starting eleven, both have been playing well as of late, so it would seem foolish to go without two of your best players to accommodate two inconsistent forwards.

This riddle could be answered by Ancelotti going back to the striker-less formation he touched on at times last season. One problem with that move will be the current injuries to both Brazilian Nene and Argentine Ezequiel Lavezzi. Either would be ideal to play in a front three, Lavezzi could be fit enough for the bench next week, and should be back before Ibrahimović’s ban ends.

Some big decisions for Ancelotti in the next few weeks, decisions that could make or break PSG’s assault on this year’s title and after losing the title to Montpellier last season, surely failure this season would not be tolerated.

They say that no one player is bigger than a club, in the next few weeks Zlatan Ibrahimovic could challenge that saying. It is up to Ancelotti and the rest of his players to prove it otherwise.