The concluding part from our visit to White Hart Lane for the Europa League game between Tottenham Hotspur and AS Monaco game, you can read the first instalment here.

The one thing that sticks in my mind the most about my first match, was that walk up the stairs, at the top beyond the barriers and stewards, you see the brilliantly bright green pristine pitch, the blue and white seats, the columns of the east stand, all the features that were then so new, but now all wonderfully familiar. 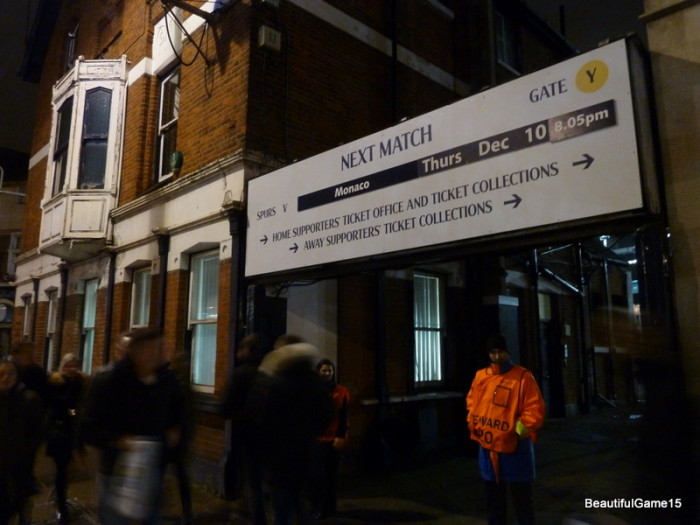 A large Europa League emblem covers the centre circle, the continuous rain has pooled on top of it making the jobs of the people who have to lift it up and shimmer it that little bit harder, I imagine.

Their cue to do so is the beginning of the montage of all montages played just before kick off, footage of glory days past, voiced over by Roger Lloyd-Pack, Trigger from ‘Only Fools & Horses, “we are about playing with style, we are Tottenham Hotspur”.

Not content with one stirring video, a second shortly follows, this one is less Jimmy Greaves, and a lot more Harry Kane. At one point a player featuring in it has a Terminator style eye not in an unacceptable red, but a much more agreeable shade of blue.

As the teams are read out, “Hugo, Hugo, Hugo” Rachel is happy to hear that “Son is playing” she has turned into quite a fan. THFC are all in white, and as the players set themselves, handshakes and coin tosses over, there is a brief exchange between the small contingent of AS fans, who are out numbered by stewards and mostly all standing in the first few rows of their block to our left, and the THFC fans here are part of the 1882 movement, standing to our right.

Started by the Fighting Cock Podcast @LoveTheShirt, the 1882 ethos of ‘Love The Shirt’ rings true with many fans, who have grown weary of the diminishing atmosphere, the lack of singing, not only giving their support for the first team, but all levels of the club.

The blocks they occupy for games are always quick to sell out, even watching at home, you notice the rise in decibels when they are present.

Normally the tireless job of one steward to tell a few 100 if not thousands people to “sit down”, the usual instruction is conspicuous in its absence, and without it, the whole of the South Stand around us is on its feet. A roar goes up on the whistle “COME ON YOU SPURS”, “COME ON YOUR LILYWHITES” and the singing from 1882 starts, “everywhere we go”. 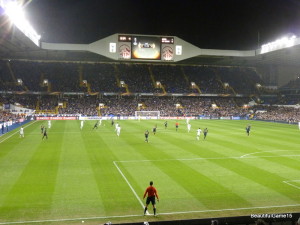 The corresponding fixture, in the near empty Stade Louis II stadium, saw THFC go ahead, only to be pegged back by a late goal for a 1 – 1 draw. Early on it seems unlikely to be a similar result, THFC are creating chances with ease, and after just two minutes Erik Lamela scores, “Yiddo, Yiddo, Yiddo, Yiddo”.

My view is from the aisle, and not my seat, as I let a late comer into our row, only for him to be back again before the players have stopped celebrating because he was in the wrong seat.

“It’s going to finish 1 – 0 now” says one fan to another, walking to their seats. The early goal not inspiring thoughts in him of a goal fest, but that he has seen all he is going to see, and it will be 88 minutes of sideways passing, luckily for us all, that could not be further from the truth.

Hands are raised, fingers begin to wiggle, and my favourite chant begins “Oh when the Spurs go marching in”, but not quite to my liking. I think it’s best when it starts slow, painfully slow, treacle slow, building up as it goes, drawing more and more people in, until it’s a wall of noise.

When it’s sung in full flow, there is nothing quite like it, it will bring a tear to the eye of any football romantics like me.

Lamela strikes again, this time with a little help from the AS keeper, the fans again quick to offer their assessment of his performance “dodgy keeper”, the Argentine’s shot is not particularly fierce, but the keeper lets the ball go under him. A father and his small son high-five in front of us, he is forced to stand on the seats, watching between the heads in front of him.

One fan close by celebrates the second goal by waving his fist and mouthing swear words at the handful of away fans. Unjustifiable anger distorts his face, he has the look of someone readying himself for war, and looks close to bursting a blood vessel or three, he might want to consider a prescription of ‘chill pills’.

It’s not only the substitutes warming up, the fifth official standing on the goal line, goes through a routine of squats and jumps, and when Dele Alli jogs our way, he is serenaded with “oh Dele Alli, oh Dele Alli, knees bent, arms stretched, rah, rah, rah”.

Some other players are demanded to wave, most oblige, Nacer Chadli is a little more hesitant, but eventually caves in.

Despite their number and the on field display the AS fans sing, even trying a ‘Poznan’ for a brief moment. One topless fan, and one in a pink bucket hat, stand at the front, taking turns trying to whip up the crowd.

On 35 minutes the hat-trick is complete, an interception in midfield, and pass into the run of the forward, sees him bury it from just inside the box “Everywhere you go, always take Lamela with you” to the tune of the Crowded House hit, rings out from block 35. 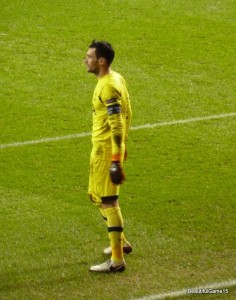 Behind us our THFC very own Beavis and Butthead, whose topic of conversation range from exactly where is Monaco, how prepared one of them is now for a pitch invasion, because his new phone has a selfie setting, but most damning of all is a question one posed to the other about a friend “does he like coming to Tottenham anymore, or does he like watching it at home?”. SIGH!

The elongated number one on the jumbotron, which looks like a seven, signals the amount of extra time that has been added on, to what has been a routine but enjoyable first 45.

Normally people take the break to stretch their legs, after being sat for nearly an hour, but the fact most have been standing, means the opposite occurs. Instead though of being able to use the break in play to discuss the intricacy of the 4-2-3-1 or the value of a ‘False 9’, a scene plays out in front of us, between the Son and Father who celebrated the first goal together, that is enough to make you want to curl up in a ball and cry.

It would seem Daddy’s Highland Spring water bottle, had a bit more in it than your finest Scottish spring juice, and by halftime he is wrecked. We have all seen people a little worse for wear, I once saw a man be sick in a bush on the way to Craven Cottage on Boxing Day, as his family watched on, but this fella was in charge of a child.

Perhaps slightly more worryingly he had started to become a bit handsy with women around him, in particular a young blond woman, whose hair he found particularly fascinating.

Perhaps saddest of all was watching his Son, trying to tell him to rein it in, not a sight you ever want to see, the position of responsibility thrust upon him, because Daddy can’t hold his shit together. Such were the concerns of one Mum, there with her own family, and who had been forced to move seats, because of his advances, the stewards are eventually called over, and the man and his Son are removed from the ground, thankfully with no resistance.

The tune of ‘McNamara’s Band’ playing clears my mind slightly, as I try to forget the horror of half time as the team’s reappear and Lloris approaches,“Hugo, Hugo, Hugo”. Someone near us makes a blunt, but accurate assessment of AS “they are shit now, I’m told they were a very good team last year” just proving when all the money is pulled out, as quickly as it’s put in, and what a deflating effect it can have on a team.

THFC have eased off to say the least, although when Rachel asks “have we switched off a bit this half” they almost score, but on 61 minutes it’s not a huge surprise when AS grab a goal. When the away fans celebrate, “Monaco, Monaco, Monaco” the fans around us are quick to reply “we forgot that you were here”.

It’s always an anxious time for the typical THFC fan flying with a three goal lead, conceding to a lesser opposition and conjuring up thoughts of Manchester City in the FA Cup in 2004, letting a three goal lead slip and after the final whistle blows, will everyone be able to relax. 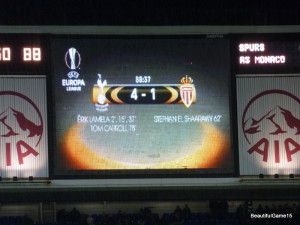 In the home end the high-pitched voice of one child, is the font of chants “what do we think of West Ham?” the fans reply “SHIT”. He is encouraged when someone shouts to him “give us a song little man” and Rachel quite rightly asks me “do we have children as Capos?”

“Can’t take them, can’t defend them” is one person’s analysis of THFC at corners, after AS look close on a couple of occasions of taking advantage of this, but on 85 minutes Tom Carroll cements the three points.

Dancing through the box, for a moment embodying the soul of Ricky Villa, he pokes home a truly lovely goal, Villa departs, but was with him long enough that he has scored the best goal of the night, “Yiddo, Yiddo, Yiddo”.

Walking to the bus stop, the rain has not relented, I notice an Arsenal FC sticker on a lamp-post and can’t believe it’s there. Also for the first time I see the glowing white monolith that is Lilywhite House, towering above all around it, the clubs new administration building, looking like the headquarters of Marvel super villain.

Changes will continue, and Christ a lot has changed in the short time since my last visit, and a lot more will before THFC are playing in the ‘Lidl Arena’ or ‘Miss Selfridge Stadium’, along with the NFL’s newest franchise the ‘London Beefeaters’, when we will swapping the crossbar for field goals, and a bit of ‘gridiron’ action.

I’m not even sure how many more visits I will get before the familiar is no more, and like so many others we will all have to start again when we move house.

Is it the bricks and mortar that make a home? Is it the memories made there? Or is it the people who live in it? The move is inevitable, we will have to wait and see, a lot will happen between now and then, players and managers will come and go, seasons will start and finish, games will be won and lost, but one thing is for sure, there will never be anywhere quite like White Hart Lane.