“I’m off to White Hart Lane, to see Tottenham in the Oxfam Cup” says the long-haired, hat wearing, Ray Mears extra in front of me, as I get on the bus from work.

Recent trips to the N17 area of North London, have been to visit the totally awesome Haringey Borough FC. A team at the opposite end of the football spectrum to Tottenham Hotspur FC (THFC), and one I’m sure many fans have passed, just like I had, but have never been in, but you really should I cannot sing their praises enough. 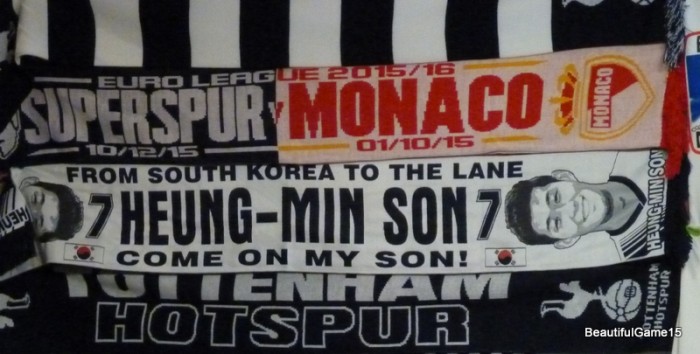 Tonight however will be my first visit of the season to a place I first visited back in 1996. I subsequently went on to become a season ticket holder, but am now reduced to visits thanks only to the good graces of friends, Christmas and birthday presents, or when tickets are at a reduced price, like tonight’s last group game of the Europa League.

Already qualified, but with the group still to be won, the prize of avoiding the Champions League dropouts, for now at least, is still on offer. Standing between THFC and the chance to miss the likes of Valencia CF or FC Porto in the next round, are the visitors from the car park, the Principality team of AS Monaco FC (AS). 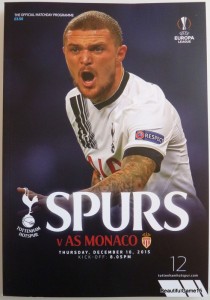 Coming out of Seven Sisters station, my night nearly comes to a premature end, when I’m almost run over by a man on a hoverboard, who is courteous enough to shout at me to inform me of his imminent arrival, expecting all pedestrians in his way to step to one side, because his floating sedan chair is coming through.

Not normally making my way to games this way, I forget about the circus that is catching a bus around here, the combination of rush hour and swelled numbers because of the game, has sent one driver into near meltdown, telling people to get off, get on, trapping a few people in the doors as he goes, causing a tailback of five or six buses long.

I’m relieved to hear the next stop is “Tottenham Sports Centre”, the short bus ride has been spent cheek to jowl, and once off it’s nostalgia overload. We have been to a lot of football over the last year, visited a few biggish grounds, but the vast majority have been non-league.

The grandeur and the sheer amount of people, the rows of police vans, and horse mounted coppers, that all comes with a top flight fixture, are almost a shock.

The generators of the tarpaulin roofed stalls hum away, illuminating their eclectic mix of tat, pointy foam fingers, flags, scarves with new summer singing Son Heung-min’s face on or the much discussed ‘half-and-half’, one batch has a bit of a typo, “SUPERSPUR”.

Steam rises from the hot plates of the various burgers vans. “Follow the smell of the onions” says a man to a child whose hand he’s holding as they cross the High Road. Small groups of people already committed to dinner standing up are huddled around, slightly hunched over, digging into God only knows.

Tom has conveniently had to “work late” this evening, his Arsenal-ness perhaps making him prefer to slave away, rather than go to a THFC game. Tonight then will now be the continued adventures of ‘One Man And His Fiance…….’, and with some time to kill before her arrival, I pay a visit to the official club tat shop, with its slightly more permanent roof.

Inside it’s hard to make your way down the aisles for people considering ‘cockerel cufflinks’ or a ‘Spurs cat bowl’, my head is turned for a second by the Christmas baubles, but refrain, wondering if I would even be able to take them in the ground, as they would make a pretty nifty missile.

The section selling Ledley King’s book ‘King’ makes me stop, and I bow my head in respect to the omnipotent honeycombed kneed one, posing on the front cover, hand on chin, deep in thought. Seeing him always reminds me of the impression my other half does of me, screaming his name like a ‘One Directioner’, from when I watched his striding, effortless all too short playing career, making that tackle against Arjen Robben, “LEDLEY!!!!”

A low rumble, quickly turns into a certified racket as a group of AS fans, maybe 30 strong, dance, sing, shout and wave flags, as they make their way to the South stand. Snaking through police fans, the nearby officers stay static, their low number, and good nature, mean it’s not really worth turning their heads to acknowledge. 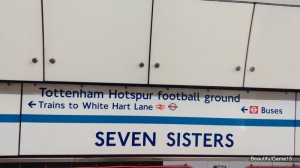 One of the pre mentioned friends, who gives me first dibs on spare tickets, and the very same person I stood through the agony and ecstasy of the 3-2 win at The Emirates in 2010, a season ticket holder himself, Matthew is meeting me pre game for a catch up.

Our usual haunt, the Haringey Irish Centre, seems too far away, and considering it’s a school night, a cup of tea and a wall to lean on will suffice.

Although Tottenham High Road is in a major state of change, perhaps the biggest since White Hart Lane was built, there are a few surviving landmarks, but some have been lost in the wake of progress.

Gone in their own mysterious, smoke shrouded way are the small family businesses, gone is the red brick Salvation Army building, where the band would play at Christmas, saddest of all though, gone is the gate on Bill Nicholson Way.

The Stonehenge of N17, the immovable Valentino’s is still there, as is, still nestled on the corner of Park Lane, Jacks Cafe.

Such are its ‘Shire’ like dimensions, a thick blanket of steam hugs the ceiling, and conscious I’m not far from touching it with my head. It almost has it’s own micro climate, and has gone from December cold outside, to Manaus hot inside.

The man behind the counter pretty much tells us we are having “takeaway” as we only order a cuppa, and not a large plate, of whatever the other people are eating in the long narrow cafe. 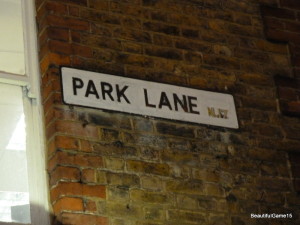 Much like the AS fans arriving earlier and making just as much noise, but only smaller and younger, two single file rows of hand holding children arrive, watched over by nervous looking high viz waistcoat wearing adults, making sure not to lose one.

Matthew is quite right in saying it’s “brave taking kids to a football match for a school trip”, but it beats the science museum for the 49th time.

Rain is now steadily falling, and when Rachel finally arrives, I’m ready to go in, but not before she tells us both about the guys on her tube journey trying to get a Pochettino song going to the tune of ‘supercalafragalisticexpialadoshus’, from Mary Poppins.

Mauricio Pochettino, he has a bit of whisky in his morning cappuccino, and he’s better than Mourinho, dum dilly dee, dum dilly da.

We say goodbye to Matthew, and take the short walk to the 1950’s sized turnstile, it’s a bit of a squeeze and my mind does briefly flit to thoughts of the Fire Brigade and the jaws of life, but we are in, just. Beyond there is nothing of much note, just white walls and a few kiosks.

We go in search of the blue round sign suspended above each small flight of yellow steps to their respective blocks, and quickly find ours, “36”.

Find out all about the rest of our night under the lights at White Hart Lane in Part 2, on the website tomorrow.