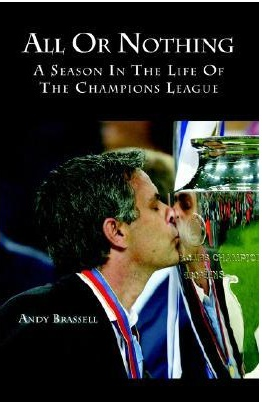 Any time a person risks being fired for a football match chances are it is pretty good match. Last week millions of people all across the globe will skipped, took longer lunch breaks, and missed dinner with their spouses to watch the UEFA Champions League.

As a tournament it is only rivaled by the World Cup in terms of its reach and popularity. But why is this tournament so important? It is a question that Andy Brassell looks to figure out in All or Nothing: A Season In the Life of the Champions League.

At the beginning of his book, author Andy Brassell asked a very simple, but difficult question: What does the Champions League mean? Beyond just the question of whether this is the greatest football tournament in the world, a question that seems to dominate soccer forums and blogs, it seems what is he really asking is what does this competition mean for Europeans, for the clubs playing in it.

By digging up the history of the tournament and the culture that each player, supporter, team, and league brings that we find the true joy of the Champions League.

As an American, the UEFA Champions League means something different from what it might mean for a European. As a kid growing up, getting the chance to watch the UEFA Champions at 3pm after school was like Dorothy going from a world of grey to colour in the Wizard of Oz. It was a kaleidoscope of players, talents, cultures, and personalities that there was a bigger game out there and that the implications of each match were far-reaching.

Brassell looks to find the answers to these questions by traveling all throughout Europe during the 2012-2013 Champions League season. In his travels through France (Lyon, Marseille, and Saint-Etienne) Germany (Borussia Dortmund and Bayern Munich,) England (Chelsea, Leeds, and Manchester United,) Italy (AC Milan and Juventus,) Monaco, Portugal (Porto), Spain (Deportivo La Coruna, Real Madrid, and Real Sociedad), and Scotland (Celtic) he acts as a sort of fly on the wall, talking directly with local journalists, supporters, and players to get an idea of why this tournament matters so much.

Of course anyone who has ever listened to Andy on BBC’s World Football Phone In or the sorely missed ESPN UK Podcast or read his work in The Independent knows that he is a walking encyclopedia of European Football. But the Champions League was started during an interesting time for English football (post-Heysel and the five-year ban) and there was almost a reset in its relevance.

It is from this perspective that Brasell can use a unique lens to look at the tournament, that of a person seeing matches in Europe for the first time. Although the game isn’t new for him or likely many of the readers of this book it is a fresh take because it explains as if this was your first time hearing about Porto or Leeds or any number of teams. If there is a method to finding out this tournament truly means, Brasell found it.

It is an interesting concept, but a necessary one. UEFA with all of their glitz and media packages has almost glossed over what is most important about the Champions League: its history and its role in developing the European and world game. Brassell alludes to this when he says that:

It is the history of European football that Brassell seems to be looking for in this book and he seems to find it in places like Saint-Etienne. Brassell’s story of the history of Allez Le Verts, one of the theme songs of Saint-Etienne shows his strength as a writer using humour as a means of enlightening the reader. When talking about the song he marvels that:

It is pretty much alone in the murky world of football records in that a.)it isn’t a total laughing-stock (in fact it’s pretty damn fine) and b.) was a genuine hit.

Of course what also makes the Champions League so fascinating to watch, aside from the play, are the characters that surround the game. Brassell gives all of football’s heroes and villains due course in this book, but perhaps the most vivacious character that he runs across is Jose Mourinho.

At the time of this book, Mourinho was not the “Little Horses” coach who was driving Real Madrid supporters mad with his frenetic behaviour. 2003-2004 was his second season professional season with Porto and having brought the club back from some difficult seasons.

The man who would become Mourinho was on full display in the post-match press conference of Porto’s second round defeat of Manchester United. Press conferences can often be quite boring with coaches and players reciting the same diatribe over and over again. But Brassell covered Mourinho perfectly saying that:

Mourinho offered in a deadpan expression that he too would be upset if his team had been taught a lesson by a team which ‘cost a tenth of the price’ This guy really had something to him.

There were also allusions to the problems of current day football with economics obviously being a huge theme throughout the book. This is perhaps no more clear than with Leeds United. A team who has a rich football history, the club started to really fall apart (at least in a fiscal sense) right around the time that this book was being published. Of course after Leeds fall from grace, there were the likes of Malaga and Glasgow Rangers that have had their own bottoming out period.

It would be interesting to hear Brassell’s perspective on the idea of foreign ownership, not only within in the Premier League but in greater Europe as well. As someone who seems to be in favor of different players from different countries and cultures playing with one other it would be fascinating to hear his perspective if football business can have the same attitude.

Aside from Chelsea’s Roman Abramovich, Brassell doesn’t really touch on the subject. But this was also before the rise of foreign ownership in the European game so it is not something that was as widespread as it is now.

It is amazing the impact that the UEFA Champions League has had on the game of football, but also our global culture. It has inspired children, adults, and even whole confederations to follow and emulate it.

“Andy Brassell’s All or Nothing: A Season In The Life of the Champions League” shows us these things, as well as football’s problems and in turn shows why we love this tournament: because of the characters, because of the play, and most importantly the joy that it gives us.

Outside the Eighteen is a monthly book review series aimed at looking at the game from a different perspective. Have a book that you would like to review? Let us know!