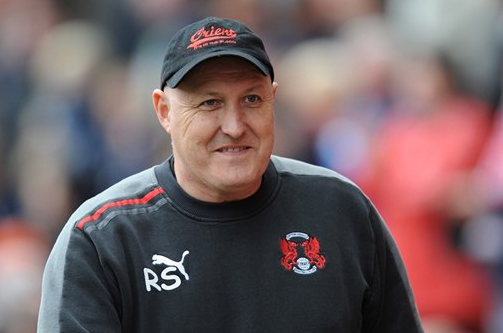 Russell Slade claims never to have paid a fee for a player in twelve years of football management. But then the Leyton Orient manager comes from unfamiliar stock. He is one of the abstract few to have been trusted with the reins of a club without having ever gotten his boots dirty to make a living and so it’s perhaps unsurprising that Slade views the relationship between money and the game through a prism.

Modest success in the Football League has been milked from slender resources and those who have played under his charge attribute his success to an unerring knack to make personal connections quickly and manage from a position of fraternal accord rather than with financial clout. Players invest energy and emotion in Slade and his management style chimes with old Corinthian values. But the winds of change howl around East London. As the game creaks under the weight of mammoth investments from above ripples are being felt ever deeper down the Football League. As Orient get dragged into the ongoing dispute over the city’s Olympic legacy the stakes are being raised and Slade may yet find his priorities challenged by the immediate needs of his current employers.

Following the High Court’s backing this week for the London Legacy Development Corporation’s (LLDC) decision to award tenancy of the Olympic Stadium, situated firmly in Orient’s catchment area for regular support, to West Ham the final glimmer of hope that a major football force might be kept off of Orient’s territory on match-days seems to have been extinguished, leaving Slade and chairman Barry Hearn to start planning seriously for a future that might well hinge on the O’s capacity to match the pulling power of their near neighbours. The legal battle now looks to be over but the fight to remain competitive as a business is only just beginning.

A league season that has begun with eight consecutive victories however has provided a platform for a promotion challenge that could yet prove felicitous in its timing. If Orient hope to go toe to toe with their Premier League rivals in terms of supporters through the turnstiles it’s imperative that the gulf in the quality of football on offer be kept at a managed width, or else the decision over where to spend their money on a Saturday afternoon will be made all too easily for most fans. The Hammers’ move is still some two years down the line but early ball park figures coming out of the club suggest family tickets could go for around £40 at the Olympic Stadium – as little as half the asking price for an equivalent afternoon out at Brisbane Road. Manager Slade, with a knack for squeezing blood from a stone, is looking more and more like Hearn’s secret weapon in the on-going resistance to the brutal advance on the Eastern front.

But the former Yeovil manager may yet find himself surrounded by hostile forces and cut off from the relative safety of the low-budget, low risk marshlands. A bold gesture, tantamount to a major financial gamble on securing regular Championship football, may be necessary to keep the O’s afloat in West Ham’s pond and the subtle spending approach that has defined Slade’s first decade in the game may have to loosen the bite of its austerity.

Not to suggest that a pig-headed commitment to old-school thrift will be an obstacle to the Orient manager. One doesn’t notch up such a solid CV as Slade’s without a happy knack for adapting to constant change in a volatile and chimerical industry, and the reviews from those who have experienced his man-management first had are glowing: “I hung in the back of the dressing room at the end of the Colchester game while he was talking to the lads” lauded Hearn after the recent game against Port Vale. “The hairs on the back of my neck went up and I began to understand how he has put together this team spirit. You could cut the atmosphere in the dressing room with a knife but the feeling was a beautiful moment in sport.”  No small praise from a man who has spent a career in the bombastic atmosphere of professional boxing. But in Slade Hearn looks to have found someone to fight his corner bullishly, battling against combative fiscal limits to pound out a brighter future for the club he has led for nearly twenty years.

As for Slade’s record Orient fans have every reason to believe the club’s explosive start to the season isn’t just a flash in the pan. Prior to the minor miracle he achieved in guiding Yeovil to within a play-off final of the Championship there have been similar near misses at Grimsby and Scarborough when resources were stretched, and all the signs are promising that a first promotion could finally be in the offing for a man who manages with his head and with his heart rather than his chequebook. If it happens – and with 38 league matches still to negotiate that’s a big if – Slade and Hearn will be entering unchartered territory, where their capacity to lead will have to clear new fences. West Ham and the Olympic Stadium will be the most cumbersome obstacles to hurdle but if the pair can adapt their club quickly the Hammers may yet find they’re not the only star attraction in East London.

One thought on “Orient Express”