The Dutch are one of the big favourites for the World Cup, and Liam Stoker takes a close look at the tactics employed by the men from the lowlands. 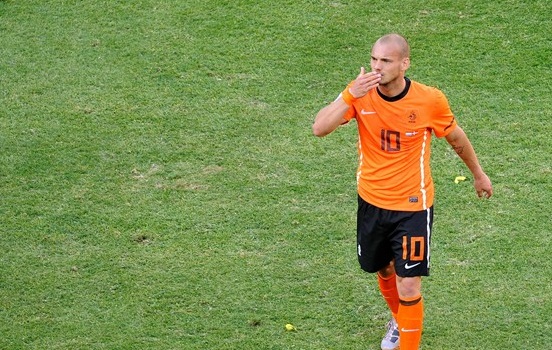 Holland enter South Africa very much in form and widely fancied as an “outside contender” for the tournament this year. The effervescent brilliance that is so often associated with Dutch football is only enhanced by a tactical system that exploits every strength they boast.

The Netherlands line-up in what is essentially an adaptable 4-2-3-1 with two “water-carriers” responsible for defensive duties in midfield, allowing the three more advanced midfielders to express themselves without the necessity to track back and, in Wesley Sneijder, they have one of the best attacking midfielders in the World.

As pivotal as Sneijder is, the two men either side of him are of equal importance.  Usually adopted by Liverpool’s Dirk Kuyt and Bayern Munich’s Arjen Robben, they act essentially as inside forwards rather than the more predictable attacking winger role. Kuyt’s industrious working of the channels is a constant thorn in the side of his marker and his equal ability with either foot, especially in this particular role, can be used to pull defenders out of position.

Arjen Robben, the ying to Kuyt’s yang, compliments his colleague perfectly utilising his abundant pace and trickery to scythe through the opposition in a more direct manner, fashioning either a shooting opportunity for himself, or dragging defenders away from the striker or approaching midfielder. Waiting in the wings to replace either is the sprightly Eljero Elia, a young player very much in the Robben mould and one who particularly impressed in their warm-up fixtures.

All three members of this advanced midfield trio have proven themselves to be potent goal scoring threats, as shown in their remarkable qualification campaign and unbeaten run stretching the last nineteen games, but the understanding they share with Robin Van Persie is where the true strength of this tactical system lies. 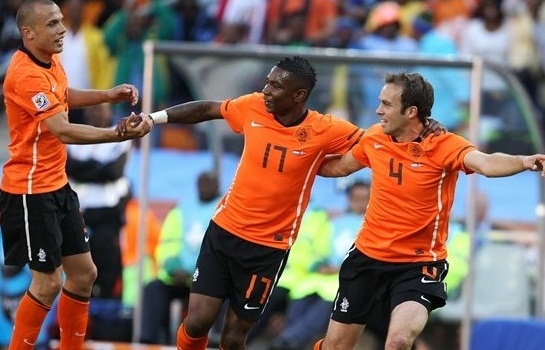 By adopting a lone striker system, it would be all too easy for the midfield to lazily choose a more direct passing regime and plump for lofting balls over the top for Van Persie to chase tirelessly. Let’s label that the Steve McClaren approach. The Netherlands, on the other hand, rarely adopt such an approach and instead play a far more balanced game, relying on the intricate-yet-basic pass and move. With so much emphasis of international football based on possession, it’s quite evident why Holland are favoured so strongly.

Unfortunately for the Oranje, their weaknesses are as plain to the eye as their strengths. With a defence that doesn’t exactly convey an image of strong and resolute, Stekelenburg could be in for a busy tournament. Giovanni van Bronckhorst will pick up his 100th cap against Denmark in their opening game of group E and his experience could prove absolutely vital, as Heitinga, Mathijsen and the largely untested Van Der Wiel will need all the guidance they can get against some of the better, more attacking minded nations in South Africa.

This weakness causes the two more central midfielders to shield their defence and the pairing of Nigel De Jong and Mark Van Bommel should, in theory, provide enough numbers to paper over the cracks that could appear. This, however, could cause more problems on its own.

The fact that this midfield is prone to splitting into “defensive” and “attacking” factions with very little blur between the two leaves the Dutch open a strong, narrow midfield, such as the one deployed by Italy, maintaining the bulk of possession and alienating the attacking element from any distinctive service.

This system also calls for a huge amount of resilience from Robin Van Persie. The Arsenal forward does have a tendency to go in search of the ball, dropping deep or into the channels to receive possession and springboard attacks. Holland already have Sneijder occupying the space behind him and the two inside forwards working the channels so Van Persie’s presence in either of these positions is likely to clutter the play and disturb any attacking move.

It’s a system that is expertly deployed by the Dutch and one that certainly masks the weaknesses they may possess in defence, as well as enhancing their strength of having a number of dangerous players capable of wreaking havoc for the opposition in the space just behind a striker. It does, however, rely on a number of players performing their role to perfection and is certainly one to be watched this summer.