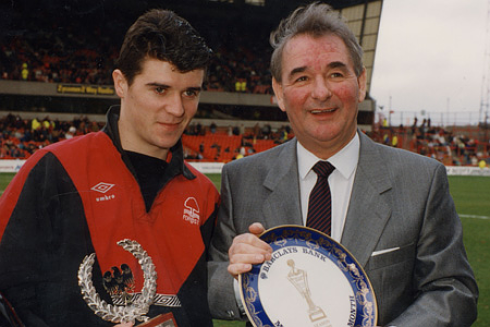 Despite his standing as one of the greatest ever English managers, Brian Clough was never awarded the chance to manage internationally.

Sure, in 1977, he was interviewed by the FA but despite being an anglophile, Clough was deemed too risky, too unpredictable.

Instead, Don Revie was replaced by the placid Ron Greenwood.

England, by contrast, performed dismally at the 1980 European Championships: finishing third in Group B behind Belgium and Italy.

Yet, while one wonders would Clough have bettered Greenwood’s record, to suggest he single-handedly built Nottingham Forest would be wrong.

Rather, Clough formed one half of one of the greatest management teams in English football history with Peter Taylor.

Subsequently, the low points of Clough’s career – 44 days at Leeds in 1974 and relegation with Forest in 1993 – took place without Taylor present.

So, while much has been made of Martin O’Neill and Roy Keane being graduates of the Clough school of management – with both players having had physical run-ins with the Englishman in their respective times at Forest – they knew two very different regimes.

O’Neill witnessed Clough/Taylor at their peak at Forest in 1978-81; Keane saw a Clough who was rapidly, and publicly, losing his battle with alcoholism while still managing to perform decently in 1990-92.

Sure, there are undoubted mutual, Clough traits evident in the pair – namely passion for the cause – but it is O’Neill who felt Clough’s positive influence the most.

From respect for referees and simple tactical/motivational instructions to relishing life as an underdog, O’Neill could be the perfect paternal influence for Keane, who is 19 years his junior.

Keane, after all, has been out of work for two years and while punditry has kept him in the public picture, the Corkman would have witnessed how Gary Neville has simultaneously embraced international football under the tutelage of another football elder, Roy Hodgson.

Thus, O’Neill’s placidity and experience could be the perfect foundations to restore Keane’s standing in the game, with the Irishman having been parachuted into chaos as a rookie at Sunderland in 2006.

Keane, unsurprisingly, proved himself as a fighter and a man with great spirit that season but when it came to the quantum leap of Premier League football and an extended run of management, the Irishman badly struggled.

There was little guidance offered and Keane’s methods and inability to man manage quickly leaked – tarnishing his potential recovery at Ipswich before his reign ever really got off the ground.

Now, a curious challenge awaits and within the confines of just six matches a season, it will be intriguing to see how Keane, in particular, copes.

Sure, without doubt, O’Neill would have loved to have brought John Robertson, the Derryman’s long-term ally, with him as his assistant but Keane is far from a solely symbolic appointment.

Embracing Keane’s honesty and volatility and, at the same time, strengthening the basics of management that Keane seems to lack suggests a new era is on the cards.

Whether that involves O’Neill restoring his own managerial reputation and taking Keane back into the Premier League front line with him in two or four years remains to be seen.

Or, perhaps, Keane may well be groomed as O’Neill’s successor as Ireland manager in that same period.

It could prove a partnership that lasts long beyond what is sure to be an intriguing Euro 2016 campaign for Ireland.