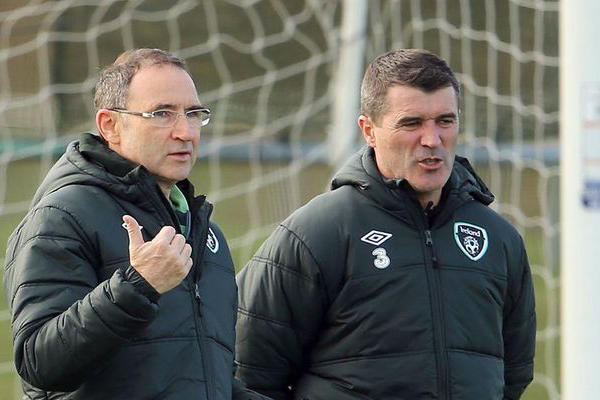 For all the hype and hoopla surrounding the new Martin O’Neill, there hasn’t really been a whole lot to write home about from the opening two games of their reign.

Also, why do people insist on calling it the “MONKeane era”; when Giovanni Trapattoni was the manager, was it called the “Trapdelli era”? I think not. The (mainly Irish) media need to get a grip a small bit. A well known Irish football journalist tweeted over the last few days: “Irish squad went to watch Gravity in 3D this week. Something humorous about the thought of Roy Keane sitting there with the glasses”. I mean, seriously, the man went to the cinema just like everyone else has done many times before, it’s hardly newsworthy now is it?

The clash against Latvia at the Aviva Stadium last Friday night would have been played in front of a less than half full stadium were it not for the fact that O’Neill (and in particular Keane) were the new managerial ticket. Instead the game was close to a 50,000 sell-out. Think about it. That is approximately 25,000 people who went to a match to see the manager (and more so the assistant manager) gesticulating on the sidelines!

And why all this excitement? Martin O’Neill has achieved big things in his managerial career, in particular with Wycombe, Leicester City and Celtic. Keane however comes with a more than questionable track record. Yes, in his first season as manager of Sunderland back in 2006-’07, he achieved promotion to the Premier League by winning the English Championship. That was however having spent almost £100 million on players! A headline in the Irish Independent at the time screamed “The Miracle of Sunderland” in reaction to the promotion. Anyone who thinks it takes a “miracle” to achieve promotion from the English Championship having spent almost £100 million on playing staff knows very little about English football. There was then of course the almost unmitigated disaster that was Keane’s 18 month stint as Ipswich Town manager. Yes, Keane was a top player but does that mean that he is automatically assured of success as a (assistant) manager and that he is some sort of Messiah for Irish football?! I think not.

It would be somewhat understandable were the massively swelled interest and increased attendance down to the presence of Martin O’Neill, but anyone looking objectively at the situation will admit that it’s the acquisition of the former Manchester United captain which attracted the vast majority of the enthusiasm. At Keane’s first press conference as Irish assistant manager last week, there was standing room only for journalists and the media briefing was broadcast live on as many as five different television channels as well as countless websites. Journalists were issued with wristbands which allowed different people different types of access in an almost music festival type atmosphere as hacks hung on every word that fell from Keane’s lips and giggled like giddy schoolgirls – but only of course when they thought Roy would approve of doing so.

And so onto the football. As expected, Ireland were much too good for 115th world ranked Latvia. The Irish side played with a much greater joie de vivre than they ever did (or were allowed to) under Giovanni Trapattoni and played much more openly as well as showing no fear in defending from the front, pressurising the Latvians every time  they got on the ball, including their goalkeeper when he received back passes inside his own six yard box. Ireland recorded a facile 3-0 win over a side ranked almost 60 places below them in the world ranking. If it needed to be said, these Latvians are no world beaters. They mustered a paltry eight points from their ten game qualification campaign for the World Cup and in their last World Cup qualifier they lost 2-0 to a Lithuanian side who lost five of their ten qualifiers.

Then the Irish returned to Poznań on Tuesday night. The Poles are undoubtedly a step up in class from Latvia. However, despite being in with a mathematical chance of qualification for the World Cup in Brazil until the penultimate qualification game, the Poles had a less than stellar campaign overall, finishing some eight points adrift of Ukraine and the play off spots. That compares with Ireland’s tepid campaign which still ended just six points adrift of second placed Sweden. On the night, the Irish gave a similarly energetic display to that put in against the Latvians, though the Irish never really looked likely to win the game in Poznań.

There were of course plenty positives from the trip to Poznań. The Irish players once again played without the lack of fear which crippled so many of their performances under Trapattoni and played with a high line once again, attacking Polish players when they had the ball from front to back and often working the ball out from the back.

Neither the Poles or Latvians are world beaters however. While defeat to the Poles wouldn’t have been a shock,  two wins over these sides would not have been a particularly remarkable achievement. A win for the Irish in Poznań would have been greeted with mass hysteria by (particularly Irish) media. A win for the Poles over Ireland would have made for an interesting media reaction. Would it have been the end of the honeymoon period? The new regime has gotten off to a decent start, but the hyperbole juggernaut needs to be contained. For now at least.