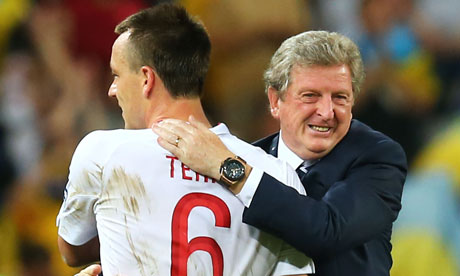 He was never going to go away quietly.

After all, the past 12 months of John Terry’s career have been a desperate low.

From uncharacteristically lashing out at Alexis Sánchez and missing the Champions League final to an “improbable, implausible and contrived” defence in his racism trial, Terry has incessantly sought redemption.

It all dates back to that night in Moscow in 2008, rather than the ‘small’ matters of the Vanessa Perroncel affair or giving unsolicited tours of Chelsea’s training ground in 2009.

Since Moscow, and those tears, Terry has not been the figure of immortality he was once lauded for.

In fact, it was telling that it was ridicule, rather than sympathy, that followed the press and public’s reaction following that penalty miss.

Finding that redemption in Rafa Benítez’s rotation policy, amid the grooming of David Luiz as the leader of the new Chelsea generation, has proved difficult and for an ego like Terry, frankly, humiliating.

This is why Terry has been keen to use nights like the Champions League handover last week, where he refused to shake David Bernstein’s hand in response to the FA’s failure to back Fabio Capello in the run-up to the racism case, to remind the world of his standing.

For a defender who was once, without exaggeration, the most robust in world football, this is nothing short of embarrassing.

Still, the once unthinkable thought that Terry would not end his career at Chelsea and seamlessly continue into their coaching set-up is now a near-certainty for next summer.

The fears that gripped the Chelsea boardroom after Manchester City’s ambitious £40 million bid in the summer of 2009 have long since dissipated.

Roman Abramovich, after all, has little time for sentimentality and this has little to do with Terry’s previous misdemeanors – given that a role model like Frank Lampard is about to be shabbily discarded.

Terry, likewise, is expendable – a figure of lampoonery and ridicule rather than the lionheart and role model that he once was.

Still, it goes deeper for Terry.

A man who has been incessantly abused by opposition crowds for his upbringing – with a mother who was convicted for shoplifting and a father who was a cocaine dealer – there is no doubting that Terry has been desperate to find solace in Chelsea fans’ backing.

In truth, though, the chants of ‘One England Captain’ have dissipated and identifying with Terry and his unpredictable personality of recent seasons has proved more difficult for some Chelsea fans.

Terry, though, is not one to give up and at 32 years of age, rightly feels he has one big contribution left in him.

While traditional Chelsea fans will dream that this would involve José Mourinho returning and Terry hoisting his fourth Premier League title, in 2013/2014, even that seems doubtful.

Mourinho, after all, has not shied from curbing dressing-room influence – as seen with Iker Casillas in 2012/2013 – and even though the Portuguese supported Terry during the racism affair, the pair’s relationship has not quite been the same since they fell out over Terry’s fitness and work-rate before Mourinho’s departure in September, 2007.

Terry knows that, even with Benítez leaving, a new manager will be eternally thankful in not having to deal with the monopoly of dressing-room control that the likes of Petr Čech, Terry, Lampard and Didier Drogba enjoyed under Avram Grant, Luiz Felipe Scolari and Roberto Di Matteo.

Abramovich – a figure seemingly of little rationale – clearly has been shrewd in phasing out the old guard: Drogba in 2012, Lampard in 2013, Terry in 2014 and, potentially, Thibaut Courtois to replace a 33 year old Čech in 2015.

Therefore, the fantasy of the returning fire fighter and representing his country again provides Terry with a sense of belonging that, ironically, he no longer has as Mr Chelsea.

It is a perverse thought, given the tensions – racial and captaincy-wise – that Terry’s England return could herald, but there is no doubting that Roy Hodgson needs Terry for “footballing reasons.”

After all, England’s defence was fragile against Brazil on 6 February and Montenegro on 26 March, with Chris Smalling and Joleon Lescott/Gary Cahill nervy and quiet.

Also, it is telling that Cahill’s best performances for Chelsea have often come alongside Terry, thriving under the marshalling and barking of Terry.

So, while Terry, deep down, is well aware of his flagging attributes – his fitness and weariness of committing to tackles and being turned by attackers – the organisation, presence and mental influence he offers is badly needed by Hodgson.

After all, the perceived other option, Rio Ferdinand – for all the talk of his fitness programme – was quite content to head to Dubai and provide punditry for the game against Montenegro and, quite rightly, has reservations about Hodgson after his handling of the racism affair ahead of Euro 2012.

Terry, meanwhile, is desperate to prove himself – not just to England, but Chelsea too – and given that this is, arguably, the least convincing pool of England central defenders for decades, Hodgson may feel it is a gamble worth taking.

This desperate gamble goes far beyond Terry’s fitness or potential squad divisions for Hodgson as the thought of England having to play a play-off for Euro 2012 would be disappointing enough; the danger of Ukraine or Poland leapfrogging England into second-place would be nothing short of a nightmare.