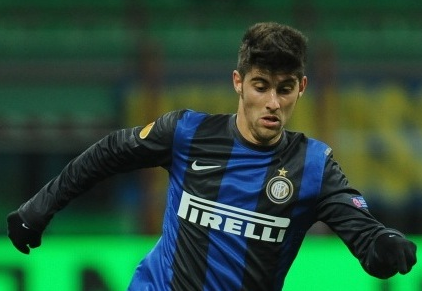 Inter Milan’s young holding midfielder shot to fame after his Serie A debut against Pescara on 12th January. Since then, he’s had to deal with all kinds of media attention, good and bad, and handled both with a level-headedness only associated with seasoned professionals. Benassi received numerous plaudits for his debut performance and coach Andrea Stramaccioni singled the young Italian out for praise. Strammacioni said: “Some people might have frowned when they saw him in the starting line-up but he showed he was up to it and played a great game.”

However, it has not all been plain sailing for Benassi who came under harsh criticism from Italian newspaper Tuttosport after Inter’s 1-0 home defeat to Bologna on March 10th. The paper stated that: “Benassi was frightened by a whistling San Siro. They sent him out into battle, and he disappeared in a context that was greater than he.” The vast majority of Inter fans lambasted the publication and defended Benassi as they thought the defeat was down to a poor overall team performance and not just the young midfielder himself.

Benassi has likened his ability and style of play to that of Esteban Cambiasso and said he looks up to the experienced Argentinian. “Cambiasso is the model I follow on the pitch and during training sessions, not least because he plays on the same position I do.” He claims that while his favoured position is shielding his back four, he is willing to play anywhere the coach and team need him to.

With regards to first-team football and his own development, Benassi has indicated that although he is delighted to be part of the Inter setup and getting the odd appearance under his belt, he may need to move away on loan for regular football.

Another product of Inter Milan’s ever improving youth system and a star of the much touted NextGen Series, Bessa is commonly regarded as the next big thing to come out of Italian football. Born in Brazil but with Italian heritage, the 20-year-old attacking midfielder has all the attributes associated with a South American footballer of his ilk. Small, quick, clever and armed with an accurate right foot, Benassi is the perfect mould for a modern day attacking midfielder. Deemed head and shoulders above his NextGen compatriots, many Inter fans are curious as to why he has not yet been allowed to make the step up into the first team.

Inter scouts spotted Bessa playing for Athletico Paranaense’s youth team and decided to bring him to Italy in 2008. It speaks volumes for a player to stand out so much in what is deemed one of the best NextGen sides and one of the best Inter youth teams ever.

Benassi starred in many of the senior side’s pre-season matches and more than once stood out as one of the more influential players. Since then, he has not been given a chance in the first team but was instead sent back Inter’s young Primavera side to further his development.

People have described his first touch and close to control similar to that of Xavi of Barcelona and Holland’s Wesley Sneijder, and with the Nerazzurri often lacking an attacking impetuous to break down opposition defences, it is hoped that the highly confident Bessa will soon be allowed to prove his worth amongst the men.

Juventus’ Dutch born central midfielder arrived at the club in the summer, joining from Ajax’s youth system. Able to play as an attacking midfielder or as a shield for his back four, Bouy’s impressive performances in Holland led to him captaining Ajax’s reserve team on his way to catching the eye of Juventus’ top scouts.

There can be no doubting his desire and ambition, as upon joining The Old Lady he made it clear as to which Bianconeri legends he wishes to emulate. “My idol is (Zinedine) Zidane. He was the best, but I feel good in midfield behind the strikers or in front of the defence.” But his true idol is another former Juventus player and Dutch legend – “It would be a dream for me if the Juve fans, one day, loved me like they did (Edgar) Davids.”

Soon after joining Juventus at the start of the 2012/2013 season, Bouy agreed to join Serie B side Brescia Calcio on a season-long loan. He made his debut a day later against Juve Stabia and established himself as the main component in the side’s push for promotion. In his 11 games this season, Bouy has clocked up six assists to his name and managed to get on the score sheet once.

However, Brescia, Juventus and Bouy were dealt a massive blow at the start of February when the midfielder ruptured the anterior cruciate ligament in his right knee during a game. It’s always worrying when a player so young suffers such a serious injury, but with the right support and guidance there’s still no reason why Bouy won’t be able to fulfil his potential.