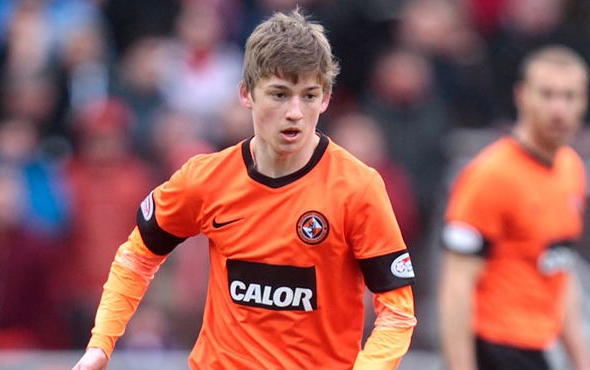 The young Scotsman is in his first full season in the Scottish Premier League, playing for Dundee United and is making a remarkable impact.

The 18-year-old’s impressions on the field have been likened to Lionel Messi, with his small frame and intricate weaving ability between defenders, he is seen as a man who has learnt from the best.

Most kids in the park attempt Messi’s nimble footwork or a Ronaldo special but barely pull such techniques off with continuity and spark. Gauld’s associates within the game have given him a huge opportunity to put his name in the sky, alongside the platters of those he resembles and admirers.

He has that undeniable ability that Barca’s little Argentinean has by scooping the ball in the attacking third and dazzling the opposition whilst permanently gluing the ball to his boots. Dominant links to La Liga cannot go unnoticed, especially with Real Madrid rumoured to be scouting in and around the frosty Scottish Highlands.

Gauld recently made his U21 international debut for Scotland against Georgia U21’s and is expected to graduate into the senior side over the next twelve months. This comes off the back of an exceptional period this season, providing a secure strategy of being the assist for The Terrors strikers.

The beginning of 2013 initially saw the Scot shifted around on a regular basis but his manager, Jackie McNamara has finally established the best position for the playmaker, settling behind the front line which stabilises and enhances options up front. His talent here has clearly shone through and a move outside of his homeland will definitely see him reap the benefits.

Challenging him at such a premature age may prove critical to his career as it has been proven how the importance of young players on a team due to their energy and fearless attitude.

Further experience has seen a completely different animal altogether, posing with maturity and plenty of ideas. Gauld has hit six goals this season in the SPL whilst providing seven assists in twenty appearances in the league.

With what Gauld poses in his locker, this is a player who could become a real vigilante, an engineer in attack and an enforcer on the pitch. Should he catch his big break we could be looking at a modest and practical genius.