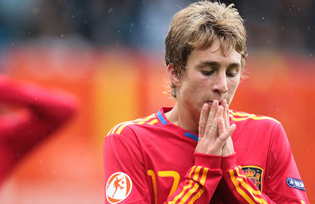 Wonder kid of the moment, Iker Muniain leads a multitude of scintillating attackers rising through the youth ranks of the Spanish National team illustrating to the world yet again that they better get used to seeing Spain at the top of football. He was part of the dazzling trio including Thiago Alcantara (FC Barcelona) and Juan Mata (Chelsea FC) that lead the attack for Spain during this summer’s U21 European Championship. Not only were the trio able to control the tempo of matches in the middle of the park, but their positional awareness in the attacking third opened up space for teammates and created gaps in defenses that led to another Championship for Spanish football.

There is a group of Spanish teenagers coming up right on the tails of the trio mentioned above that promise to offer a different, but no less entertaining, look for La Furia Roja’s attack.

The current generation of first team players for Barcelona might be the best generation of footballers ever produced by the club. With Messi, Fabregas, Pique and Iniesta all having played together through Barcelona’s academy it has created amazing chemistry on the field over the last few years for Barcelona and Spain. Gerard Deulofeu is at the head of a very exciting new generation of youngsters coming out of La Masia that has the potential to top their predecessors. The 17 year old lad from Girona, Catalonia has experienced a meteoric rise through FC Barcelona’s youth setup and currently is trying to help Barca B stay in Spain’s Segunda Liga. This comes after a season when he led Barcelona’s Juvenil A team to the League championship last season, topping the team with 15 goals on the season.

There is no limit on where Gerard may end up, and the numerous comparisons to Lionel Messi, while premature, are nearer the mark than you might expect from someone so young. He debuted for the Barcelona first team this summer on their American Tour after winning the UEFA U-19 Championship earlier in that same summer. His acceleration and 1 on 1 ability make him dangerous from the right or left wing and he has been a revelation for Barca B this season although he is yet to nail down a starting spot under new manager Eusebio. Many have compared him to another Barcelona great, Ronaldinho, as he combines exceptional speed with a plethora of skills and tricks and a penchant for the magnificent. He has an innate scoring ability and has no problem running at defenders with the ball. Deulofeu still has some maturing to do and his decision making can improve, but there are currently few teenagers in football who have as much talent as he does.

“Paco” was born in Valencia and has spent his entire career at Valencia’s successful cantera. It is no coincidence as to why the likes of Liverpool, Barcelona, and Arsenal are reportedly tracking the progress of Paco Alcácer. No matter what level Paco has played, he has scored with scoring records resembling former Valencia forward David Villa. While playing with Valencia’s reserve side he has netted 33 times in only 54 appearances and he has 21 goals in 25 caps for the National side’s various youth levels. There is no reason to think that he won’t feature for Valencia’s first team this season. At 5 foot 9 inches the comparisons to David Villa are just too easy, but he seems to be just as lethal in front of goal as El Guaje.

It has not been all rainbows and butterflies for the 18 year old. In just his second appearance for Valencia’s first team this past August, after scoring Valencia’s final goal in their 3-0 win against A.S. Roma, his father collapsed to the ground and died of a heart attack. A devastating occurrence for such a young man but he showed remarkable maturity returning to training only one week after the tragedy. This type of commitment is what has some of Europe’s top clubs circling for his signature. Negotiations between him and Valencia have stalled which has piqued the interest of Barcelona and Arsenal who might swoop in for the starlet during the January transfer window.

From Barcelona, to Valencia, to Real Madrid, the top teams in La Liga are constantly developing the next generation of Spanish talent, a detail that sets it apart from many of the other European leagues. Alvaro Morata is the only teenager featured to have played part in a La Liga season. The Madrid born player was developed by each of the three big teams in the city (Atlético Madrid, Getafe, and Real Madrid) and has played with Real Madrid Castilla for the past season. His goal scoring record in Spain’s Segunda Liga B is prolific with 17 goals in only 36 appearances with Madrid’s reserves. In the aforementioned U19 European Championship this past summer, he finished as the top scorer of the tournament with 6 goals, winning the Golden Boot. He also holds the number 2 spot in goals in the history of the Spain U19 team, only behind former Madrid prospect and current Chelsea star Juan Mata.

He breaks the typical Spanish forward mould and stands at 6ft 2in providing an aerial threat in the box. Don’t be surprised to see him follow in Juan Mata’s footsteps and leave Madrid for the chance of first team football in the coming year. He certainly seems ready for the football limelight but with Higuain, Benzema, and Ronaldo ahead of him in the pecking order a move abroad might be best for his continued development.

These players are unlikely to feature for Spain at next Summer’s Euro 2012 but look for them at the club level and certainly as we near 2014 as the new wave of the Spanish Armada hits the beaches of Rio de Janeiro and the rest of Brazil.