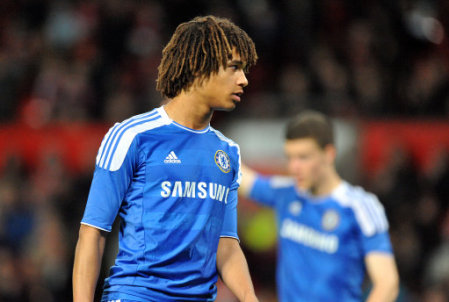 Upon first look the Chelsea youngster strikes an uncanny resemblance to former Dutch great Ruud Gullit. Along with the looks he also has the potential to be a regular player with Chelsea over the coming years.

Nathan joined Chelsea in a controversial transfer from Feyenoord in 2011, fighting off competition from several European clubs such as Man City. The move was heavily criticised by the Dutch club as they felt their player had been ‘tapped up’ by the English giants. A deal in the region of £230,000 was eventually settled and the defender was London bound.

Chelsea’s youth team was the first protocol for Nathan. He was a regular starter for the Blues in their 2011/12 FA Youth Cup triumph. He put in a string of strong performances throughout the season for the youth side. These consistent displays promoted him to the club’s reserve side during 2012.

Adaptability is perhaps Aké’s main strength. He is noted for being well capable of playing in numerous different roles for his club. Beginning in the u18s at left back last season, he quickly established a starting role at centre half. Despite being only 5ft 11” he dominates play at the back. His aerial dominance is exceptional for someone of his height. While he quite often makes marauding runs into midfield with his neat dribbling skills. A holding midfield role has also proved to be another position Aké can thrive in.

On an international stage Aké has been a mainstay for the Dutch. He began his career as captain for Holland u15s in 2010. The captaincy followed him throughout his tenure in the orange jersey. He was the youngest member of the Holland squad at the u17 European Championship in 2011. Aké took home a winners medal during that tournament in Serbia.

This success was repeated one year later in Slovenia. This time, wearing the captain’s armband, Aké led the Dutch to glory scoring one goal along the way. His impressive midfield performances earned him a place on the team of the tournament. The step up to u19 level proved easy for him where he maintains the armband.

The sacking of Robert Di Matteo has proved to be a blessing in disguise for Aké. Rafael Benitez gave many new players a chance upon his appointment. Aké was one of the many players to benefit from this. He made his first appearance on Chelsea’s bench in their 5-1 defeat of Leeds in the League Cup on the 19th December. One week later he made his Premier League debut as a late substitute against Norwich. Replacing Juan Mata in the 90th minute he became Chelsea’s youngest player this season.

To make your debut at only 17 in a team with the riches of Chelsea is no mean feat. To appear in a first team squad, especially in defence, with the strength and depth of Chelsea is an extraordinary accomplishment.

It’s unfortunate that Aké didn’t move out on loan during the January transfer window. Regular first team experience in English or Dutch lower leagues would have benefited the youngster hugely.

Aké turns 18 next week and certainly has the potential to become a key player for Chelsea and the Dutch national team.

One thought on “One 2 Watch – Nathan Aké”