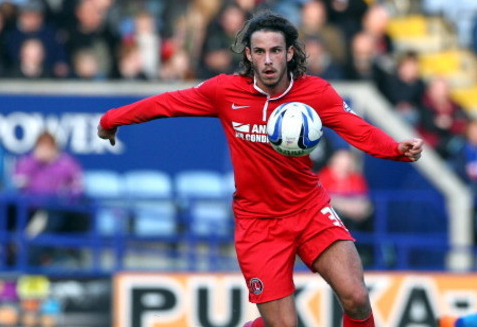 It has been an abysmal season for Charlton Athletic. Losing their manager and probably their best player in Yann Kermorgant has angered many, with new owner Roland Duchtalect seemingly determined on turning Charlton into a Standard Liege feeder club. However, in the midfield there has been a real shining beacon of hope in the form of Diego Poyet.

The son of Gus, Poyet arrived on the scene in January at the age of eighteen and hasn’t missed a game since, providing much-needed stability in front of a back four who – until his emergence – had registered just five clean sheets in 27 games. His stats may not flatter him greatly, with no goals or assists, but his stand out performances – including three-man of the match accolades from the Charlton official website have caught the eye of many, with Chelsea and Arsenal said to be amongst his potential suitors.

I was at the Valley on Good Friday to get a first hand account of what all the fuss has been about and it was clear within ten minutes exactly what he offers to the side. Operating not only as a rock in front of the back four, he is comparable to Morgan Schneiderlin at Southampton in the way he helps break down the play and turns defence into attack. He has won 54 tackles this season – an average of over three a match, drawing 26 fouls and completing 808 passes, one hundred more than any other Charlton player during this time. Compare that to Schneiderlin, who falls just outside the top ten in the Premier League for passes completed and boasts an impressive pass accuracy of 89% whilst  having completed the fifth highest number of tackles in the league and it is clear to see where the similarities in their games lie.

However, Poyet also has something else on his side – his physique. Standing at 6ft 2in and with the strength to match, he not only has the technical ability to become  a world-class player, but also the natural attributes to succeed in his holding midfield role. He has the unlearnable skill of being able to bully players off the ball in the middle of the park, akin to Yaya Toure at Manchester City (although, obviously not at the same level) and it is this which could differentiate him from a talented but limited – and ultimately Championship level player – into a Premier League sensation, and a potential title winner if the right clubs come in for him.

The main weakness in his game is probably his decision-making, and linked in with that his general concentration. He has already accumulated three yellow cards in his fifteen games and committed one error which led to a goal – a failed take on in the midfield. Indeed, having attempted seven take ons in the fifteen games he has been unsuccessful in three – which would undoubtedly be a slight worry for the defence knowing that at any moment there is near enough a 50/50 chance that Poyet will lose the ball if he is to take a man on. However, as is clear from players in all positions on the pitch, from Daniel Sturridge to Wojcech Szczesny, good decision-making is an attribute which comes later in a player’s career and for many world-class players is one of the last ones to develop.

If he can cut out these momentary lapses of concentration, which you would fully expect him to do considering he is only nineteen, then he will undoubtedly go far as near enough a complete midfielder. It is a crucial time for him now as he may be better off continuing at Charlton for at least one more season (providing they are to scrape Championship survival) but the demand for his signature from a host of Premier League clubs will undoubtedly tempt him to move at a stage which might be a little too early.

His best hope is that Gus drills it into him to stay put and hold tight until he is developed enough and ready to be seriously challenging for a Premier League starting place, an event which based on current evidence should be no more than a year or two away.