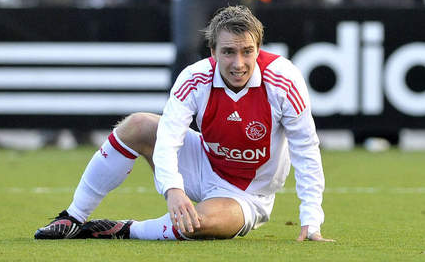 “My first step should not be too big”, a young and ambitious Christian Eriksen said when penning in his deal with Ajax Amsterdam. When you’re a 16 year old kid having trials with the likes of Barcelona and AC Milan, the touch of arrogance that some may interpret in such a statement can probably be forgiven.

However, the consideration of this starting destination to the professional game was an awful lot more precise than Eriksen’s words might have initially come across.

The Ajax academy is World famous, known as the breeding ground of Dutch football, and it seems they’ve knocked out another superstar in this adopted Dane.

On Monday 7th November, Christian Erikson was named the 2011 Danish player of the year, a landslide result announced in Copenhagen, and the midfielder was quick to relay the accolade onto his teammates and coaches at both Ajax and Denmark. A maturity no doubt flourished around the Amsterdam training facilities.

The transfer mill turned. Manchester City, Chelsea, Liverpool and Barcelona all reportedly showing interest in the Dane. The flourishing Eriksen is in no rush to move on though.

His first step may have been a little bigger than he initially envisaged, above anything else, it was without doubt the correct one to take.

Ajax prides itself as a football club on its development centre. Around the epicentre of their renowned 4-3-3 style, Ajax enhances a players mind set to work on attractive, quick and creative football.

Developing what the club refer to as TIPS, (Technique, Insight, Personality and Speed), Ajax have something more of a tradition than a habit of providing the football World with special talents.

Johan Cruyff, Marco Van Basten and Dennis Bergkamp are but a few World class names to emerge from the club, with the latter back where it all started, continuing the Ajax tale.

Ex Nottingham Forest winger Bryan Roy may be found swinging in crosses for academy players on the training ground it all started for him too and former Manchester United colossal Jaap Stam is another former Ajax player passing on experience to the next breed of stars to wear the famous red and white.

The Ajax football family is a strong one, filled with legendary names from the past couple of decades, tied together by the clubs vision, continuingly being relayed by their Godfather Johan Cruyff.

It’s an attraction much more beneficial to a young footballer than the money some European giants could ever compensate. Merits Eriksen recognized, snubbing the bright lights of London with Chelsea for a football education in Amsterdam.

The young Dane considered Ajax to be “a fantastic chance to develop as a player.” Prior to his recent award he was named the 2010/2011 Dutch football talent of the year. It’s clear to see he’s seized the chance too.

Since joining the academy in October 2008 from Danish side Odense Boldklub for a fee estimated to be around €1 million, the Dane hasn’t looked back.

In his first full season with the first team he helped Ajax to the 2009/2010 KNVB Cup, before going on to add to last seasons Eredivisie title, the clubs first league championship in 6 years.

The famous Ajax way continues to be implemented with over 50% of the current first team squad produce of the Ajax youth academy, lead by the tailsmatic Eriksen.

Eriksen, touted the new Michael Laudrup, is evidence that this cresh of footballing ability continues to steer the clubs direction. This success brings with it interest, and Eriksen’s form is turning heads towards Amsterdam.

English big spenders Manchester City were reportedly ready to mount a bid for the Dane this summer but moving to the Premier League doesn’t seem to appeal to the young midfielder just yet; an indication the learning curve in Amsterdam is yet to peak.

Eriksen, quick to dismiss the link, said “There is no point moving to a club where I will sit on the bench” and still considers Holland the best place to continue learning his trade.

After impressing against England back in February 2011 for his country, the Ajax man said of the English game:

It’s a tough league. I could see from tonight that if you go past them, they want to split you in two.

Sentiments that demonstrate the clear divide between the English mentality and teaching methods in Holland.

Eriksen appears in no rush to leave the educational hub that is Ajax Amsterdam and continues to lead the charge there. How much longer he’ll continue to do so, until he feels another step needs taking, remains to be seen.

For now Ajax will continue to enjoy yet another talent they have nurtured so effectively.

A freelance football journalist from Leicester who, since graduating from the British College of Journalism, has had work published in the Leicester Mercury and Soar Magazine as well as a variety of websites. Big Leicester City fan and can be found on Twitter @DavidJCockcroft

One thought on “One 2 Watch – An Ajax Education”