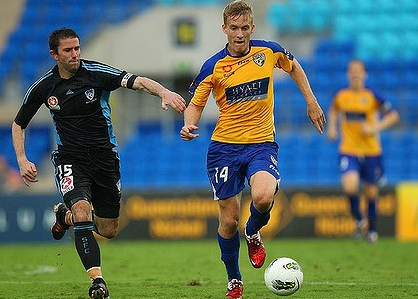 One of the joys of watching football is spotting a young player that looks a bit special; a player that has forces their way into the first team and seizes the opportunity. This unpolished diamond shows such potential that you just know that they are going to make it.

And on the day they make their big money move to the massive club you smugly smile and bask in the self satisfaction of knowing that you have predicted their future.

The A-League is a development league. Therefore, it’s purpose is to provide the springboard for young Australian/New Zealand talent and promote them to the wealthier overseas clubs. At least, that is the theory. Not all clubs have embraced this philosophy and focus on winning the league by filling the squad with safe, experienced, older players.

Despite this, there are some quality kids to look out for. These five are the best form young players this season that the overseas scouts should snap up.

Mat Ryan was originally signed last season by the Mariners to be back up to Jess Van Stratten. However an injury to Van Stratten gave him his chance and he took it with both gloves. He established himself in the side and played in last season’s grand final winning the Joe Marston medal, despite being on the losing side. This season his form has improved as the Mariners rocketed up the league.  He’s two years into a three year contract. He won’t be in Australia for long. Enjoy watching him while he’s here.

Now 24 may be a bit old for a young gun but he’s got the tools to be successful.  He’s fast, reliable, good going forward and strong in defence.  He doesn’t have many assists to his name which is a self confessed area for improvement.  It may take him a while to make the big time but he will get there.

Probability of success:  Strong.  Not rock solid, but strong.

Taylor Regan will not be a Premier League player, but he will play for a decent club in Europe. The reason for this is that he’s comfortable on the ball with an excellent eye for a pass. He’s forced his way into the first team at Newcastle and is the prototype player manager Gary Van Egmond is looking for. Next season will be massive for him.

Predicting success for a forward can be the most difficult to predict of all, but the Gold Coast youngster looks the goods. He’s creating chances for himself in a struggling team which is a good sign. He looks comfortable on the ball and always seems to have plenty of time to pick out a pass or create space for himself- a quality that all great players possess. Hopefully Ben stays in Australia for long enough to truly establish himself and doesn’t leave until he’s a big fish in this small pond.

193cm of silky smooth skills. Eli Balbalj is one of the keys to Melbourne Heart’s success this season. He’s chipped in with 4 goals and an assist but it’s his quality on the ball that impresses the most. Whilst Halloran should stay a bit longer, Balbalj is a player with the tools to go overseas now and develop his talents.