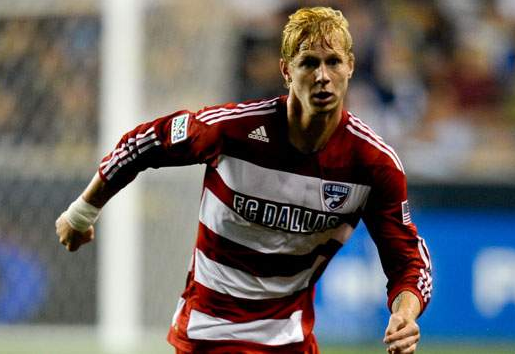 With the Major League Soccer season now done and dusted, few players from across the pond represent a remarkable opportunity for Europe’s elite clubs both on and off the pitch. Age, size, strength, speed, and technical skill on the ball are all important attributes that one needs to make it in Europe’s top leagues, and certainly FC Dallas’ Brek Shea has them all in his locker to make a big impact on the other side of the pond.

A native of College Station, Texas, Shea has been with FC Dallas since 2008 and has made 77 appearances for the club, scoring 16 goals. He’s also been capped by the U.S. national team on seven occasions, with the first coming in 2010. The pace and ball skills that the 21 year-old Texan brings to the pitch are particularly impressive because of his physical stature. Standing at over 6ft 3in tall with a filled-out build, Shea is tailor-made for some of Europe’s top divisions that are a notch above Major League Soccer standards as he uniquely blends the physicality of a defender with the raw pace and skills of an attacker.

Having seen video footage of him on YouTube, it is little wonder that the likes of Chelsea, Manchester United, Manchester City and Liverpool are a host of Premier League clubs, as well as some of Europe’s prestigious sides who have also taken an interest and have kept a close eye on his performances in the MLS this year, tracking the FC Dallas attacker who can play out wide or as a centre-forward. Having scored 11 goals and contributed 4 assists in 31 appearances, and leading his club to the MLS play-offs this season, he is regarded as one of the leagues’s best young talents and is already an established member of Jurgen Klinsmann’s U.S.National team. Ofcourse YouTube can make anyone look like the new Zidane, but this merely illustrates the potential that Shea has. The versatile American has just begun training with Arsenal and perhaps looks to cap off a brilliant year with a transfer to the Premier League giants.

Shea’s representative, Barry MacLean, recently said a number of teams were interested in the attacker and that the U.S. star could move to England in the future. “I do know people are asking me about Brek as he is the premier talent in America,” MacLean said. “There is a real buzz around Brek as he is a real quality player. He has a contract with the MLS and FC Dallas for another three years so at this point it is premature to talk about a move.”

Shea is just one of a number of American-based players who could be farmed out in the MLS off-season, either on loan or to buy in the New Year window. U.S. boss Klinsmann is keen to see as many of his squad in European football as possible and has been encouraging moves to Premier League sides to enter January camp in top shape.

What Klinsmann’s doing by giving fresh, young faces like Shea a shot to contribute to the U.S. National team might be exactly what American soccer needed to evolve beyond second-tier international relegation. And the opportunity to train at some of Europe’s top clubs will undoubtedly stand Shea and other young American stars in good stead. However, sometimes training stints in Europe don’t necessarily yield positive gains all the time. Freddy Adu trained with Manchester United in 2006, but failed to make a good impression on Sir Alex Ferguson. But plenty of other Americans have hit the ground running in England and Scotland for example, and Shea could be the latest American to gain valuable experience overseas.

A case in point in recent years has been the U.S. national team captain and talisman Landon Donovan. Having began his professional career in Germany with Bayer Leverkusen in 1999 aged 16, and in the process becoming the youngest American to sign for a foreign club, his game developed into the USA’s most potent finisher. However, Donovan’s career stagnated at Leverkusen and returned to the MLS on loan with the San Jose Earthquakes in 2001. After another unsuccessful spell in the Bundesliga, this time on loan at Bayern Munich, Donovan then had a successful loan period with Everton, after returning to the MLS for the second half of the 2009-10 season, scoring two goals in 13 games.

In addition to a successful season with FC Dallas, Shea was also awarded the 2011 Michael Johnson Performer of the Year Award. The award serves as the official athletic performance training partner with a host of clubs in the MLS. Through the partnership, MJP honours one athlete each year who most exemplifies the center’s fundamentals, and recognizes the player who most embodies the athleticism, determination and work ethic for which MJP is renowed.

For FC Dallas, Brek Shea has become the face of the franchise. While he is certainly set for a move to Europe in the coming years, 2012 is shaping up to be a year at Pizza Hut Park that is all about the blonde kid as he takes his next step in his career progression. He has the potential to be the best attacking player the U.S. has ever produced and watching hiw grow in 2012 will be a real treat for all Dallas fans. Also on the radar for Shea is the upcoming 2012 Olympics where he should be one of the main faces and attacking threats for Team U.S.A..

And if Arsene Wenger and his scouts like what they see with Shea and his progression while on trial at Arsenal, do not be surprised if he is training with the club full-time come January.

One thought on “One 2 Watch – Brek Shea”