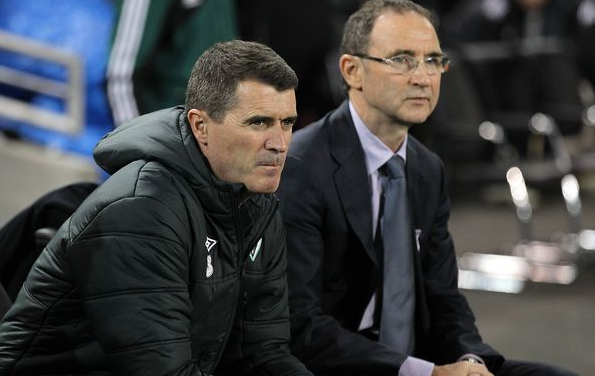 Last Friday night, the Republic of Ireland took on Latvia in a friendly at the Aviva Stadium. And while the rest of the footballing community was far more concerned with the fallout from the last few days of World Cup play-offs, Irish fans and its media flocked to Dublin in their droves to witness the beginning of a new chapter in its storied history.

And while it may very well have been billed as a friendly, it was difficult for any supporter of the Green Army to look upon the fixture as a casual kick about. After all, their pride was at stake following a series of disheartening performances on the road to Brazil. Also at stake was the prestige of the new regime that’s now in control.

Granted there were no points to be won, no seedings to be affected and no hopes of qualification at stake, but it was still a highly intriguing match.

Getting off to the best possible start against Latvia was something that both Martin O’ Neill and his right-hand man, Roy Keane were sure to eagerly plan for, and it is still of the utmost importance that they ensure their tenure continues as it started; convincingly.

In the end, they got their dream start with a much-improved performance which saw the Boys in Green dominate proceedings by controlling possession and pressurising the Latvians deep in their own half. Their 3-0 victory was just reward for their efforts and will, no doubt, have rekindled many an Emerald Isle football romantic’s belief in the national team.

For any country to taste defeat at home, a feeling of disappointment and bitterness will always follow suit – but its effect is doubled when it sets the tone for the remainder of a managerial stint.

However, a loss on Friday would certainly not have been the most disastrous result Ireland have ever suffered – something that will be important for Ireland fans to remember if things don’t pan out as wished against Poland.

The build-up to both games has been huge. Opinion and conjecture have been in abundance ever since the FAI announced who was to take charge of the national side, and it would appear as though people are still very much divided on their hopes for the future.

Unsurprisingly, there will be many out there who will think that Roy Keane is not the right man to help guide Ireland to any sort of success – pointing in particular to his supposed lack of loyalty to the squad – and it wouldn’t be surprising to see the lynch mobs forming early with defeat in Poznan on Tuesday.

Others think that he may not work so well in the capacity of a number two, that his natural tendencies towards leadership may be difficult to contain and could lead to problems with O’ Neill – despite his objections to the contrary.

And some are of the opinion that this duo were appointed too quickly – perhaps John Delaney and company could have prolonged their search and appointed someone else – some think Mick McCarthy, a man who led Ireland to the second round of the World Cup in Korea/Japan, would have been a far better choice

Of course, it is impossible to say what would have been the right thing to do. For better or worse, a new set-up is now in place and the road to France 2016 will be embarked upon within the next year or so.

As for their two friendly clashes with Latvia and Poland, it is certainly not the be all and end all, although it would be a nice introduction to the world of international management for the pair to come away with two straight wins. And the lack of any real pressure should help the players perform with a little more creative fluidity and freedom of expression, just as they did against Latvia – with Aiden McGeady and James McClean in particular looking very nimble and confident on the flanks.

After all, a good start is not always a sign of things to come. Back in 2004, Steve Staunton took charge of the national team as one of the most respected footballers in the Irish game and got off to an absolute flyer by hammering Sweden 3-0 in Lansdowne Road – Robbie Keane and Damien Duff getting on the scoresheet that night.

What followed was a well-documented train wreck of Louth accents and woeful tactics which saw Staunton’s players chug along unconvincingly through the motions until his eventual sacking after a string of poor results.

This is a transformation that will take time, and it’s important for fans to remember that.

In truth, while winning should always be the primary goal, defeating Latvia and Poland will mean very little in the long run.

Admittedly, it does allow the former Celtic boss and the Manchester United captain of old to start weaning James McCarthy and others off the Giovanni Trapattoni-infused drip they’ve been fed up until now. Because if there’s one common element that O’ Neill and Keane share it’s a winning mentality.

Although it would be foolish to think that they could revolutionise Ireland’s footballing methods and transform them into world-beaters overnight, they can at least make a start on banishing the demons of constant underachievement and mediocrity that Trapattoni had instilled over time.

For starters, they know the League of Ireland exists. Roy Keane played there for a number of seasons for Cork City and it wouldn’t be surprising if the former Red Devil drew upon his ties there to help improve the link between football at the higher scale (the national team) and the football on the lower rungs of the ladder (the domestic league, underage, etc).

As for O’ Neill, he was heavily involved in the SPL – one of the weaker European leagues and has just as much passion and interest in guiding less-powerful teams to success as he does in becoming the main man at a cash-rich super-club.

In short, they have a past grounded in footballing inferiority.

Yet it is that very same grounding that has helped propel them to amazing levels of success at the highest levels, and don’t be surprised if Ireland chase matches more under John Delaney’s new appointment.

So, it’s unlikely that they will reflect upon the repercussions of either of these two encounters for too long. After all, the squad they inherited for their two upcoming friendlies was hand-picked and personally crafted by Noel King. So, it’s unlikely we’ll see the effects of their vision until all ties with their predecessors are cut and they can begin to build fresh, new foundations for the future.

There’s over six months of domestic action still to go and plenty of time for new talent to be drafted in. So, expect to see both men closely scrutinising the performances of all Irish players with a view to chopping and changing the squad’s make-up to suit them as they get ready to pave the way for a new-look Ireland come the European Championship qualifiers.