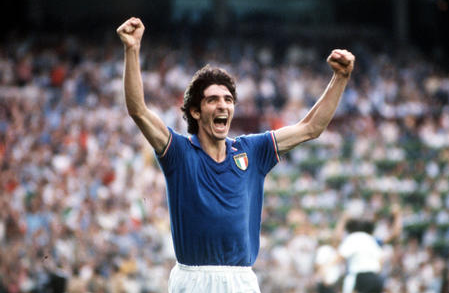 One of my earliest World Cup memories is sitting in front of the television clutching a plastic tango football while being mesmerised by the World Cup 1982 encounter between Italy and Brazil. The sheer colour and pageantry of the occasion along with the constant samba drumbeat made a memorable game simply unforgettable.

Millions of soccer fans around the world witnessed Italy twice come back from the brink of World Cup elimination to knockout one of the pre-tournament favourites before going on to lift the trophy themselves. One man was responsible for breaking the hearts of millions of Brazilian soccer fans that hot July afternoon in Barcelona. That man’s name was Paolo Rossi, a player who hadn’t kicked a ball professionally for two years prior to the tournament.

Born September 23rd 1956 in Santa Lucia, Paolo Rossi became one of the most feared strikers in Serie A following spells at Como, Vicenza, Perugia, Juventus, AC Milan and Verona. Known as ‘Pablito’ he was selected by Enzo Bearzot for the 1978 Italian World Cup squad in Argentina and netted three times.

A natural goal-poacher he appeared to have the world at his feet until an enquiry in 1979 accused Rossi and several other team mates of fixing a 2-2 draw between Perugia and Avellino the previous season. A three year suspension was handed down which was reduced to two after an appeal but Rossi (aged 22) was unable to play professionally for the next 24 months.

Bearzot never lost faith in his young striker and amazingly selected him for the 1982 World Cup squad. Italian journalists argued he was in no shape to take part and described Rossi as ‘a ghost wandering around the field aimlessly’ in Italy’s group games. Bearzot persisted with Rossi amid continual protests from the media. He was handsomely rewarded with astonishing displays from ‘Pablito’ in the latter stages of the tournament.

44,000 crammed into the Estadio Sarriá ground in Barcelona for the crucial second round Group C encounter on the 5th of July 1982. The famous old stadium, home to Espanyol until its demolition in 1997, heaved with excitement hours before kick-off. Unlike recent World Cups the 82’ edition saw four groups of three first round qualifying countries play a round-robin mini-league to determine the competition’s semi-finalists.

Both Italy and Brazil had already defeated Argentina in what was labelled the ‘group of death’ to setup what was essentially a quarter-final tie.

A draw would suffice for Brazil who had already lit up the tournament with a series of scintillating displays and world class goals. Blessed with phenomenal talent such as Junior, Socrates, Falcao, Eder and Zico the South Americans were expected to progress.

By contrast Italy’s progression had been stifled by ultra-defensive displays and roughhouse tactics. The Azzurri had struggled to qualify from their initial group registering three un-impressive draws against Poland, Peru and Cameroon and an on-going war with the Italian media resulted in the entire squad refusing to conduct any interviews. Italy had to beat Brazil to make the last four and kicked-off on a sweltering afternoon with few pundits giving Bearzot’s side any hope of winning.

Italy stunned their opponents with an uncharacteristically up-tempo start and grabbed the lead in the 5th minute. Antonio Cabrini curled a pass to the far post where Rossi ghosted in to glance a downward header into the net. Brazil responded within seven minutes of falling behind. Socrates combined with Zico and raced into the penalty area before shooting low past Dino Zoff to tie the score at 1-1 and send the Brazilian fans into wild samba-induced celebrations. Once again the Azzurri hit back when Rossi intercepted Cerezo’s horrific back-pass and hammered the ball past a stranded Perez to restore Italy’s lead.

Brazil had to wait until the 68th minute to reply when right-back Junior embarked on a mazy dribble and found Falcao on the edge of the box. The blond-haired midfielder unleashed a thunderbolt into the bottom corner of the net. The Brazilian’s celebration was as memorable as his goal; the Roma player racing arms outstretched towards his team’s dug out and evading a horde of substitutes before embracing his manager. Brazil knew a draw would be enough to qualify but the Italians had other ideas and abandoned their defensive tactics in search of a winner.

The match-winning and career defining goal of Paolo Rossi arrived in the 75th minute. The South Americans failed to deal with a Bruno Conti corner and the ball fell to Rossi on the edge of the six yard box from an initial Marco Tardelli shot. The much-maligned Italian striker made no mistake with a pirouetting turn and shot to complete his hat-trick and win a magnificent game 3-2. From zero to hero, Rossi became an overnight Italian soccer legend.

Brazil returned home to lick their wounds having produced the most electrifying displays of the 82’ tournament while Italy went on to capture the Jules Rimet trophy with Rossi taking home the golden boot award for top scorer thanks to a personal haul of six.

A brace in the semi-final win over Poland was followed by one of Italy’s three strikes in their 3-1 victory over West Germany in the decider. The opening half didn’t begin well for the Italians with Antonio Cabrini firing a penalty wide of the target. The Germans looked tired following their Herculean efforts to knock out France following an epic semi-final in Seville just days earlier. The final turned on a breakaway by defender Claudio Gentile who burst through a flagging West German back four before crossing for Rossi to pounce and smash an instinctive effort past Toni Schumacher.

The Italians pressed forward in numbers following Rossi’s opener and scored twice on the counter-attack with Marco Tardelli (who will ever forget his emotive celebration) and Alessandro Altobelli securing the trophy for Enzo Bearzot’s men.

Paolo Rossi won the European Footballer of the Year award in 1982 and ended up scoring 20 goals in 48 internationals for his country. He retired after a glittering domestic and international career to tend to his farm in Tuscany where he produces Wine and Olive Oil to this day. Nowadays he is a regular football pundit on Sky Italia.