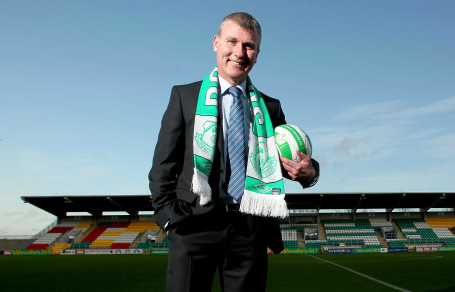 Another late goal conceded, more valuable points dropped in the race for the title, prompted the predictable yet tiresome chants of ‘We want Kenny Out’.  Last Sunday’s 1-1 draw with St Pats was another disappointing result following on from the crushing 4-0 defeat to arch rivals Bohemians.

These poor results have heaped enormous pressure on manager Stephen Kenny. There is no doubt that a significant section of the Hoops fan base now want the Tallaght native out of their club. The question these fans need to ask themselves is what would sacking Kenny achieve?

There is no recent history of removing a manager midway in the middle of a League of Ireland season. Indeed, no manager has been removed mid-season since Galway United sacked Tony Cousins in 2008. It is therefore legitimate to wonder whether sacking Kenny would really achieve anything other than destabilising a well-run club. There is certainly no recent body of evidence that links a managerial sacking to a sudden upturn in results.

There is also the fact that Shamrock Rover’s season is far from over. Rovers only trail Sligo by eight points in the title race. Sligo’s 1-1 draw with Bray illustrates that the league leaders are far from invincible and that the road to the championship has a few more twists and turns in it yet.

Sligo’s wait for a league title is so long, that should Shamrock Rovers narrow the gap; the pressure on Sligo will grow as the week’s progress.  Kenny’s men have the squad, the talent and the experience to capitalise on any potential slip ups. Baraclough’s side have benefited from late goals both for themselves and against Shamrock Rovers. Sligo have salvaged wins from draws against Shelbourne and UCD while Rovers have dropped valuable points late on against UCD and Pats.

Luck changes throughout a season and should it swing Shamrock Rovers way then it will be a major boost for both Rovers and Stephen Kenny going forward.

Undoubtedly Kenny’s men must tighten up at the back to help preserve the value of their attacking exploits. The re-signing of Pat Sullivan will help shore up the defence. The next task for Kenny is to solve the Goalkeeping problem. Put simply Rovers need a solid dependable keeper that will not make unforced errors at crucial times.

Sacking Kenny will not improve their fortunes. Removing Stephen Kenny, who has significant European experience, will damage Rovers chances in the upcoming Champions League Qualifiers. Kenny’s experience and tactical nous in Europe will help not hinder Rovers as they attempt to match last season’s heroics.

Europe aside, Rovers are still in with a chance of winning both domestic cups. Add in the fact that they are still in the hunt for the league title and a domestic treble is not beyond the Tallaght outfit. That’s a possibility that many League of Ireland teams can only dream of at this time of year.

Contrary to the rumours, Kenny is popular in the Shamrock Rovers dressing room. Stephen Kenny is a player’s man. The players he worked with at Longford, Derry, Bohemians and Dunfermline all speak highly of his creative and innovative training methods. He keeps players stimulated and they enjoy their work each day.

Kenny’s reputation as a player’s manager was reinforced by Ronan Finn’s comments after Sunday’s game. Finn spoke passionately of how the players at Shamrock Rovers are fully behind the manager and how they are working to turn the situation around.

The player’s performances over this period have not been poor. They have suffered as a result of individual mistakes and an element of misfortune. The quality of the football and their high level performance reinforces Finn’s assertion that the players are playing for their manager.

It should not be forgotten that Kenny’s record at Longford, Bohemians and Derry is superb. He is a serial winner, who delivers good football on top of trophies. Yes, he does need to sort out the defence and Goalkeeping problems at Rovers but he needs time to do so. His managerial record illustrates that he deserves time.