To most observers the Isle of Wight is a place for sunny summer holidays, or the serious business of competitive sailing during Cowes Regatta week. However the island has a history, culture and competitive edge to its football.

For one club, Newport (IoW) FC of the Wessex Premier League, and two men in particular, “the times they are a changin’”. David Hayles (Chairman) and Andy Sampson (Manager) are about to spend their first season together, both newly appointed to their respective roles. I met them both to talk about their plans, objectives, and how the Supporters Trust kept the club alive.

David Hayles has been a supporter since 1991. He worked with the Supporters Trust as a volunteer, before joining the club’s Board of Directors. During May 2015 he became Chairman Newport (IoW) FC. Hayles looks comfortable in in his working attire, collar, tie and suit, he talks with ease, confidence and enthusiasm as we chat in the club’s boardroom.

“I’m delighted to be given an opportunity to take the club forward. There are many jobs around the club in need of completion, some short term, others with a longer timeline,” says Hayles.

“My first decision was to appoint a first team manager. Steve Brougham (ex-manager) departed late last season after serving us faithfully since 2011. He brought a great deal of stability to this club. We all have fond memories of those great matches witnessed under his management”

“Whilst the board of directors had discussed several candidates for the vacancy, there was only one man I thought was right for the role, which was Andy Sampson. He played at the club for many season, was successful in management roles to date, developing young players from reserve to first team football. Yes I was absolutely delighted to secure the appointment of Andy Sampson” Hayles says with a huge grin.

Sampson’s association as a player with the club is long, varied and successful. Signing for Newport (IoW) FC at 22-years-old, he played more than 280 games, scoring over a 100 goals.

“I was reasonable strong with a decent turn of pace, not electric but was always prepared to run down lost causes, or like most strikers put my head in silly places” Sampson says describing his playing style. After six seasons with Newport (IoW) FC he moved to Fareham Town for a season, then onto Ryde where his approach to football was changed forever.

His manager at Ryde was Dennis Probee whose style and ethos was with technique as opposed to repetitive regimes of fitness and stamina.

“I was 30-years-old when I started to play for Dennis, he made me a better player. In my two and half seasons with him I managed to hit over 90 goals. If only I could have been coached like that in my younger days,” he ruefully reflects.

Probee sadly passed away last year at the age of 89 after a short illness. Sampson describes him as “very friendly with a great sense of humour always showing us how we should be doing things on the pitch, always there for a chat and great advice”.

Although Sampson closed off his playing career at Lymington Town, he began dipping his managerial toe in the water taking on the club’s under 10s team. He progressed through the youth ranks before becoming first team manager at Cowes Sports FC. Success soon followed, winning the Isle of Wight (Gold) Cup in 2007 and 2008.

Sampson’s effective style was gaining attention by various footballing sources on the island. During 2009 he was appointed manager of the Isle of Wight team which competes against other island teams every two years. 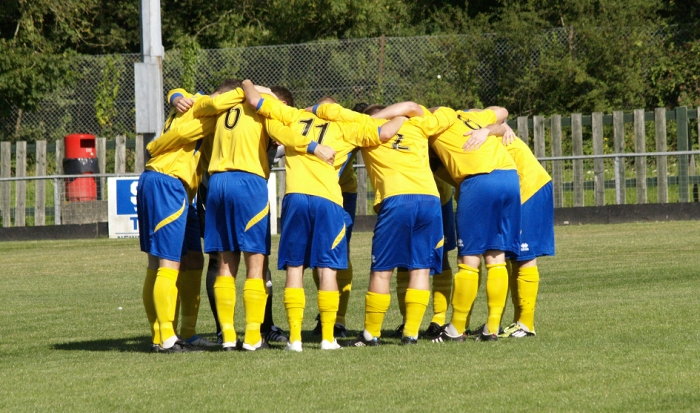 In 2011, Sampson achieved his greatest managerial accolade to date. He led his IoW host team to victory in the final, beating Guernsey 4-2 after extra time. A crowd of over 3000 were at Newport’s St. George’s Park stadium cheering the islands team to victory.

Amongst the spectators watching the historic event unfold was David Hayles. “Yes I remember the game very well” he recalls. “When I became Chairman Andy Sampson was the manager I wanted for Newport. He took some persuading, but thankfully he’s here”. I almost expected a fist pump at the dual accomplishment.

Hayles is a racing car enthusiast, he slips into top gear when setting out the club’s future plans.

“We’ve done well most seasons finishing in the top ten. Off the field we have a lots of room for improvement,” he says “If you look around the ground we have three companies advertising on our banner boards. We need more companies to become associated with Newport (IoW) FC. To that end I’ve brought in a Commercial Manager”

Hayles is a strong advocate the town needs to get behind the club. He has a clear statement of intent. “I want to see the club back in the Southern Division, built on a strong financial and commercial platform, supporting our local youth community”

It was a good year for Newport (IoW) FC in 2001. They won the Southern League east division gaining promotion the Southern Premier League. However the halcyon days were not to last long and, during season 2003/04, the club was placed in administration.

When I ask if he’s concerned new plans and ideas may for some bring back memories of the club almost going out of existence? At this point he takes his foot of the gas to negotiate the chicane of a question. He pauses on an answer.

“When I took the role of Chairman I said good communication was key in moving the club forward. This time everyone is working together, formatting plans and timescales to various projects. Basically no surprises,” he says.

“Our plans are agreed. I know from first-hand experience how hard the Supporters Trust have worked in making sure the club has survived over some turbulent years. Those volunteers sell programmes, raffle tickets, managing the club shop, providing hospitality for the visiting teams. We won’t let them down” he says with intent.

He continues with his vision.

“The club currently has 15 youth teams which will be kept in place and developed. There is a veterans’ team and a disability team,” says Hayles. But no women’s team I highlight. A little too early with my observation I’m about to find out.

“Ah, by next season we plan to have a Newport (IoW) FC Ladies team. How to register and what league they would play in, those type of discussions are already in place,” he confirmed. “I’m also very keen to get more youngsters to our games. Some of the ideas will be rolled out as the season progresses.”

Back onto a commercial footing Hayles says the club’s profile with press, media and radio need to significantly improve.

If my interview and time with Sampson is anything of an indicator, he must be a manager easy to understand. Not once does he talk about formations, tactics or “leadership quotes or management speak”. He doesn’t grab bottles and glasses to show me how he encourages a full back to overlap. “I like my teams to keep the ball on the grass” is the most expressive overview he offers. So on a sunny July afternoon I go along to watch his team in action during a pre-season friendly.

They cruise to a 7-1 win. Undoubtedly they will meet more physical teams with better tactical challenges. However, his squad’s performance was a pleasant surprise and in parts a shock. Sampson has a few older players with a multitude of early 20s and teenagers on show. 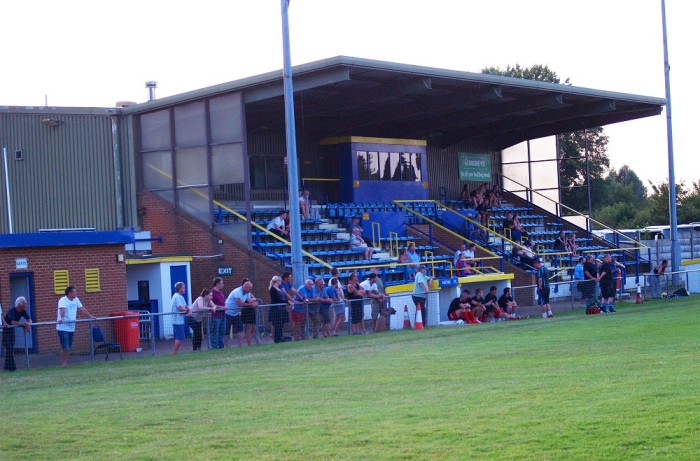 Other than at academy level with top flight clubs, rarely have I seen such consistency in discipline of play and good football behaviours. As expected he has them playing a simple passing game. No arguments, no blame game for mistakes. Plenty of encouragement throughout the team. A strong ethos of coaching young players in (not surprisingly) technique, a genuine pleasure to watch.

Both Hayles and Sampson know the next couple of seasons will be work in progress, both on and off the field. The Wessex Premier Division is a hard league to win. Many of the teams have substantial salary structures in place for their players and staff.

Ex-professional players manage the likes of AFC Portchester (Graham Rix) Salisbury (Steve Claridge). There is also the added spice of a local derby. Cowes Sports move up a division having won promotion from Division One last season. The local derby game away will be the only time Newport (IoW) FC don’t have to leave the island to play a league fixture.

Newport (IoW) FC have nurtured the likes of Brendan Rodgers (Liverpool manager) back in 1993/94 as part of his career development. At the other end of the spectrum Guy Whittingham (ex-player and manager at Portsmouth) ended his playing career during 2003/05 season.

So who’s next? Could it be there is a player or players ready to develop and emerge from the squad of 2015/16?

During my time in the town, being at Newport’s ground, watching the team play, talking to spectators and volunteers there is a sense the club is ready to move on, grow, develop and expand. Hayles and Sampson are about to begin their respective managerial journeys. They have already injected enthusiasm and purpose where they want to take the club over the coming years.

If the folks and businesses do get behind the club and its new management team there are exciting and challenging times ahead not only for Newport (IoW) FC, but also the town of Newport as well.