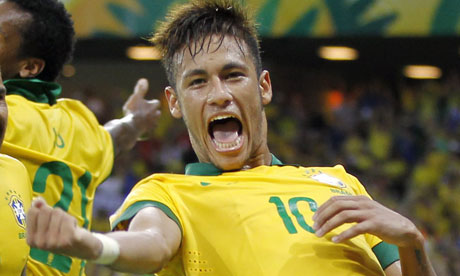 A star that outshines the other 21 on the field whenever he plays for Brazil, Neymar has a bright World Cup to look forward to in just over two weeks.

With his talent soon to be on display for the whole world to see in his backyard at the tender age of 22, Neymar has the chance to grow larger than life and become immortalized along with the greats such as Zinedane Zidane, Diego Maradona and Pele.

Although coming off a roller coaster debut season at Barcelona, Neymar’s international record of 30 goals in 47 appearances suggests that he will produce fireworks in Brazil, using his range of talents to light stadiums up.

It is no secret Neymar will be the talisman for Felepe Scolari’s side this summer, as shown in his international career and especially last year’s Confederations Cup, where he displayed how he deserves to have the legendary number 10 on his back.

Last year’s Confederations Cup was the first time Neymar donned on the legendary number 10, and it seemed to have possessed him. The Brazilian’s flair, pace, trickery and finishing left the best of the best for dead. The 22-year-old’s performances showed his talents as he outclassed nations including Italy, Uruguay and reigning World Cup champions Spain, scoring a total of four goals in five games.

Neymar looked to have appeared as a ghost to these nations, the defences never having an answer or response to his trickery and movement on and off the ball. In the attacking third Neymar was a gazelle, skipping gracefully along the grass past onrushing challenges, but as soon as he entered box, Neymar was a hungry jungle cat, pouncing on his prey and dispatching his chances.

With the marketing of the upcoming World Cup being colourful and fresh, it’s only natural Neymar is the poster-boy. The young Brazilian plays a colourful, charismatic game where he ignites crowds when he is on fire. His trickery and ball skills rally them and get them to raise the roof, bringing the twelfth man alive. This in turn creates an electric atmosphere and no matter who the opposition is they get zapped, but Brazil conducts it and gets supercharged.

The partnerships Neymar formed in the Confederations Cup also show why he will be the star of the world cup. His link-up play with Oscar Dos Santos, Fred and Hulk was amazing. The four of them seem to have a telekinesis relationship, reading each other’s minds and understanding each other’s movements.

The best display of the four horsemen in terms of effectiveness was the third goal against Spain in the Confederations Cup Final. The move started when Oscar tapped a ball into the feet of Hulk in the attacking third, who then spread it wide for Neymar to run over and drag defenders with him. The ball then ended up at the feet of Fred who put the ball past Casillas into the back of the net.

In Neymar, Brazil have a strong figurehead at the front of their strong international naval vessel. The Brazilian’s God-given talent, charisma and link up play are what will make him the star and shine ever so bright in Brazil this summer.