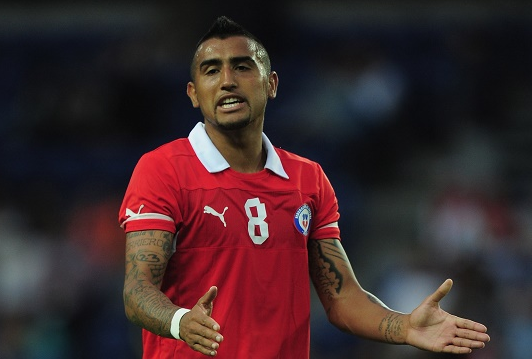 Arturo Vidal’s future in Turin remains unclear with an array of European clubs said to be interested in the Chile talisman.

Real Madrid have been linked with the 27-year-old for consecutive transfer windows while Louis van Gaal and Arsene Wenger voiced admiration towards the Juventus midfielder recently.

Vidal is destined to make have a real go at winning the Champions League which you think would rule Manchester United out of the running, but right now Ed Woodward seems to be negotiating back and forth with the Italian side more regularly than the likes of Bayern Munich, Real Madrid and Arsenal.

United need a tough-tackling midfielder with a creative spark making Arturo Vidal a perfect fit. Although Arsenal could equally do with his presence, they already seem occupied with one marque signing being Alexis Sanzhez, and we know what they’re like when it comes to spending money.

However at Juventus, Vidal has become renowned for quick movement through the channels and forming space allowing team-mates to pose goal threats. He even pops up with a few goals himself and when you consider the lack of goals United have even scoring from midfield it strengthens the argument even further.

Both Manchester United and Arsenal have suffered through the centre ever since the departures of Roy Keane and Patrick Vieira, respectively, with the pair being irreplaceable enforcers who could dictate a game. When you look at both sides, especially on paper, the Gunners are superior through the centre but it is an area United are now looking to drastically improve.

While Wenger stated the Chilean is “one of the best midfielders in the world,” Van Gaal confirmed that he “always wanted to buy Vidal” before he joined Juventus in 2011.

So, could we be seeing Vidal playing Premier League football next season? Would a player of his stature be willing to move where there is no European football despite joining a rebuilding force that may one day rule world football again?

If anything, Louis van Gaal has a knack for getting clubs back on track and judging by his tactical awareness and interest in youth development, it would be highly questionable to bet against Manchester United’s superiority.

One thought on “Where next for Arturo Vidal?”